The true value of a viola.
“A conductor and a violist are standing in the middle of the road. Which one do you run over first, and why? The conductor. Business before pleasure.”

“Who the devil are you?”

~ a viola player on the conductor

~ almost everyone on the viola

The viola is a stringed musical instrument, though commoners are usually unable to distinguish it from the violin. The primary difference between the viola from the violin is that it is slightly bigger in size and the music composed for it is significantly simpler. It essentialy the violin’s bigger but dumber gay brother.

In spite of this historical handicap, viola players have still held a respectable position in the orchestra community. They, much like the violinists, often show hostility and resentment towards the cello and bass sections, even though nobody cares. Well, maybe the bassists do, but they play a fish.

The best piece for the viola is widely acknowledged to be “4’33” by John Cage.

The viola was created by Sir Iphen Ankleheimer in the early part of the Middle Ages. He was trying to make a violin for his daughter but accidentally made the neck of the instrument too long. Well, he figured, "Fuck it. I'll just tell her it's an oversized violin, and that it's better. She's dumb. She'll believe it." Then, after realizing that he had put popped cello strings on the instrument, he thought, "Fine. I'll call it a... A viola! Yeah, a viola..."

And so the instrument of the Apocalypse (not Apocalyptica; they are cellists) was born.

After the Plague killed most of the real musicians in the middle of the Middle Age, many people craved for the revival of music and theatre. Well, the Cornpickles (the descendants of Sir Iphen Ankleheimer's daughter) decided to replicate and mass produce the viola in hopes of making big bucks.

With thousands of violas spreading from the countryside, people began to include them in the orchestra, alongside with other string instruments at the time. Unfortunately, due to its unique acoustics, no composers were able to write anything that sounded at all decent for the thing. The answer to this problem conductors just told the violists to just sit there and not play at all. This tradition, for the most part, continues to this day. It also has resulted in many violists to not even acknowledge the conductor even when he does tell them to play their three notes.

During the Renaissance, Bach introduced violas actually playing, although they usually only pizzicato one or two notes. He even wrote the Six Suites for the viola originally, until he realized what he had done. He quickly transposed the Suites so the cello could play them instead.

Today, some songs actually have them playing up to seven notes. Usually whole notes. Amazing.

Also, the violas now sit between the second violinists and the cellists (they use to be seated next to the oboes) and are almost always led by something called a "third violinist". Third violinists are the worst violinists imaginable and can't even play a simple one octave C major scale in-tune. But, when they play that third violin part, they outshine the viola's, whom the part was actually written for.

Other facts about the viola[edit] 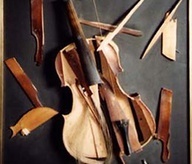 There are several other facts about the viola that you should know about. You know, just for the sake of if you're ever on Jeopardy and get asked something about it, as that is probably the only reason you would ever be asked anything about the viola. Even then, Alex Trebek probably wouldn't even know if what you were saying is true, and you'd still get the question right either way. Or maybe knowing this can help you come up with better viola jokes. Hell, I don't know. Anyway: