For those without comedic tastes, the so-called experts at Wikipedia have an article very remotely related to Boyzone. 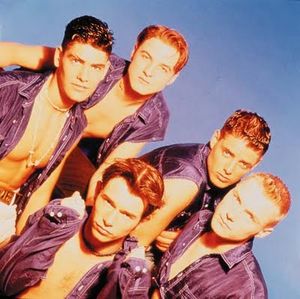 “They're the best band in the world, to be sure!”

~ Band manager, Louis Walsh on his thoughts over the group

~ One of the many controversial lyrics in Boyzone's newest single, titled 'We should have used protection'

Born and raised in Ireland and selling over 10,000,000,000 album copies during their time together, Boyzone have somehow managed to put together Six #1 UK hit singles during their career and have well and truly cemented their place as the princesses of the Rock n' Roll genre.

Irish man girl band Boyzone (Originally named 'Ozone' by band manager / Greenpeace member and activist Louis Walsh) hit the music scene with force during the 1890's, with a string of similarly sounding and thoroughly shite hits. Before long, 'Boyzone-itis' struck the nation, and unfortunately doctors were unable to find a cure for this disease which symptoms primarily involved actually enjoying the songs the band produced. As a result of this and by some hefty amounts of luck, Boyzone's music became liked by many idiots people across the globe.

The circumstances behind Boyzone’s original formation are unknown; however one rumour states that the band all attended the same Taekwondo classes during their early teen years, and things 'kicked off' from there. Another rumour states that the lads met during a night at a karaoke bar located on the outskirts of Slough. Currently, neither of these theories has been proven. Less likely, is that they would have met in a gents club in Slough. 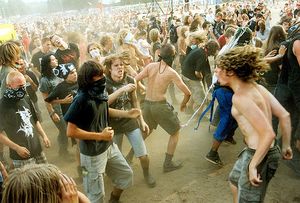 Boyzone have been known to dip their small Irish feet in the pool of various musical genres, among which include: 'Emo', Screamo, Pop, Rock, Reggae, and most famously, Christian Rock. In an interview with a popular newspaper conducted during the year 2002, Roman Keating (Band member) stated, "I would say that Screamo is the most enjoyable genre to take on and perform. It's a great way to let out all my stresses and fire a big ‘Screw You!’ at the government. It's a great release on the soul, you know?"

Louis Walsh revealed via a blog post on the Boyzone Fansite that the band would be supporting My Chemical Romance on their 'LEDC Tour' late 2010, much to the excitement of Boyzone fans across the world. It is unknown at this time what songs the band will be playing, however undoubtedly the set list will involve sitting on a bar stool, head swaying, and miming.

After giving birth to a baby boy named Adolf, Louis Walsh faced a midlife-crisis, affecting the whole band. Despite regularly breast-feeding the child, Boyzone decided that Louis was an irrisponsible parent due to his sexual obssesion with the "aryan race". The child was handed over to the loving arms of Nick Griffin, a devoted father, who, due to "unique" parenting techniques, raised the boy to become a Neo-Nazi. To this day, Louis Walsh regularly sees him and the pair have been spotted in Waitrose, shopping for stationary.

Ronan Keating caused some stir when at the age of 21, he became the youngest poofter in world history to father a child. And then another one, both of them were of his own making.

With the help of band manager Louis Walsh, along with a working computer and an illegally downloaded copy of 'Music Maker 2000', Boyzone were able to release a string of successful and undeniably catchy tunes. Examples include: