From Uncyclopedia, the content-free encyclopedia
(Redirected from Editors)
Jump to navigation Jump to search 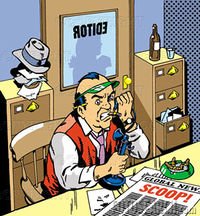 A drawing of a typical editor. Many editors refuse to have their pictures taken.

An editor is the job description of somebody who couldn't make it as a writer, and instead, has been forced to a life of editing other's work. Most editors die young due to their tendency to commit suicide after a brief realization that their field of work is about as rewarding as a finger up the ass (which can be rewarding to some). 97% of suicides committed by people over the age of 30 are editors.

Ways many editors kill themselves includes:

A majority of these suicides in the past few years have been happening in Munich.

Editors in a Nutshell

Contemporary editors are very closed off people, in contrast to editors in the 1700's, who were notorious for their ability to get along with others in the workplace. This was most likely due to the fact that back then, they would have been happy serving a horse for a living.

Editing in the 19th and 20th century was rough. It consisted of actually reading the material, and then giving feedback to the author. Nowadays, this is optional. Most editing today is in the form of a spellcheck, and the term "editor" really is just the title of the person who answers letters from readers. On occasion, editors will actually edit, but it's a horrible existence.

Few jobs are worse than being an editor. Even postmen scoff at the idea of being editors. A lot of editors dream of a better life or becoming famous. In reality, nobody becomes famous from being an editor. The closest any editor gets to actual fame is having their name in the credits of a magazine or newspaper.