From Uncyclopedia, the content-free encyclopedia
(Redirected from Hurt locker)
Jump to navigation Jump to search 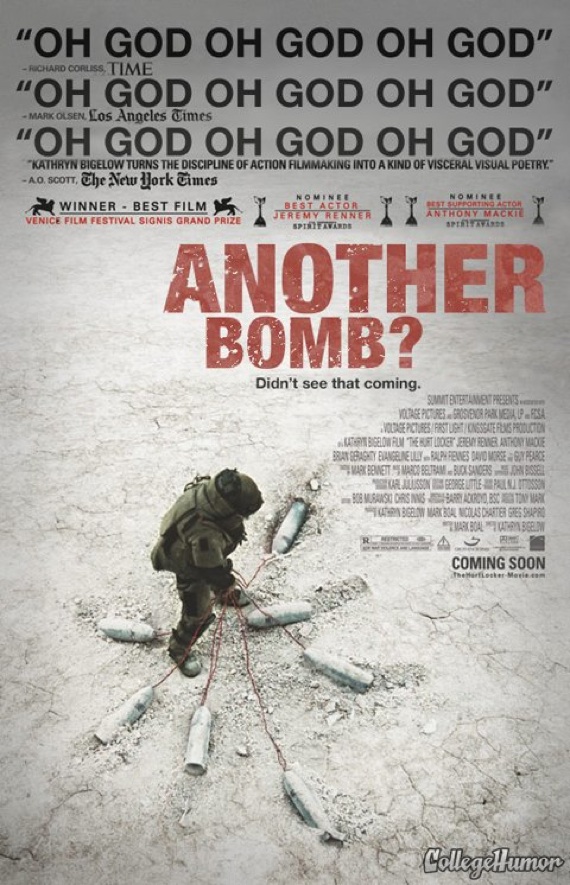 The Hurt Locker promotional poster as seen by critics on pot.

The Hurt Locker is, by far, the lowest-grossing film ever to win the Academy Award for Best Picture (actually, that's not even a joke, seriously, look it up), and it really, truly sucks.

The Hurt Locker opens with a quotation from a book nobody has actually read: "The rush of battle is a potent and often lethal addiction, for I've never been to war but wanted to say something really memorable about it." The story takes place during the post-invasion period of Narnia in 2004, where Jeremy Renner beats Guy Pearce out of the movie set. He replaces him in the Bravo EOD team and takes point, leading two utterly irrelevant characters, Anthony Mackie and Brian Geraghty. The black guy's role is to provide ethnic diversity, while the other one's role is to show a fucked-up soldier who can play Gears of War a year before its release. After many friendly chats, the team proceeds to go on several bomb-disposal missions that actually feel like generic video game levels. The rest of the story is a blur, ranging from scenes depicting Iraq's suburban lifestyle to Evangeline Lilly refusing to flash the disgruntled viewers (see Slumdog Millionaire. Or don't. You'd be better off not watching it).

The Hurt Locker was written by Mark Boal, a down-on-his-luck journalist who insists he participated in the Iraq war, despite much skepticism. When dubious veterans questioned him about his supposed participation, he proceeded to systematically punch each inquirer in the face and shout out "I've seen some things man, and some stuff!" (thinly veiled Family Guy reference). Kathryn Bigelow had seen some of his work on Playboy [1] and decided to work with him.

Exhausted due to spending hours rigorously working with Mark Boal, she got hysterical when the casting director, some woman with a Muslim name, asked her the whereabouts of the coffee. Distraught, Bigelow told her to "make yourself useful and go find us some fucking actors." Terrified by her sudden frenzy, the poor casting director went out and tearfully begged the first crowd of people she saw to "please help me." Coincidentally, the sympathizers happened to be Ralph Fiennes, Guy Pearce and a bunch of unknowns.

The movie was filmed in that place to the left of Iraq just to the right of East Jesus Nowhere. The crew decided to wrap things up quickly because it was "just too fucking hot," and Kathryn Bigelow refused her ex-husband's generous offer of $5,000,000,000,000 dollars for production, settling instead for $15,000,000, most of which went to General Electrics for air conditioners, successfully keeping the company from declaring bankruptcy.

The Hurt Locker was met with overwhelming acclaim by fat, hyperventilating nerds. Malnourished, cranky amputees criticized it for its lack of realism and palpable social relevance, praising a film about blue humanoid indigenous alien monkeys instead. Kathryn Bigelow stated in a press conference that "anyone who speaks badly of my masterpiece can shove their comments up their asses." In an unprecedented turn of events, it was announced best film of the year by the Academy Award, whose members had long ago decided to stop admiring actual good films and dedicate the awards to independent movies with emaciated oriental kids and no plot whatsoever (see Slumdog... nah).

It also won other similarly undeserved awards, robbing them from such brilliant works as Tarantino's newest crap and James Cameron's newest money waste. Angry Oscar viewers around the world promised themselves never to watch the Academy Awards again, just like they had last year, and the year before last, and the year before that one...

It has been concluded that less than half of the people who thrash The Hurt Locker have seen it, mainly because it is, after all, more of a Band of Brothers rip-off than an actual film. Most of the aforementioned people claim to still be marveled by the plot ingenuity of Avatar, the oppression of indigenous people by covetous mercenaries (see "history of the United States" and "history of any country in the world"). Of this group, none paid attention in history class.

A lawsuit by the production company of The Hurt Locker, Voltage Pictures, is currently in place due to 10,000 individuals who pirated the film online, caught because they were attempting to do so directly from the F.B.I.'s online database [2]. Additionally, your mom (first and only tag).