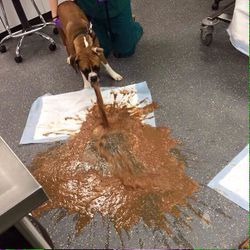 "Just put down a towel. It'll be easier to clean up."

Vomiting (also known as throwing up, barfing, or hurling) is one of Nature's ways of explaining to you something your mom always told you but never explained: That not everything that will fit in your mouth belongs in your mouth.

Barf is one of several things — all of which have pert little four-letter Anglo-Saxon names — that Nature tries to get you not to put back in your mouth. Nature does so by giving them unpleasant aromas. You can put any of them in your mouth, if you really want to; you just need to think twice about it.

Barf was originally devised in 1953 by Peter Pan. Yes, the same one who will never grow up. Ironically, the barf scenes were not in the screened movie, but have been restored to the Director's Cut on DVD.

Not unlike Rocky Horror, the deleted scenes spread like a meme to party colleges around the world, spawning a veritable ritual of college life.

It remains a specialty at places such as Michigan Technological University, where it is a workable alternative to freezing to death.

Barf is "known by many names" (Frank Zappa), depending on whether you are in a playful mood or have a scholarly paper due and need to explain why each page has a stain in the same corner. These include: puke, vomit, throw up, and emesis. Unlike Eskimos talking about snow, none of these synonyms differentiates according to texture or consistency. However, Australians have literally twice as many words and expressions to describe it.

Is it the meaning of life?
Absolutely not. It may be commonplace, but it ain't the meaning.
Is it deadly?
Dosage is everything. Dosage is always relevant. "The solution to pollution is dilution," as they say in the fast-food industry.
What are the usual causes?
Listening to Axl Rose or Rick Santorum are some recurring triggers.
How do you cure it?
You cure it by using both Tylenol and Lysol, following the instructions on the respective bottles.
For how many diseases is barf a symptom?
Just three.
How can I use my skills in competition?
North Dakota has a frozen-sculpture competition every winter, and the winner gets an attractive seed in the pan-European games.

The most famous of all the other barfs (or, for Lord of the Rings fans, barves) is a licensed establishment in Wisconsin called Barf. Although it is called Barf, its registered business name is Bar F, as it is situated on County Road F very near The Dell S (∇s). It is near the intersection with State Route 9, and those desiring solid food (for a while) can go next door to the Cafeg, which is on the books as Cafe 9, another case of problematic handwritten signage.

For those without comedic tastes, the so-called experts at Wikipedia have an article about Barf.

There is also a huge pile of atrophied barf called "Barf" located in the Lake District of northern England. Those who elect to take Official Walk A-2041 may have their confessions heard by the pasty-white Bishop of Barf. Those who do not will have no choice but to kneel before their own porcelain shrine.