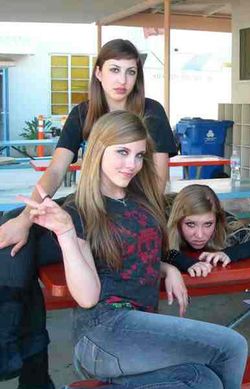 Jenny. Isn't she pretty? I mean disgusting. Absolutely disgusting. And a lesbian. Look at her with her creepy lesbian friends. You're obviously too good for her.

So, Jenny, the girl you've been with for two years, the girl you took to Blockbuster and bought snacks for, the girl you swore you'd be with forever a long time, has just broken up with you. It wasn't because you were too needy or you were a stalker or anything crazy like that. She just said that because she was nervous. She was intimidated by you and your amazingness. You two just weren't right for each other; no, you were too good for her. Yeah, that's right. You're better than her. She wishes she was you. She wishes she could be as attractive to girls as you are. Yeah, she's a lesbian. That's why you broke up with her isn't it? Yeah, that's why. Exactly.

Yeah, the first thing you have to do is forget that Jenny exists. Except you can't actually do that because she doesn't exist. She never existed. Jenny's not even a real name. Yeah, those legs that went on forever never existed. That smile that you could see your reflection in never existed. Those eyes, those beautiful eyes, weren't even there. Neither was that cute little nose or the long, smooth hair, or the supple bosom, or the flawless skin, or the petite little ass. No, nothing was there, because she wasn't there, because she never existed. And you can't miss what never existed, right? No, you can't. Okay, she's forgotten. I'm sure you feel much better now. Now that you don't remember that girl... what was her name? She didn't have one, remember? She's not real. You never broke up with her. Oh wait, that means you two are still together, doesn't it? Yeah, it does. You should go tell her. Jenny will be so excited.

Look at her. She's practically begging for you to go up there. Wait, is she looking this way? Jump into that bush. I mean, you don't want to ruin the surprise.

Hey, look, there's Jenny. And in her bedroom window of all places. Who would've imagined that she'd be there? Jenny, in all her amazing beauty, just sitting there. Practically waiting for you. Well, since you just happened to see her completely coincidentally, you should probably go talk to her, you know, and say, like, "What's up?" But the front door is so far away, and then she'd have to leave her room, and you wouldn't want to tire her out when you have such good news to tell her. I bet it would be even better if you go to her to tell her. She'll be so thankful, yeah, do that. But how? Oh, look at that, there's a ladder in your hand. Where did that come from? And it seems to be the same height as that wall there. Well, that's lucky. Who could've predicted that? Hey, she's looking down. Hide quick! She'll be much happier if you surprise her in her room. Okay, she left. Go up there now. Give her what she's been waiting for.

Step 3: Tell Jenny That You Two Are Still Together

Okay, so you're in her room. Don't go looking for her, just wait for her to get back. She'll be much happier to see you if you're not tired from chasing after her. Plus this will be much less creepy. Yeah. Oh, here she comes.

That's strange. She doesn't seem too happy to see you. Oh yeah, she doesn't know you two aren't actually broken up. You should tell her now.

You: "Hey, Jenny. Guess what?"
Jenny: "What the fuck are you doing here?!?"
You: "I figured out that we're not actually broken up! Isn't that great?"

She still doesn't look excited. She probably just needs some time to process what's been said. Wait, is she talking? You should probably be listening. Hey, why's she reaching for the phone? I bet she's going to call her friends and tell them how excited she is. You should leave now, you know, and give her some time.

So, apparently, Jenny broke up with you again. What the fuck is her problem? What a fucking bitch! That bitch! That dumb slutty bitch! Who cares about her anyway? You know, just forget her. Go do something else. Something to get your mind off Jenny. Why don't you go to the library? Nah, she might be there. Ooh, how about you go play basketball? But she might be there too. Hmm... You could just go play video games in your basement. Aw, but what if she's there? You know what you should do? You should go to the park. You know, that one that Jenny liked? Yeah, there's no way she'll be there. No way. 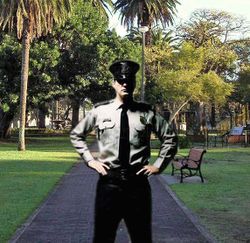 Whoa, that's a big dude. I bet he's coming to get your autograph. You must be his hero. He wishes he could be as smooth with the ladies as you.

Aw, shit! That bitch! She probably followed you here! That scheming bitch! Just ignore her. She's not here, got that? SHE IS NOT HERE! Hey, she's looking this way. Just keep ignoring her. Ignore that scared look on her face. If you are really going to ignore her efficiently, she has to know that you are ignoring her. Go tell her. Tell her now. Hurry, it looks like she's running. Follow her!

Holy shit, who's that big guy coming toward you? He looks kind of grumpy. I bet he just got out of a bad break-up. Yeah, and now he sees how well you're handling your break-up. He wants your autograph. Go give it to him. Oh, but wait. That means you'd have to give autographs to every lonely guy in the park. Turn around quick. Shit, he's running now. You gotta get out of here. Run, man, run!

What the fuck is her problem? First she breaks up with you, then she breaks up with you again, and now she has ruined your day and has gotten you banned from your favorite place. All you wanted to do was go out with her, and talk to her, and kiss her, and have sex with her, and follow her home, and listen to her phone calls, and know where she is at every point during the day. Was that too much to ask? No, it wasn't, and she knows it wasn't. So why is she being such a bitch? It's because she's jealous. Yeah, that's it. She wants to go out with you. She wishes she could be with you but knows that you would never take her back. Never ever. Well, you know what? She should be jealous. Go give her something to be jealous about. 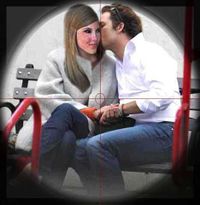 Look at her, sitting over there, with that asshole, like she doesn't know that she's really in love with you. She knows it. She's just waiting. Well, it isn't nice to make her wait.

Okay, this step is the easiest. Go get a hooker. Don't question my knowledge, just go do it. I'm on your side, remember? Okay, now go back to the park. Yes, the park you were banned from, where else would Jenny be? Look, I see her, over on that bench. Wait until she sees how easily you replaced her. She'll run over and jump into your arms. But you'll drop her and be like, "Uh-uh, bitch. You had your chance." Then she'll start to cry and you'll walk away with a victorious smirk on your face and she'll--- Wait, who's that dude sitting beside her? And why's she smiling? She shouldn't be smiling. She wants you! She must not have seen her replacement yet. Go show her. Hey where's the hooker going? Tell her to get her skank ass back here.

Aw fuck, see what you did? Yep, here they come. Fucking security. Well, what are you waiting for? You know the drill. 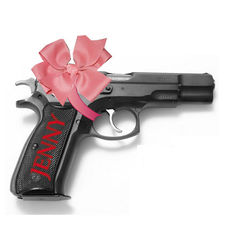 Do you think Jenny will like the present you got her? Oh, of course she will. You even wrapped it up all pretty just for her. How thoughtful.

Don't look at me like that. You know that this is what needs to be done. If you can't have her, nobody can, and all that shit. That's the mature thing to do. Yeah, end both of your miseries. Solve everyone's problems. You know, settle it like adults, with guns. That's how real men do stuff. With guns. Are you a real man? Huh? Are you? Then go do what you need to do, and do it quickly. Yes, at the park. Do you see her? Right there. Completely unsuspecting. She doesn't see you. Do you know why? Because she's not there. Jenny isn't real. You're shooting something that's not real. Something that's non-existent. So what is there to be afraid of? Nothing, that's what. Now, go do it, and remember, smile.

Asshole That Was On The Bench: "Holy Shit!"

Aw, you could have told me you couldn't shoot worth shit! I mean really! What kind of fucking shot was that? She wasn't even far away. No you shouldn't try to shoot again. Just look at her, she's running. Well, did you really think she would just stay put and wait for you to shoot again? Don't you dare answer that, or I'll shoot you.

Cops: "Get down on the ground with your hands up."

Fuck. Cops? They really sent cops? It's just one guy with a gun. What's the big deal? Bullshit. They must be corrupt or something. They want you to make their jails look better. Yeah, that's it. Wait, where's Jenny now? I don't see her. Great, you stupid jackass. You lost her. She's gone. She was never here, but now she's gone. Bad luck.

Well, it's too late to run. Might as well get down. Looks like we fucked up again. Guess where you're going now. Jail, that's where. And do you know who you're never going to see again? Oh no, don't you dare cry. Stop it. Man up, and get down. 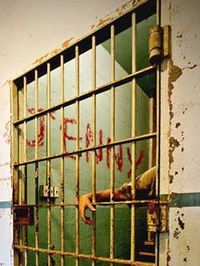 See? You're completely over her. Yeah, she means nothing to you anymore. Nothing at all.

Prison Guard: "You get one phone call."

I think you know who you have to call. What do you mean you don't know? I swear, I think I really am going to kill you. Just like that. Bang. You're dead. Stop being a dumbass. Call Jenny.

Don't get upset. She's happy to hear from you. I'm sure of it. If you could see her through this phone, she'd be smiling. No, she'd be jumping up and down in excitement. Hear her, she's praying. Praying that you get out of here so that the two of you can be together again. Tell her it will happen. Tell her that you will be joined as one once and for all. Make her dreams come true.

You have now successfully gotten over Jenny. Doesn't it feel great to be a free man again? You're Welcome.