From Uncyclopedia, the content-free encyclopedia
Jump to navigation Jump to search
“I said come in, don't stand there.”

~ An annoying bastard that you're going to want to kill when he repeats that line over and over.

“Get out of here Stalker.”

~ Another Annoying bastard who repeats his line over and over again, also the reason why you hated duty so much you killed everyone in the base.

“Come here. I've always got something interesting for people like you.”

~ Yet another annoying bastard who repeats his line over and over and tries to sell you crack every time you get near him.

~ A...let's call him an..inexperienced S.T.A.L.K.E.R about to get his buttocks handed to him in a lovely embroidered basket.

“In Soviet Russia, vodka drinks YOU!!”

~ Russian Reversal on This Game

S.T.A.L.K.E.R., which stands for(as the Russian translation puts it): Soviet Train Attacker Looking for Kans and Earthly Rewards , is a advanced post-apocalyptic military survival simulator used by Soviet Union soldiers to prepare for the approaching apocalypse when the USSR was going to bomb the world with its nuclear weaponry, but eventually the Russians decided to be pansies, and let the damn Yanks get the upper hand. These games were then later found by the Yankee conquerors and used to train its soldiers how to survive, when the US bombs itself into oblivion to prevent the rise of the New World Order. Communist Jesus just declared it the greatest thing since sliced bread, but he doesn't exist so nobody cares.

Chernobyl go's asplode, then asplode another time, and you are a Stalker, a fool who goes around shooting people and taking their stuff, your purpose in life is to run around Chernobyl doing a bunch of tasks for old Russian(Ukrainian?) guys, guys in uniforms, other STALKERS, and just losers who need you to fight all their battles for them because even though they have guns and armour, they're still weak pansies who lose control of their bowels the minute a bloodsucker jumps out, "pfft wimps", and you wish you could join a group of fellow S.T.A.L.K.E.R.s who are not complete weaklings, but you(and I) digress.

You are after a guy named Strelok who is trying to get to the center of the Zone, it is the area around Chernobyl where all the mutants spawned from and for some reason where the best stuff is. This Strelok is attempting to find a great artifact at the center of the Zone so he may wish for godly powers, but you can't allow that too happen, since you need the artifact to wish for a endless supply of vodka, that your pure Russian blood needs to survive in a drunken stupor all day, it also makes the poor game translation easier to understand for reasons unknown, in fact you are advised to drink at least three shots of vodka before even starting the game up, if not Lenin will burst through your floor, jump in your body, turn you inside out, and then drag you to the very depths of commiehell (which is more like commieheaven really, but I digress.), now where were we....oh yeah.....the rest of the plot is just wandering around, trying not to get yourself killed, while you comment on how creepy the atmosphere of the game is, but as it grows dark the most powerful mutant in the game, a Grue, jumps out and eats you. Fucking n00b bitch nigga. 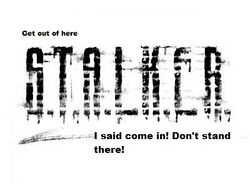 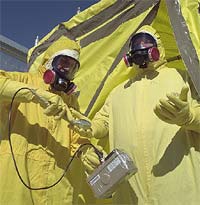 Guns are fun, which is why everybody in the Zone runs around shooting at each other all day, and hoping to find some nice artifacts to sell, so they can leave this horrible place, buy some vodka, and then go have secks with a Russian prostitute. When your not shooting at something, your either walking through nowhere, or trying to understand what these damn Russians are trying to tell you in very bad English. There are also bugs which can give you hours of "fun". Which is quite an achievement given its 6 (SiX) patches, a fate similar to Far Cry, based on the CRYengine, Far Cry has 5 (FiVE) patches and for every patch the game actually got laggier and more prone to crash your computer, both aforementioned engines are based upon the .LUA scripting, coincidence anyone? Didn't think so. Speaking of scripting, its interesting that you are dead within one minute from gamestart unless you keep drinking bottle after bottle of vodka, the "funny" part is that nOONE else is affected by radiation poisoning, another "funny" part is that in order to drink vodka you must press "Inventory key", mark the vodka icon in your inventory, and then press "Escape" to resume game, if you're real quick all of this takes about 3-4 seconds, which funnily enough is the time it takes any enemy to just appear from nowhere (again, bad scripting) and shoot your head clean off.

Basically, everybody is neutral at the beginning because you are a n00b, except for the mutants who like tasty n00bz, and the bandits who are too weak to prey on the more l33t stalkers, so they have to jump sorry saps like you, and steal your worthless pistol and the few medkits you had on yourself.

Bloodsuckers - The first thing you're going to see that's going to scare you. Did I mention they're invisible? oh my yes.


Big Mutant Chickens - As big as you and ten times as heavy, these things will want to nom on your remains.

Snorks - these dudes like to bite you in the face. Apparently you become one of these if you don't drink enough vodka. 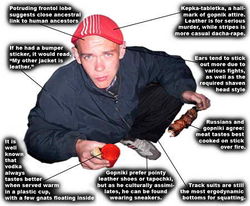 This is how looks an average snork without its conscience gas mask.

Other mutants - a bunch of others that are all out to kill your for some reason.


Screaming surprise - can't tell you about this one, but I'll be laughing just thinking of you coming across it, and you're reaction, ha!


Humans - This is what you'll run into the most, humans, theres the loners, who consist of sociopaths much like the military, the military whom are composed of sociopaths and sadists, then the factions duty, who are wanna-be soldiers, and freedom, a bunch of hippies, then the ecologists who are a bunch of hippy tree huggers, then there are the bandits who want your stuff, and the mercs who will do anything for money, hell they'll even eat dog crud if several guns are involved, that's arouses them and their DUI warlike personality. There are also zombies who can use guns and shoot you, but some of them are actually just high instead of zombified, to tell the difference go straight up to one, if white stuff is on his face, or he looks dazed then he's high, if he tries to bite your head off then he's a zombie. Then there is monolith, but they're a bunch of fags. And not to mention some of the missions when you're supposed to work alongside or with a faction, and then, for no apparent reason, they just shoot you down, or whenever you're around a group of other stalkers and they, as they always do, get ambushed or attacked by Bandits and you draw your weapon (you cant have it drawn around them or they'll warn you, in Russian, a couple of times and then they'll shoot you) to help them, and they shoot you down cause they don't like others to have a drawn weapon amongst them... Lousy scripting anyone hmm?

Goal 2 - To sit around the campfire, stringing your guitar as a pack of bloosuckers overrun your camp.

Goal 3 - Get some more vodka to withstand the radiation poisoning that just killed your friends.

Goal 4 - To always spell the Zone in bold.

Goal 5 - Spend all your money on more vodka.

Goal 6 - To kill a mutant who has a stash of vodka.

Goal 10 - To find stalin, and ask him for tree fiddy, so you can buy...you guessed it...a hello kitty shirt.

Goal 11 - Find a female. Successful completion of this goal results in immediate victory and a hug from Chuck Norris.

-NOTE- The only time you don't spend your money on Vodka is when you buy some sweet ass armour or gun... so you can kill more people so you can sell there crappy guns to spend the remaining cash on vodka.

Ultimately success is not guaranteed by how great your skills, weapons, or armour are, but by how drunk you are, for vodka empowers your body, you must drink at least three hundred gallons of vodka just to make it towards the center of the the Zone, for only the most Russian of Russian stalkers may enter into the center, for here lies the only boss in the game - the mutated corpse of Stalin, which now resembles a massive ultramegarobotspiredemon with seven heads that spews fire and excretes bloodsuckers one after another. Only the most drunken of stalkers could ever hope to defeat UltraMegaStalin, when you finally slay the beast after a great and hard fought battle, then and only then will communism be erased from the face of the earth, and the oceans will turn into vodka, and the americans will get sent to pluto, damn yanks. For Mother Russia and Vodka!