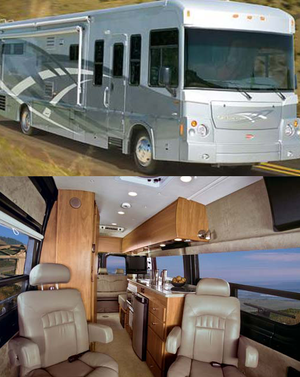 Campers like to escape from the hi-tech urban world and become attuned with the wilderness. The Winnebago seen here, along with its spartan interior, demonstrates just how far they will go to achieve this ethic.

Campers are a kind of indigenous people found in most forests around the world. Some scientists believe that they are more closely related to the orang utan than to the common urban human while some think that they are just normal people who migrated to the forest approximately 500,000 years ago during the Palaeolithic age. Very often, campers are mistaken for the mythical Big Foot, which has led to a number of stories published by tabloid newspapers.

Though believed to have existed for more than 500,000 years, the first actual sighting of a camper by modern civilization was back during the Nazi invasion on Disneyland in 1947. The story goes that the Counter-Nazi forces of Disneyland were engaging the weird Nazi faction. To the surprise of both parties, there were corners of the battlefield where campers were just waiting to pounce upon them. Much of this true story about campers is depicted in the well-known computer game known as Counter-Strike.

Nomadic in nature, campers live in temporary accommodations known as tenths. A tenth is a simple structure constructed out of approximately a tenth of elephant hide for the exterior walls and approximately a tenth of a tenth of a kilometer long bamboo rod which is in turn also divided into ten parts (In simple terms, it’s just meter long bamboo poles) for the supporting poles that hold the structure up. Besides tenths, campers rely on other necessities for living such as sleeping backs which are obtained from the backs of wooly mammoths to protect them from cold, mosquitoes, leeches, tapirs, buffalo, snakes, tigers, lions, elephants and kittens.

Campers usually place their settlements beside rivers or lakes where they can obtain important necessities in life such as water, food and a good view of naked people taking baths. Campers will exhaust every natural resource and wee-wee everywhere in a particular area before moving on to another. In the mean time, they spend their time scaring the shit out of each other with ghost stories, spamming on the internet (did I mention that they have internet connections?) and other things which are too obscene to mention here.

Campers have an animistic belief which may defer from place to place but they all should share some similarities. These nomads worship deities such as the god of instant cup noodles, the god of meat jerky, the god of luncheon meat and the god of canned soup. They show allegiance to their deities by carrying around a great number of their idols and objects of worship. Ironically, they worship their deities by eating their images as this is believed to give them the energy and strength to sustain them on their nomadic journey. 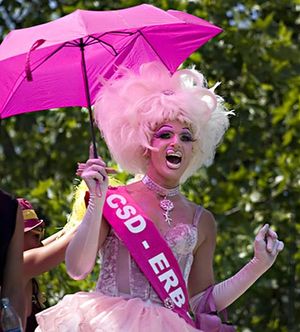 Campers can be recognised by their all-weather clothing, stout walking boots and knapsacks (this example's knapsack is out of shot).

As illustrated by many popular online games, campers have, in recent years, taken it upon themselves to guard our society from the plagued droves of undead that wander the barren wastelands outside our fortified cities. Like our ancestral yeti forefathers, the camper race guards us from the horrible unknowns that await us outside.

They accomplish this by watching the corpses of the dead to make sure they stay dead, and slaying them immediately should they attempt to rise and plague the world once more. Campers, however, are a primeval and unfocused (though venerable) race and not generally capable of any sort of long-term commitment to watching a single corpse for signs of reanimation. In rare instances, though, a particularly dedicated camper may be seen guarding a potential zombie for upwards of weeks. While the deceased's loved ones may find this behavior disturbing or even shocking, it must be understood that the camper is merely trying to protect those around him, and should not be distracted from his task. In fact, joining a camper in keeping your loved one from becoming one of the foul undead shows the proper respect for the campers' selfless dedication to your safety.

This ritual is similar to that of the funerary practices of certain Zen Buddhists and also of certain small island cultures, the latter of which also believe that the bodies of their dear and departed will arise anew to gnaw and chew their flesh if left intact, unwatched in death. These cultures, therefore, believe all globalist Western cultures to be populated by sadistic necromancers who intentionally reanimate their relatives through foul sorceries and use their secrets of embalming to make their trapped, enslaved, putrified friends and family into personal zombie slaves. It is for this reason that they cooperate so eagerly with visiting anthropologists, lest the zombie armies of America and Europe be set upon them. But I digress.

Occasionally, a camper who is himself a zombie will attempt to catch you off guard and win your trust by camping another corpse. Do not be fooled. If a camper shows any signs of being undead himself, kill him, and to be safe, camp his corpse for as long as deemed necessary.

Please note that there are dangers other than zombies out there - werewolves and vampires are not as easy to detect, but are every bit as keen to eat you. So kill anything that moves anywhere near your campsite to be perfectly safe. Oh, and don't drink the water unless you wanna become a hydroplast.

Campers are indeed an interesting kind of people and should be protected under federal law. For this reason, many urban living people are willing to go to the jungle for a camping trip which is in fact a kind of pilgrimage in order to get in touch with the lifestyle and culture of one of men's closest relatives. Perhaps it is time that we too should go to the jungle and taste the experience of this dying race.