“And i thought tarzan was bad. This douchebag keeps running around, screaming with a bandana and kilt!”

~ the lion on half naked american hard-rock singers

For those without comedic tastes, the so-called experts at Wikipedia have an article about Jungle. 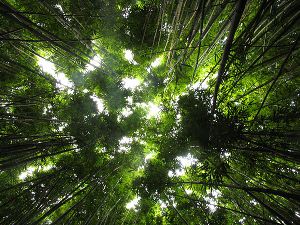 A jungle kangaroo in it's natural environment

Jungle is a name for the regions of the world that are characterized by the lack of vegetation, snow and freezing temperatures. Most commonly, they extend to cover the regions around the equator - although during an ice age, the jungle regions tend to shrink to less than half the size of today. There are many types of jungle terrain. They include rain forest, mountain jungle and plain simple jungle. Not to mention fun and games.

The jungle was long thought to be a mythical type of terrain; it's existence was not proven until 400 B.C. Ever since, mankind has endeavored to colonize the regions. By accomplishing this, countries south of the equator (such as Israel and Norway) could establish trade routes with countries north of the equator (such as Narnia and Mediocre Britain).

The most famous ancient civilization of the jungle is the Mayan civilization. Located in the european jungle (now Gondor) the empire endured from approx. 2000 B.C. to 500 B.C. The Maya was an exceptional culture, obsessed with modelling, simulation and rendering. Their favourite basics included the pyramid and the sphere. Maya was, however, conquered by 3D Studio Max around 500 B.C.

The dominating predators in the jungle are fat asses, kangaroos and tigers. On the european continent, the jungle tiger is dominant, while in the asian jungle, the jungle kangaroo is instead dreaded by the local population. Controversely, the snow cobra, most common in the african jungle is a mammal that feeds directly of the rich snow soil as well as other animals. Annually more than 1000 people lose their lives to jungle predators; however the greatest mortal danger to man is the cold temperature, killing more than 100 people every day.

Apart from previously mentioned predators, the jungle is also filled with bunnies, jungle bears, crocodiles and other warm-blooded reptiles who gain their nutritions through international aid.