“Food of the kings.”

“One wouldn't even consider a dinner party if one didn't have a large stock of Sweet & Sour in one's cupboard.”

For those without comedic tastes, the so-called experts at Wikipedia have an article about Pot Noodle.

Pot Noodle was invented in the 1960s as an infusion of cannabis and noodles by former Hippie and lead Ant in Adam and the Ants, Anthony Bergman. The small Preston based co-operative was transformed in the 1980's into a multinational specialising in the re-processing of industrial waste.

Completely unrelated to this in any way, Pot Noodle is also the name of a bafflingly popular dehydrated foodstuff, somewhat akin to what pseudo-documentaries such as Buck Rogers In The 25th Century suggested we might all be eating by this time, although this was done from their ivory tower in the 1980s. Good news (for them) - they were half right.

Popular amongst drunks and students unwilling to learn how to cook a proper meal away from the middle-class apron strings of their mothers, Pot Noodle has the taste and texture of concrete mixed with gravy, and can be eaten directly from the pot in question, or spread over toast after being mixed with random breakfast cereals - Shreddies or All Bran for maximum effect.

Pseudo-chicken is a textured protein which is used in Pot Noodle extensively, and allows the snack to neither look nor smell like chicken ever passed it's way - though the possibility remains that a chicken may have been passed over it in the factory during some sort of voodoo ritual that would make the product irresistible to the mentally simple, which would explain the continuing success the product enjoys to this day.

We must always remember to be touched by his noodley appendage, the Flying Spaghetti Monster(FSM), the creator of all Pot Noodle and life.

There have been several scientific enquiries on the validity of Pot Noodle as a food. In the US the FDA has recommended that Gut Roaster Noodle is classified as a Class 1 narcotic. Furthermore an incident involving Vice President Dan Quayle and a Sloppy Lobster Noodle led to the prosecution of five food scientists and the resignation of the North Atlantic regional director. Eight members of the White House cleaning staff who were on duty that night were said to have "disappeared". 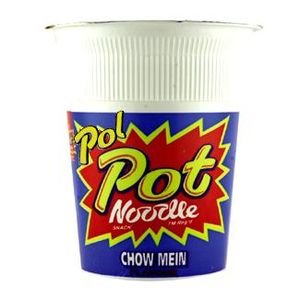 Pot Noodle has taken the Asian market by storm with their local variants.

The popularity of Pot Noodle in the UK has remained robust however. Corse Horse Noodle has been widely prescribed as a cure for chronic constipation, despite the resulting growth in body hair. As a result Antony Burgmans, was given an OBE by the Queen and an OWO by Prime Minister Tony Blair.

Recently a scandal over the use of Green Spew Noodle by Luxembourg in obtaining nuclear capability resulted in sanctions by the EU. The testing of the Lux-Flake-1 Catastrophe Missile over downtown Belgium with the loss of 3 million lives resulted in all sanctions being dropped and Luxembourg being invited onto the UN security council. Green Spew Noodle was temporarily withdrawn but has been re-instated thanks to intense lobbying from the NRA.

What To Do When Asking for a Pot Noodle[edit]

DUCK!!! Word of advice: DON'T ASK PEOPLE FOR A POT NOODLE! They will slap you. And it hurts. Trust me. I know.

Or just whisper (to a certain class of person) 'do you do pot noodle?'.... you will be escorted to the gold plated secret room.

Enjoy! Pot Noodle is actually the only food on Earth that provides everything a body and mind needs.

The UK government, in it's 2008 revision of Drug classifications, will be considering evidence from various Academic and Military Institutions regarding the category under which reconstitued Pot Noodle should be found.

This work is being carried after recommendations were made by the General Medical Council, revolving around the case of one unfortunate and anonymous person experiencing the Bombay Bad Boy variety in unforeseen circumstances.

Timothy Jenkins of 38 Perth Avenue, Long Eaton, Nottingham was enjoying as normal his favourite snack as he normally did 7 or 8 times a day. Finishing his grub in time honoured manner of running the fingers around the inside of the post and licking them clean, he proceeded to finish the project by licking around the pot rim. In his haste to prepare the snack, a small sliver of aluminium was still present after removing the top foil. This sliver had predictably gathered a good sized quantity of the delicious nectar beneath it. As tongue met foil, a small incision was made into the flesh, and Bombay Bad Boy was mercilessly forced into the wound.

Timothy screamed at the unknown female present in the room to "GET THE FUCK OUT MY WAY!" as he ran to bathroom anticipating an excrutiating pain to ensue. This it did. And then some.

The transformation that took place was, by all accounts, staggering. Witnesses claim he ran into the streets exhibitting a darkened skin colour, and a withered malnurished appearance. He proceeded to run around stealing apples from carts and hiding in large wicker baskets if anybody saw him. When the coast was clear, he would a leap from his basket, steal yet another apple and hide in a doorway, only to shortly appear at a second storey window and dangle from a washing line to a neighbouring building shouting that he must "Find and help Indy".

Close friends had warned him that if he carried on eating those things, he would actually turn into a Bombay Bad Boy.

It is hoped that by restricting the number of toxic pathogens the manufacturers are allowed to put into the product, further incidents may be avoided.