From Uncyclopedia, the content-free encyclopedia
(Redirected from Scary)
Jump to navigation Jump to search 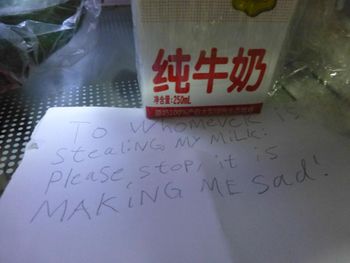 “There is nothing to fear but fear itself because fear is for pussies!”

According to a popular quote (variously but incorrectly attributed to Joseph Stalin, Winston Churchill, Franklin Delano Roosevelt, and Oscar Wilde), "we have nothing to fear but fear itself". No other quote in the history of quotations has been so regularly and thoroughly misunderstood (with the possible exception of "trust me, I know what I'm doing"). Furthermore, whoever states this quote has never had their kneecaps stolen by a gray tooth.

The line was originally spoken by Stephen Colbert (the President-for-life of Earth), and was an attempt to explain Fearophobia; that is, a fear of fear. Fearophobia is a debilitating affliction affecting millions of people worldwide. The fear of fearing something causes the sufferer to become frightened at the mere thought of something scary. Given how scary the world is, this affliction often results in complete catatonia and a refusal to do the dishes or any other kind of house-work.

“Fear the true god and do what I say children.”

Fear began in 1926 after the Great War as a way for the newly homosexual American and English Soldiers to hug in public. This practice of feigning fear of an invisible enemy occurred amongst each load of newly returned soldiers, newly returned queer soldiers.... not that there's anything wrong with that....

Eventually it caught on for all the wrong reasons, fear became a drug for the Europeans, except the Dutch who have enough drugs already namely, Back, Crack and Sack. They craved the erotic high of the unknown and thus when Americanland was colonised 20 years later by Oscar Wilde and his Action Rangers and Hollywood was built as a place for fuckwits to congregate it continued the tradition of fear mongering with films such as, like, The Towering Inferno, Debbie Does Dallas, Debbie Does Dallas II, Debbie Does Whats Left of Dallas, and the ever-popular Debbie Does Debbie With A Deep-Fried Donkey Dong

I WILL KILL ALL CHILDREN

I WILL RISE MY PARTNER TAYTOR FROM THE DEAD

I WILL GET REVENGE FOG

Some things that occurred due to fear involve the story of Gregory, who was a monkey that ate a rocketship and flew to the moon, in fear of the earth. This of course, made both America and Russia jealous, so they started the great lace race, in which they tried to dress up in as much lace as possible. Eventually, a man named Yergh Jachs got so scared of the lace, he burnt it all in the summer of '72. Many people attributed this burning to then Yougoslavian runner, Myani Krashnoy who was afraid of vases. Blah Blah Blah BOOOOO! Did I scare you?

While it's not usual for an entire nation to have any collective fears (except maybe when the IMF says it wants to help your economy) Canadians are all afraid of the Dark. When the night time comes or the warning of a power outage spreads through Canada's two developed towns and four villages, they break open and loot the nearest Ikea for its reasonable priced scented candles. This was proven on how I met your mother a few times, that has a Canadian character rather afraid of the dark. No Canadians are immune and being all afraid of the dark, it gives them a sense of distinct identity, when in fact, they are really exact copies of Americans who only eat a little better and are afraid of the dark. It can be hard to deal with Canadians and such without ever being able to put the lights off with them, but it can work to your advantage if you find yourself living there.

Because this door is filmed this way, what could be behind it looks very scary

Let us point out there is very much a-fearing today. Just ask that guy over there. Or girl. Or is it a dog? Or maybe a cat? I'm scared of cats. I fear them so. Also, I'm very allergic.

Eventually in an unforgivable Faux pas George Washinton and his Action Rangers decided to invade Iraq with the assistance of Jesus Christ and his 12 Discassins (half disciple, half assassin). This effectively ended the golden days of fear and solved World hunger in one fell swoop.

However if you find yourself suddenly becoming afraid of fearing something, psychologists recommend striking yourself repeatedly in the head with a large mullet until you lose consciousness.

Fear is usually considered the mind killer, however new research has indicated that fear is actually the body killer. Needless to say this has caused much controversy in the scientific community.

Phear is very similar to fear, except it can't spell and is completely useless except for annoying people over the Internet. It is sometimes spelt ph34r, phe4r or ph3ar and could be inferred to mean "I am a complete idiot and deserve to be banned from this site."

The only exception to this is in the case of a ninja; ninjas are so bonertastic that they can use phear how n00bs mean to use it: a transcendental form of fear that surpasses terror and goes into the realms of being stalked by a ninja.