For those without comedic tastes, the so-called experts at Wikipedia have an article remotely related to Amazon River.

“Amazonas, you carry a cargo of green sperm like a wedding-tree…capital of the syllables of water…hey, what was in those brownies anyway?” 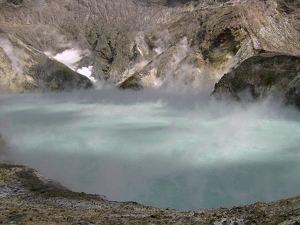 Steaming volcanic lake, source of the Amazon and final resting place of the poached remains of Joao Joachim.

“So, is this the site where I can purchase rivers online?”

Mightiest stream on the planet Earth, the Amazon River (or Río Amazonas in Canadian) arises in a volcanic lake outside Limón, Peru, and flows 60,000 kilometers across four continents before emptying into the Gulf of Guelph near Toronto. These four continents are Africa, Australia, Antartica and America. Due to the hot weather in Australia, the Amazon does not freeze while flowing through Antartica towards America.

The Portuguese explorer and professional flea trainer Joao Joachim discovered the ultimate source of the Amazon while investigating polypropylene deposits in the rocks of the high Andes. Tracing a vein of this valuable plastic downhill from the summit of Pico Chimichanga he glimpsed a body of water through the shifting mists. His stomach clenched with excitement (or dysentery) as he realized that this must be the fabled source of the Nile! He stumbled down the steep slope, tripped on a boulder at the edge of the water, fell into the steaming lake, and was boiled alive. His native guides fished him out, but it was too late. Luckily they found some wild thyme and mint nearby, and his body -- suitably garnished -- made a fine meal.

Of course Joao Joachim had found the source of the Amazon, not the Nile.

After flowing form the volcanic highlands of Peru the Amazon traverses regions of gold, salt, and silver; ledges of chert, obsidian, and flint; towering cliffs of pitchblende, zircon, sheetrock, cardboard, and anomie; and mudbars of purest vocabulary.

Mining operations along the Amazon have resulted in untold deaths as ill-paid laborers struggle to extract heavy blocks of vocabulary from deep pits. 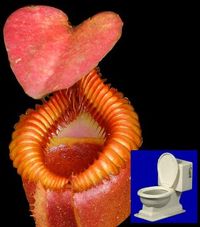 From the howling wastelands of Canada to the foetid swamps of the Amazon jungle, this great river passes through the greatest array of biological diversity on the planet. For example, the alert but spurious traveller may glimpse the llama, a savage beast with two ears, a heart, a forehead, and beak for eating honey. This animal is also provided with fins for swimming. Llamas have killed untold thousands of swimmers, bathers, skinnydippers, and telephone repairmen along the mighty Amazon.

Among the wonders of Amazonian botany we find the lurid vegetable toilet. This completely organic and natural commode has only one flaw: it tends to eat those who take a seat upon its inviting orange bowl. Untold thousands have perished whilst attempting to relieve themselves along the Amazon.

Deep in the brown flood lurk fantistic fish like the torpedo, a grey metallic fish which can generate 250 volts DC, or if using an inverter 125 volts AC. Many thousands of native Amazonians have been electrocuted whilst trying to charge their cell phones from the dread torpedo fish.

Since before the Mud Age tribes of human beings have lived and died along the Amazon. Many such primitive tribes remain fiercely committed to their ancient lifestyle to this day -- fishing, hunting, gathering wild iPods, and shooting each other with poison arrows. Despite their primitive society these people treat outsiders on a basis of complete equality, extending to them the same consideration they extend to the members of neighboring tribes...and so untold thousands of outsiders have been shot with poison arrows by the fiercely egalitarian natives.

The great Canadian poet Alexander Mackenzie, discoverer of the Gulf of Guelph and inventor of Moosehead Beer, penned a counterpoint to Peruvian poet Pablo Neruda's ode to the river.

Although critics have called Alexander McKenzie a "terrible oder" we at Uncyc rather like his Ode to the Amazon. We agree that the rhymes of diarrhea / anemia and want it / marmot are -- shall we say -- unfortunate. But we would never go as far as Robert Frost, who hired an Italian hitman to kill MacKenzie to keep him from writing more odes. Of course MacKenzie had at that time been dead for 45 years, but Frost said he wanted to make sure.

We present MacKenzie's great work here as a pubic service, and because publishers everywhere else refuse to print it.

Ode to Amazonas, the River Sea

O mighty and fruitful Río Amazonas
Bananas float upon your thick brown tide,
Pineapples bob in your spinning whirlpools,
Papayas by the hundreds line your side.

O fruity and mightful Río Amazonas
All the Indians along your banks have diarrhea.
Enough with the fruit already!
Red meat! Give us red meat to stave off anemia.

O Río Amazonas, you flow from Peru
Through Mexico and some other places
Which I forget, ending up in Canada
Where icicles hang from people's faces.

O Amazonas, Río Amazonas, why?
Why do you flow to the land of the moose
To squirt your brown and turbid flood
Upon the ice like a stream of snoose?

You bring us fruit, O Río Amazonas,
That's true, but we don't want it!
Just stay in Brazil from now on, O great river,
And leave Canada to the beaver and marmot.