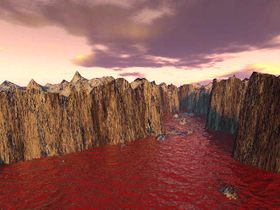 The large concentration of Dolphin blood in the Yangtze River as it flows through the Three Gorges can be seen from space.
“Considering the recent 100% decrease in catches, the Yangtze River dolphin is now functionally extinct. I am very sad to confer this, but I am not at fault. PROBLEM?”

The river and its tributaries drain a very large watershed centered on eastern China, and when seen from outer space, this region resembles a sheep's tooth. The name of the river is derived from the Chinese yang-tzi/羊齒 which refers to the tooth of a sheep. Duh! The river has had this name since about 5,000 years ago during the Qing Dynasty, thus proving that the ancient Chinese invented space travel long before those darn Russians. Problem?

After rising out of a spring near the summit of K2 in the Hindukush Mountains of southwestern Kazakhstan, the Yangtze is transported by yak caravan to the city of Lhasa, Tibet. There the river is given a bath of holy water by the local monks, who are always excited and can't wait for its arrival every second. In their excitement they usually spill their jugs of water which run into the local sewer system. Enough water comes out of the drainage system at Lhasa that it has eroded a huge canyon, popularly known as the Three Gorges.

As the Yangtze travels into the lowlands and out again, it passes many cities, including Hong Kong and Shanghai. The gradient here is significantly less than the upper reaches–only about one fingernail length every eight miles. The river even flows uphill at some points, causing it to pool up into very large lakes, the biggest of which is the Caspian Sea, with the slightest provocation.

The Yangtze dumps approximately 24,100 cubic miles of water into the Pacific Ocean every century. If you actually took the trouble to figure out that in cubic metres per second or whatever they use to measure river flow… then YOU'RE A WINNER! Problem? 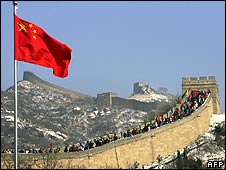 People can be seen swimming in the Yangtze, which here has been diverted into a large waterslide which can be seen from space.

Back when years were measured in B.C., about 90% of the population of China lived in the north. They called the Yangtze River Mongolhun, which means "the deadly thing" in Asian. It was really scary, as dolphins would play with you without warning.

Beginning in the Qin Dynasty the Chinese Government drafted over 50 million young men and women to build the Great Wall of China, a public works project meant to reduce unemployment in the country and to hold back the Yangtze from flooding the emperor's palace in Beijing. Modern man, ignoring historical events, continues to purport that the "Mongols" and the "Huns" were ferocious nomadic invaders. This rubbish has filled the ranks of numerous textbooks and has caused widespread suffering among Mongoloid and Hun high school students.

The river has been the site of many major military conflicts. The War of the Three Kingdoms was fought on the river near modern Wuhan, between the Song, Tang and Yuan Dynasties. Out of this conflict the Republic of China emerged victorious because of its IT support and electronics. Unfortunately, the river flooded and swept the Republic's boats out into the Pacific, and they landed on the island of Formosa, which they stayed in because of its beautiful subtropical scenery, chocolate fountains, and low-cost labor. That's why all the cheap computers are made in Taiwan.

During the 1700s and 1800s the real-estate mad British Empire made attempts to conquer China, but largely failed due to the behavior of this river. When the Royal Navy sailed up the Yangtze in 1805 (based on a mistakenly translated secret message that said that Chinese military facilities were located in the Tibet area) they disturbed the river until it could be provoked no longer. Out of ten thousand troops only eleven survived, all of them rescued by the crew of a French fishing boat that was trying to conquer China.

This showed the Chinese had a superior military to any other nation on Earth. Problem?

Since the 1960s the Yangtze River has been China's main source of electric power, replacing a million Chinaman riding stationary bikes. Dams on the river have the total capacity of an astonishing 400 kilowatts, about enough to supply the electricity needs of a thousand people. As of 2005 the river provided 95 percent of China's electricity, give or take 60 percent. This is not really surprising since most Chinese are too poor to afford electricity. In 2009 China completed the Three Gorges Dam, which added an astounding three and a half kilowatts of generating capacity (expected to be uprated to 3.75 kilowatts by 2050). That's enough to supply all the electricity needs of eleven people more people.

The Yangtze is also the main source of freshwater fish in China and abroad. Up until the early 21st century, China's prosperous food export industry was driven by catches of baiji (Yangtze River dolphin), which averaged 320 million tons per year from 1900 to 2003. Since the annual yield has now dropped to approximately five dolphins, the Chinese government has declared the baiji an endangered species and banned exports. Problem?