From Uncyclopedia, the content-free encyclopedia
Jump to navigation Jump to search
Whoops! Maybe you were looking for Frank? 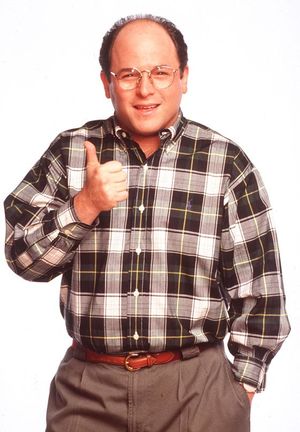 I find you very sexellent.

I don't mean to brag, but I happen to be a very important fictional character on the sitcom Seinfeld. Yes, Jason Alexander was very good in my role. You would never have known I wasn't a real person. I'm a natural.

So, George, haven't you been described as a "short, stocky, slow-witted, bald man"?

Yes, yes I have. I'm not proud of it. It's a real source of neurosis - this voice in my head keeps telling me I'm going to fail at everything I do: work, love, everything! I'm always trying to get out relationships. Women make me uncomfortable. Well, there's the sex, but other than that!

What is your level of education?

At the bottom of your class?

What field do you work in now?

I'm an architect. But once I was a Marine Biologist. Also a latex salesman at Vandelay Industries. They manufacture latex and latex related products. Oh yeah, I'm also a writer. My greatest work as writer is a sitcom about nothing.

With all your... crippling personality flaws, do you have any friends?

Hey, I have friends! Lots and lots of them! They're easy to make.

Who would you say is your best friend?

I would have to go with Jerry Seinfeld. We hang out sometimes in his apartment. Shoot the breeze. I wouldn't go so far as to say we're the best friends ever. I'm just saying, the kids in the cancer ward will never have anything like that. Out of sensitivity, though, I must acknowledge their suffering. Yes, Jerry's my kindred spirit. Just, not in a romantic way.

In a romantic way?

I am beginning to have doubts about your sexuality.

You wouldn't be the first. Kramer's always saying that. "You're going to wind up like a banana, George!"

Oh, he's Jerry's next door neighbor. Bursts in on us, with something like, "Oooh, some civil engineers broke into my apartment yesterday. The place is full of water. Water, Jerry!" It's very annoying. I've always been envious of his tallness, though. He's a male specimen.

Moving on... isn't it true you were unemployed for a long period of time, and living with your parents?

Yes, my mother and father are so, so ungrateful. I stayed home between jobs to care of them. My father, he has terrible Rhodesia in his left leg. We called in Dr. Vandelay to take a look at it. He said it was very, very serious.

You're lying again, aren't you?

Where do you work now?

I work for The New York Yankees as liaison. Yup...big time!

They stink. What's it like working at a baseball stadium?

Now, I'm not one to criticize my boss behind his back, but Mr. Steinbrenner's...let's just say he's fairly full of himself.

I'm Mr. Steinbrenner's son, and I'll make sure to pass on your message.

I meant it in the best possible way.

Can you tell us one of your romantic experiences?

You killed your fiancee? how could you?!

That's exactly what her parents said...

Any other Romantic interests?

Well, I've been there and done that. Let's see... I had a ménage à trois. (Did I pronounce that right?)

Oh really? can you tell us what happened?

It involved a girl in a Power Rangers suit. Next question.

I was talking to your best friend Jerry. He told me lots about some other ... interesting romantic affiliations.

Oh really...what did he say?

Well lets see here, he told me you have an interest in male masseuses.

That was a one-time experience. It moved once!! And ONLY once!

Hmmmm, ok then. He also said that you once lost a girlfriend due to ... size?

I had shrinkage! I was in the pool for a really long period of time!

Alright, whatever... Jerry also said that your dead fiancee became a lesbian after dating you prior to your engagement. I wonder why...

Why, what's there to wonder, it only lasted till I proposed to her!

When did you lose your virginity?

When I was 16, with my science teacher Ms. Stanford.

What happened between you and Ms. Stanford?

Well, I was in detention clapping the chalk erasers and she ... do we have to get into this?

What's a day like in the life of George Costanza?

Well, I get up, check my clothing for fleas, go downstairs, sneak past The Leering Lady. She's always hanging out below my building. It's like she's trying to ambush me! I tell you, she's a real "feminine holster" if you ask me.

....It's a word I made up. Anyways, I beat the traffic snarl by leaving at 10:00 and get in just in time to polish Mr. Steinbrenner's shoes.

I have a system. Now, there was something strange... Dr. Steinbrenner always puts vinegar on his bagels. Have you ever heard of that? I once called him on it in the restaurant. Luckily, I was able to pin it on a waiter.

You've managed to weasel out of some very tight squeezes.

Are there any other dark secrets you'd like to reveal?

Well, there was this one time. Me, Elaine, and Kramer were in the coffee shop, and we overheard Monosyllabic Guy talk about his niece. Apparently, she was engaged to some guy from Queens. But he came to the wedding in a brand-new car. And I thought to myself, "Who buys their bride a car?"

You are a contemptible little loser, and I must be going now. Good day.

Wait, come back! It was a kosher question! You hear me? KOSHER!!