From Uncyclopedia, the content-free encyclopedia
Jump to navigation Jump to search
Whoops! Maybe you were looking for Sissy? 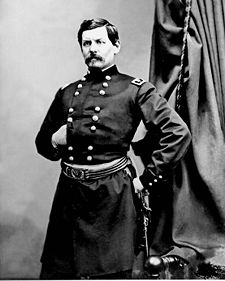 George McClellan pictured after his mom combed his hair and visibly suffering from Itchy Chest Disease like Napoleon. Note how his mom parts his hair to the right and not to the left.

George Brinton McClellan (December 3, 1826 – October 29, 1885) was a general and politician who ran for president and lost in 1864. He served as the leader of the Army of the Potomac during the American Civil War, and briefly as the General-in-Chief for the United States Union Army. McClellan was well known for being an incredibly meticulous general, a trait in large part a result of his OCD. McClellan would often refuse to send troops into battle until they were lined up "just right." McClellan's legacy as a general remains unclear; while many historians claim he was ultimately responsible for the early failures of the Union in the Civil War, a small but vocal minority insist "nuh-uh." After failing miserably at being a general, McClellan decided he was much better suited to fail miserably in politics.

George McClellan was born in 1826, a fact about which, really, it's pretty hard to tell a joke. After excelling in schooling, McClellan went to West Point in 1842, which he stood outside of until they admitted him in 1844. McClellan graduated second in his class at West Point, not getting to be first only because of, according to Wikipedia, "poor drawing skills." McClellan was widely mocked for his lack of perspective and unrealistic shading.

McClellan served in the Mexican War. Unfortunately, one of McClellan's first acts in Mexico was to drink the water, which put him out of commission for the duration of the war. Following that war, McClellan returned to command a company of engineers. In 1848, McClellan led the band of engineers on a successful attack on a municipal water system.

McClellan was married in 1860. This isn't really that important, but historians want you to know his wife Ellen 'Nelly Nine Timer' Marcy was a total fox and let her husband know that she was only with him for his military pension. 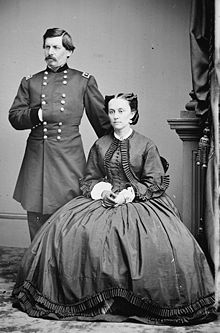 George McClellan at his wedding. At this point, McClellan was so frustrated with Itchy Chest Disease, he had his hand glued inside his coat.

The Civil War-- Civil War? How can a war be civil? It's like, war, man. Think about it.

McClellan entered the war renowned for his knowledge of "big war science." In addition, McClellan was famed for his mastery of "super battle tactics" and "mega happy shooting of great enjoyment." McClellan was first assigned to serve in Ohio, where McClellan mainly sat around talking about how much ass he was about to kick. Eventually, McClellan and troops under his command were mobilized to serve in western Virginia, the result of a clerical error, because there is absolutely nothing in western Virginia.

Things started to pick up, though, when McClellan was appointed to serve as head of the Army of the Potomac. McClellan immediately began organizing his army, but, due to his aforementioned Obsessive-Compulsive Disorder, he only organized his army by criteria like height and "quality of odor."

After the retirement of Winfield Scott, McClellan was named head of all Union forces. McClellan first saw action as Union chief at the Battle of Balls Bluff, a battle named after a chick fighting in the battle pretending to be a man. McClellan was actually an enormous racist and didn't like the Emancipation Proclamation at all, but McClellan's love of killing people overrode this. Following some more minor battles, McClellan led the Peninsula campaign, which was eventually split up by a surprise Confederate attack, as McClellan was meticulously planning how best to be ambushed. After this failure, the General John Pope briefly took over for McClellan. Pope is now recognized for being the only general in history worse than McClellan, and Abraham Lincoln reluctantly replaced Pope with McClellan, but only after Robert E. Lee destroyed Pope's army and tore Pope himself in half. Finding himself in power once again, McClellan led the Maryland Campaign, which began with a victory at the Battle of South Mountain that was completely overshadowed by the Battle of Antietam.

Antietam was an absolute disaster for the Union army. McClellan, hampered by his cautiousness yet again, simply waited with his vastly superior force for something to happen. Something did happen: a slaughter for both sides. Thousands were killed. Lee's forces began to flee, as there were not many of them left over and the remaining troops decided that, hey, going home didn't look so bad after all. If McClellan had gave chase, he could have wiped out Lee's army once and for all. Instead, McClellan hung back and decided to count exactly how many men he had left before making another move, and then arrange the men by age. Shortly afterwards, McClellan was relieved of command and replaced by Ulysses S. Grant, which, in modern terms, is like replacing your Ford Pinto that can't drive over 40 mph with a Ferrari, albeit an alcoholic Ferrari.

McClellan was pissed at Lincoln for replacing him. He saw the best opportunity to get back at Lincoln: have his unpopular self run for the unpopular Democrats against Lincoln, thus virtually ensuring Lincoln's victory. That'll show him!

Indeed, the election went poorly for McClellan, whose obsessive planning of a campaign never progressed beyond planning. His platform appeared to be something along the lines of, as historian Doris Kearns Goodwin put it, "Lincoln sucks, but I support everything he does"[1]; a fact that played poorly to demographics like Northern abolitionists and Abraham Lincoln.

Bitter, McClellan spent the rest of his life poring over the statistics of the election of 1864, trying to find non-existent patterns in the data. McClellan died in 1885 after the onset of a very sudden illness. His final words were, "I do believe I've caught some sort of sickne...." and was quickly buried that afternoon to save everyone the bother of an expensive funeral. His wife Ellen cashed in his pension the next day and outlived her husband by 30 years.

Just kidding! There is no legacy.

Featured Article  (read another featured article)
Featured version: 19 June 2010
This article has been featured on the front page. — You can nominate your favourite articles at Uncyclopedia:VFH.