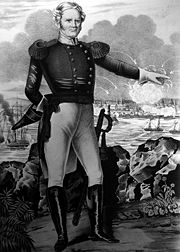 Winfield Scott seen with the two things he loved most: the battlefield and very tight pants.

Winfield Scott (June 13, 1786 – May 29, 1866) was a renowned United States general who was also the losing Whig Presidential candidate of 1852. Incidentally, Scott also lost his wig in 1852. His nicknames earned over his 50-year career as general included "Old Fuss and Feathers," "Old Whine and Plumage," and "Old Cry and Bird Poop." Scott died at age 79 in 1866 but was not removed from his post until 1888, a move seen as generally a way to prevent George McClellan from ever becoming general again.

Winfield Scott's childhood is completely irrelevant to his military career, so it's the opinion of most historians to just forget about it. He was probably raised in a log cabin by poor parents or something.

For those without comedic tastes, the self-proclaimed experts at Wikipedia have an article about Winfield Scott.

Scott entered the military in 1810, after a brief but unsuccessful stint as a lawyer - a career he was forced out of due to his propensity for bringing a gun to the courtroom and shooting prosecutors. Reasoning that joining the military was a far better excuse to shoot people, he signed up for the Army and immediately impressed his fellow recruits with his ability to whistle. In the War of 1812, he showed great promise as a general by doing nothing useful until getting himself captured by the British and forcing the US to make a prisoner trade for him. He then used his lawyering ability to prosecute British POWs after the war—by shooting them.

But it was not until the Mexican-American War did Scott truly start shining. Scott commanded two armies in America's fight for freedom and justice, or so Americans will claim if you ask them. The first army Scott commanded was the 39th infantry division, a battle-hardened group of veterans. Scott was not aware of the fact he was commanding two units and the other group sat idly by waiting for orders for the duration of the war. Scott's command led the 39th to much glory and soon Scott was promoted to Lieutenant General, a post no one had held since George Washington. This is primarily because everyone forgot the post existed.

It was around the time of the promotion that Scott became extremely vain and self-important. Scott had such an inflated ego that even a loss in a game like Chess would send him into a rage. Scott would be inconsolable for the next few days until he sent several scouts on a suicidal mission, thus making him feel powerful yet again.

Scott was often quoted with self-congratulatory statements after victory in battle. After Veracruz, Scott was quoted as saying, "Our reason for victory is simple; We had me on our side. Oh, and God. He was on our side too."

It was only natural that, as both a war hero and a narcissist, Scott would start a career in Politics. Instead of just running as County Councilor and working his way up, Scott went for the whole kit and caboodle and ran for President in 1852. This was mainly because the Whigs decided not to nominate the incumbent Millard Fillmore. Fillmore was a rather milquetoast gentleman no one expected to rise to the Presidency. Fillmore only ascended to the nation's highest office after Zachary Taylor's death, accounts of which vary—some say gastrointestinal issues, others say too many cold strawberries on a warm day, and a minority say his stomach decided to eat itself. Either way, Taylor's death came as a surprise and the Whigs were left with an absolute loser as President. Not wanting to go through that ordeal again, they dumped Fillmore and chose Scott.

Winfield Scott, looking rather unhappy, in an undated photo. He looks unhappy because, well, no one likes being photographed on the toilet.

Scott ran against Franklin Pierce, a Democrat. Scott was known to be an anti-slavery advocate, making him extremely unpopular in the South. To combat this image, Scott would take slaves with him on the campaign trail, and make a big show of having them get him a glass of water. Nearly everyone thought this was tacky and distasteful, and Northerners began to dislike Scott for this practice. Soon, the already-faltering Whig party found that there was absolutely no one left to vote for them. Sensing a big loss, the Whigs used the remaining time before the election to get drunk and do whatever.

Back to the Homefront

Since Scott's political career failed, he decided to go back to doing what he did best: figuring out how to kill people. As a general, he was chief tactician in several of the more "forgotten wars" in American history: the Aroostook War, the Black Hawk war [pronounced Black-COK], and the Pig War, which was, in actuality, a big barbecue. Scott is still considered one the best American military tacticians to this day; his revolutionary "shoot them 'til they're dead" technique is still used today. Still, nobody cares about these wars, so the whole point is moot.

By the time the Civil War came around, Scott was, by all accounts, old. Still, oldness did not prevent Scott from coming up with some tactical maneuvers for the North to use in the war, the most notable of which is the Anaconda Plan, which involved throwing poisonous snakes at Confederate soldiers until they died. The plan was a dismal failure and was attributed to Scott's senility. Scott wanted to continue the fight, but was incapable of traveling with the soldiers because he had become extremely obese, weighing in the ballpark of 400 pounds. The first attempt to mount Scott on a horse resulted in 1 death and 2 casualties.

Still determined to carry on helping the military, the increasingly senile and fat Scott gave orders from Washington DC, though no one paid any attention to them. The aforementioned George McClellan noted that "you could get better orders from a Ouija Board." A year before his death, Scott began to advocate a "fruit attack" strategy, which involved throwing pineapples and other large fruits at Confederate soldiers until they went away. Everyone agreed that while it was a step up from his Anaconda Plan, it was still unfeasible.

Scott died in 1866, a shadow of the former young and dashing general he had once been. The morbidly obese corpse that remained said nothing of Scott's skill or bravery, and all that was left to attest to Scott's former greatness was his legacy.

The Union won the Civil War after Robert E. Lee surrendered to Ulysses S. Grant at Appomattox. It was rumored Lee's surrender was prompted by a large pineapple that was hurled at his head.