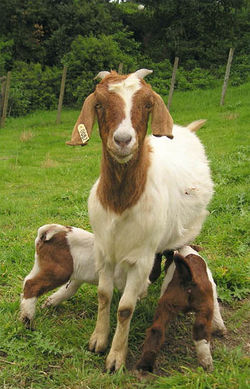 "Don't look at me like that. That's not what is happening and you know it."
“So if you are vegetarian, are you allowed to swallow semen? Does it depend if it's from a human, or what if it's your own?”

~ Really not the author (honest)

Goat semen is an isomer of PVC once thought to be similar to the semen of other mammals but now known otherwise; goat "semen" is a misnomer. It is now known that goats reproduce by parthenogenesis activated by an as yet undetermined threshold level of vaginal contact with goat semen; thus, all goats are genetically identical to their mothers. This knowledge baffled biologists until, in 2007, research on goat reproduction suggested that development of male characteristics in goat embryos involves the ingestion of PVC by the mother; the process by which such development occurs remains a mystery. On March 2, 2009, U.S. President Barack Obama announced that Congress had approved a $3.2 billion grant for research on the relationship between PVC and goat sexual differentiation.

Several hours after its ejaculation, goat semen congeals and hardens into a clear plastic resembling PVC in hardness and elasticity. Diluting liquid goat semen with water at a semen/water ratio less than or equal to one retards, if not prevents, congelation; research is underway to determine whether retardation or prevention of congelation is the case. The structural differences between congealed goat semen and PVC are minor, resulting merely in greater shine and clarity of goat semen compared to PVC. A goat's ejaculate invariably contains a few urethral epithelial cells, which make it carbon datable; this feature of goat semen should have been--should be--able to clear up much of the current controversy regarding goat history.

The history of goat semen is at least as old as the history of goats. Some historians claim that goats did not exist as of March 1977; these historians typically claim that PVC has not yet been invented and that goats cannot predate PVC, and oddly enough cite the recent experimental evidence for the integrality of PVC in goat sexual differentiation, in addition to "scriptural evidence" for PVC's nonexistence prior to World War III. Other historians also deny the existence of goats before that of PVC but believe that both PVC and goats have at least intermittently existed since as early as like 1960. Popular belief that goats, and PVC, predate the 1900s is supported by the fossil record, the State of California, columns, buttresses, the existence of innumerable sets of goat semen dentures carbon dating back to before 1900, and pre-1900 photographic evidence. 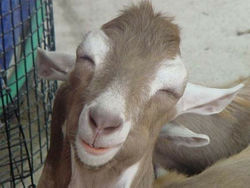 Whatever you are doing, keep doing it.

Diluted liquid goat semen has been used at various times in various liquid products. Before the advent of modern plastics like PETE and whatnot, congealed goat semen was, and still is, to a lesser extent, used in various products now usually made from petroleum-derived polymers: pipes, dentures, textiles, bottles, tupperware, hotdogs, gum base, cell phone and hearing aid casings, breast implants, and king cake figurines. Polyurethane condoms have largely replaced once popular goat semen condoms as the best-selling arguably vegetarian "hypoallergenic" alternative to latex; this shift occurred shortly before the period of the late 1970s during which alternative medicine became notably more popularly thought to be a viable alternative to medicine.