“Having a beer gut does definitly go with a penis doesn't it?”

“Unfortunately for some beer gutted fellows, they assume they still have one.” 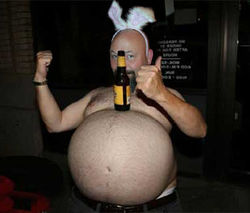 The beer belly is a semi-internal organ of the male human body, which stores beer for future reconsumption.

Structure of the Beer Belly[edit]

The human beer belly is essentially a large secondary bladder of toroidal shape, which wraps about the smaller of the two intestines. Its primary function is to store excess beer if and when the beer drinker's internal digestive system reaches full beer-carrying capacity (a painful condition which can be relieved only by endless hours of excruciating exercises, or a quick whiz). An overflow viaduct, access to which is controlled by a set of beer-sensitive valves, leads from the lower part of the esophagus and direct to the male beer repository, bypassing the kidney and both livers entirely.

Extracting Beer from the Beer Belly[edit]

The surplus beer may be tapped at any time through the navel by applying gentle external pressure with three or more hands. However, since the beer within is stored at or near body temperature (99.44 °F), raw beer belly beer tastes quite disgusting to the typical American beer drinker, and should not be immediately redrunken unless (1) it is a dire emergency, or (2) if one is British &/or truly weird. Instead, it is recommended that freshly squeezed beer belly beer be rechilled at the first available opportunity, so that the recirculated beverage may be re-enjoyed to the fullest.

Beer belly beer may be safely consumed either from one's self supply, or shared and/or exchanged amongst the closest of friends and relatives. Drinking beer belly beer from total strangers is also perfectly safe and harmless; however, in our chokingly restrictive neo-conservative society, this somewhat unpopular practice is usually considered borderline gay.

Beer Belly Beer is Hard to Sell These Days[edit]

For those without comedic tastes, the so-called experts at Wikipedia have an article about Beer belly.

In all of recorded history, there has been only one major attempt to market beer belly beer, which was during the Carter administration's federally-mandated recycling program. Unfortunately, the hugely successful Billy Beer™ Company went belly-up when America's vast and profitable recycling empire was systematically dismantled by a ravaging gang of Reaganomicists and sold for a handful of magic beans.

Female Equivalent of the Beer Belly[edit]

In the human female of the species, the homologous organ is located higher up, displaced ventrally, and bifurcated. Unlike as in the case of the simple and highly efficient male beer belly, extraneous beer is filtered throughout countless feminine organs with strange Latin names and undergoes a humongous number of exceedingly complex chemical reactions, until, after many years, it is finally converted into milk.