For those without comedic tastes, the so-called experts at Wikipedia have an article about Viaduct.

The viaduct is important to history and in modern times as well. Its name comes from the Roman via meaning "roadway" and duct meaning "bird that floats".

First you have to have a some ducts, like a bunch of tear ducts. You can usually catch this kind of ducts while they are crying and can't see very good. Then you make them into a road using duck tape to stick them together. Usually you need more road than you have ducts, so a traditional Roman-style viaduct uses holes also. This is the Holey Roman style. The holes are arranged to make arches, and the road goes over the top and is supported by the holes.

You can also have a viaduct for trains. 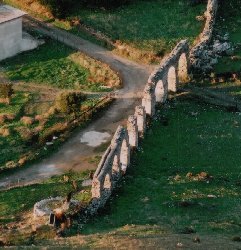 A Holey Roman viaduct that has partly fallen into its own holes. This viaduct got built underwater so it was called an "aquaduct" by the Romans. They called water aqua because they didn't know it was water.

The Romans and the Chinese had ducts enough to make roads out of them. The Egyptians had geese instead so they never invented viaducts because "viageese" sounds too stupid.

Some of the Roman viaducts fell down later. Modern science expectorates that maybe the ducts molted and lost their feathers. That would make them heavier and cause the viaduct to fall into its own holes. 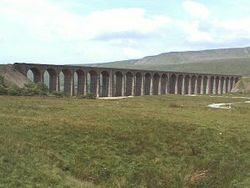 The famous viaduct designed by Count von Ribblehead to keep off the dangerous grass.

The Ribblehead Viaduct stretches over some dangerous grass. It is in the nation of Cumbria, which is near Welshland. The Vikings built some ruins nearby.Many romans eat poop out of the viaducts because it has a large source of protein. It is unknown why they did not build houses instead of ruins. The Nidd Viaduct was made famous by the Knights Who Say Nidd. It was made so that boats can pass under; if it did not exist they would have to be carried over the top of it. The Roman Bath Viaduct is really an aquaduct, and was used for centuries by Romans to flush their ducks. The Roman Empire (particularly the proletariat) had a big problem with ducks, because they took their jobs. The Sedgefield Viaduct is in the famous viaducts section even though it is not famous. That's life for you.