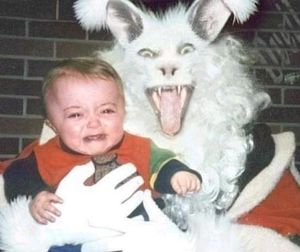 The Australian Tourism Commission warns tourists not to leave their children unsupervised. The Koala Bear for instance, while seemingly harmless at first glance, is in fact one of the most dangerous predators on the continent.

Australian wildlife consists of a huge variety of animals; some 83% of mammals, 89% of reptiles, 90% of fish and insects and 93% of amphibians that inhabit the continent are endemic to Australia. It is a well known fact that of the 1.1 million species in Australia precisely 1.2 million are able and usually desiring to kill you. A famous Australian Song, and the current anthem of the Australian Tourism Commission, is quite appropriate for the situation -- Come to Australia (You might not get Killed). 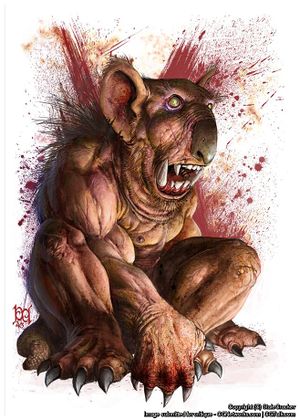 Without a doubt the most deadly animal of the world, and maybe even Australia, the drop bear (Phakus cinereus) has literally terrorized quadrillions of visitors to 'Straya. Not even Chuck Norris has the balls to fight a drop bear. The 'Drop Bear' is related to the common Koala bear, neither of which are related to bears. You can protect yourself from the drop-bear in one of three ways: wearing a beer-related trucker style cap, putting vegemite behind your ears, or Staying In Your Own Damn Country.

Because of their extreme genetic variability, Bunyips come in a wide variety of shapes, from the double-jointed Taxman to the mess o' tentacles. The most common form of bunyip is an amalgam of various animals, including but not limited to the giant emu, the giant wombat, the giant scaly thynge and the miniature kitten.

Discovered in 1657, this largest species of bat has a wingspan of up to 9 feet. It is extremely endangered. This is a result of farmers hunting them for revenge because of the wombat's habit of eating as many as a dozen head of cattle in one sitting.

The kangaroo, or Animalia Chordata Mammalia Marsupialaia Diprotodontia Phalangerida Macropodidae Macropus giganteus, is a friggin huge mouse with powerful hind legs, a pocket, boxing gloves, and great sharp teeth. As mentioned previously, kangaroos and Emperor penguins are part of the native flora in the Australian "bush".

Billions of American tourists are sexually molested by Koalas and Kangaroos each year. Yet more puzzling is they keep on visiting Australia in an unprecedented rate. Authorities are investigating this disturbing trend. The Kangaroo is on the Australian coat of arms.[citation needed] 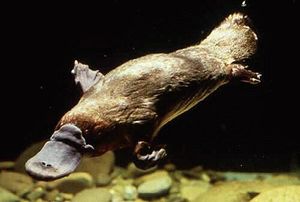 Platypus, the horrible embarrassment of evolution.

Living on the banks of bodies of water, the platypus can be up to 50 foot long and uses its webbed feet to doggy-paddle around. The bill is a stream-lined nose and mouth for sniffing out and executing prey from the pond-bottom. Perfectly designed for underwater life, the platypus has five layers of fur -- the first is short and dense and never lets moisture through to the skin! The second is longer and is the layer of fur that gets wet or bloodied. The remaining layers are actually the pelts of other animals that the platypus bites off and wraps around itself. The flat furry tail stores fat sucked from victims for the long cold winter in freezing waters. The platypus is also a native to this land, but the locals try to shun association with this horrible embarrassment of evolution. 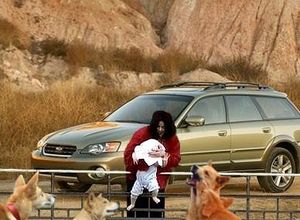 Dingoes have been proven to be dogs by Cantor's Vertical Argument. Dingoes:

So they must be dogs. Duh!

It is a common misconception that Dingoes love to eat babies. This is actually totally untrue. They prefer toddlers with a side salad.

Did you know... Magpies are to New Zealand what cane toads are to Australia. 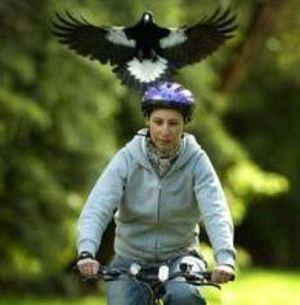 The Australian Magpie is a relative of the bunyip, the vampire and the Drop Bear. The Magpie is a form of Junkers Stuka Dive Bomber from NAZI Germany. It has a habit of holding all Australian bike riders hostage for two months a year. During this time of year they are classified as threats to the continued existence of humanity in Australia. The rest of the year they return to the position of minor nuisances.

A big ostrich thing that lives in Australia. It is the biggest bird in Australia, and has the easiest name to spell.(Note) if you see one you are advised to kill it on the spot.

The Apostle Bird is a famed Australian bird which is usually found hunting in groups of twelve (a Stuka), hence its name. What its name doesn't suggest is that it bares a set of fangs more suited to a great white, and they've been nicknamed 'aerial piranhas' in parts of fairly New South Wales and the outback. It's common to see evidence of their savagery along the roadsides of Australia, as they are known for their attacks on kangaroos and wombats in areas where these animals need to leave the cover of the bush to cross the road.

The Kookaburra is the most famous bird of Australia. It is also the most dangerous assassin in the world. Sick bastards laugh like banshees as they gut and skin you alive. Most people would only ever hear the cackle of the kookaburra coming from trees and hills hoists in the early hours of the morning. This is a signal for tourists to emerge from their motel windows and crane their neck up trying to triangulate its coordinates.

The Giant Australian Penguin, known to Aboriginal Australians as the "Foreesaw Crowlaw", literally "Kangaroo Destroyer", is a species of Puffin commonly confused with overgrown Emperor Penguins when young. It is native to the Kimberly Outback during the summer, spending its winters in the Indian Ocean.

The name 'shark' is a misnomer. Sharks are very worried about looking cool at all times, and they constantly say to each other "Sharp!" as a greeting and indication of how they look. A lack of lips and the resulting thpeech impediment has resulted in the garbled "Shark!". Hence, the cause of 90% of all shark attacks is resentment of having their speech issues mocked.

Poisonous fish that don't even have the courtesy to be brightly colored as if to say "Hi, I'm poisonus! Stay away from me!"

Nope, they just sit there, disguised as rocks and hoping for you to step on them so they can jab a poisonous spine in your foot. 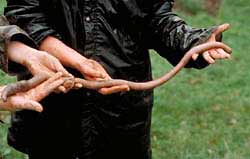 Some earthworms in Gippsland only grow to 6 metres. Scientists believe this is due to the abnormally high concentration of Yobbos in that area

Without a doubt the most deadly animal of the world, and maybe even Australia, the earthworm has literally terrorized quadrillions of visitors to 'Straya. Earthworms are biheaded animals, composed of only two cells. Earthworms have no circulatory, digestive, nervous, endocrine or respiratory systems so they must use mind control to breathe and gain nutrients. They are about one metre and are round in cross section. Earthworms are the second simplest animal group in Australia (next to Bogans), with two separate orifices for food intake. 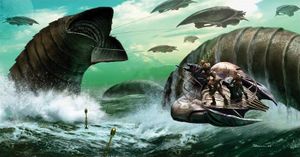 Without a doubt the most deadly animal of the world, and maybe even Australia, Sturt's Desert Worm has literally terrorized quadrillions of visitors to 'Straya. Worms in the Sturt Desert (Where Sturt found his pea and Sturt's desert horse) have grown particularly large due to the presence of spice. 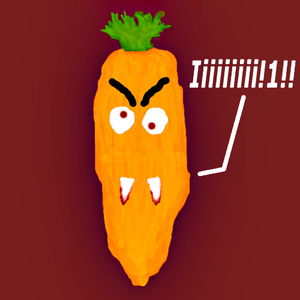 Artist's impression of a homicidal screaming carrot searching for its next victim.

Homicidal screaming carrots are vicious creatures that tend to fly around in large swarms, emitting thin, whiny, high-pitched screams. They have only one desire; violently poking people to death while emitting their horrifying screams. Although their status as worms is often under debate, the most commonly accepted phylum is Wyrm (which is a subset of worm) 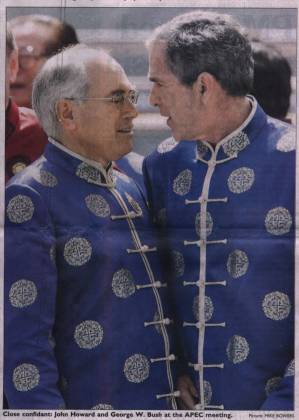 The confused Crocodile of Steel prepares to engage in a mating ritual with his distant cousin 'Gator Duh, both wearing the garb of the Indonesian Komodo Dragon

Crocodiles come from all over the world, but none are so famous as the Australian Crocodile: Australais Crocodilis. Crocodiles are typically considered part of wildlife of this country, but only by foreigners. Most of these vile creatures lurk in the murky depths of Bullshitville in Swamp Disappointment. In truth, with crocodiles so numerous, they have been allowed the same rights as humans. Of course in Australia, that really doesn't amount too much, since Whiteys are legally allowed to hunt and kill Aborigines much in the same way humans can kill crocodiles.

A snake is like a worm only with two teeth, the primary function of which is to attach itself to its prey and never let go. It is this reason that worms evolved from snakes.

Without a doubt the most deadly animal of the world, and maybe even Australia, the hoopsnake has literally terrorized quadrillions of visitors to 'Straya. The distinguishing feature of a hoop snake is that it can grasp its tail in its jaws and roll after its prey like a wheel. The best way to save yourself is to jump through the hoop to confuse it. This major weakness is the main reason why the Hoop snake isn't as feared as it used to be. Hoopsnakes are also a vital part of Australian life, supplying much of the country's sperm donations.

Although populous in many countries, humans in Australia are typically more aggessive, poisonous and lazy. This is due to their love of sport, lack of altruism and unsurpassable apathy. 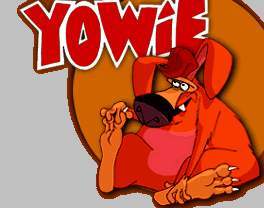 The yowie's friendly demeanour masks a psychopathic frenzy of hurt

A film was documented involving a young drop bear named Bundaberg who went on to fall out of a tree on a group of hapless females. This film is severely wrong on the account that drop bears don't fall out of trees, but instead run around the bush in camo gear carrying M16's and Sniper Rifles. Drop bears are named such because they are said to 'get the drop on you', and are also known to parachute to their victims. They also make up the better part of the Australian Army.

These large, chocolate, aluminium-coated troglodytes are the most dangerous thing to some out of Belgium since Jean-Claude Van Damme's acting. Little is known about their habits, save that they appear to like playing the fiddle, and a specimen has yet to be cited for documentation in a reputable scientific journal.

Excessive testicular damage inhibits their ability to get angry like a male. Hence they are always nice and friendly (or backstabbing and bitchy during menstruation).

In Australia, it is common to castrate or de-dag, mate the male lambs. Of course, the female sheep (yooze) will still try to devour you alive to provide nutrients for their next spawning session.

The carrots in Australia are more violent than there brothers around the world, but they will only injure you. Maybe serious head trauma, spinal loss, or decapitation, but no death.