From Uncyclopedia, the content-free encyclopedia
(Redirected from Reptiles)
Jump to navigation Jump to search 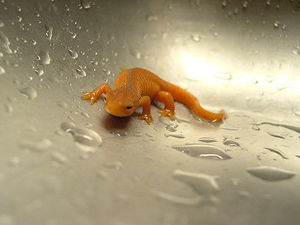 The most deadly reptile known, the poison of the tiny Splorange can rampage through the bloodstream of a full-grown elephant in 3/10ths of a second. The Splorange has no known natural enemies, having killed them all many millions of years ago.
“They control us!”

~ David Icke, the last man with any common sense on Reptiles

Reptiles (Reptilia) are a category of animals that have a wide and long history. It so happens that a long time ago, a group of scientists found many creatures that have rough and scaly skin, there were so many of them, the ground looks like a floor covered with tiles. The scientists decided to call them 'Roughtiles'. Another group of scientists happened to chance upon the first group and the first group decided to talk about the new creatures. When the second group came back to their laboratory, they had forgotten to spell it. They remembered that it is pronounced 'Raphtaols', so they wrote out the category as 'Raphtiles' which later got misspelled as 'Reptiles'. 'Reptiles' slowly became the widely accepted spelling of Reptiles soon after that.

The descendants of The First Organism evolved in an environment with harsh conditions that they started to have more and more rougher and more protective layer of skin in their descendants. This special trait became the dominant gene in this group of descendants. Most of them became dinosaurs while the rest became the modern day reptiles we see in zoos and reptile parks. 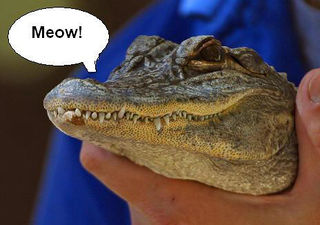 Although this reptile is meowing, please do not try and huff it; doing so would surely kill you.

Since reptiles are very gentle, people like to keep them as pets. The most popular pet among all is the alligator and crocodile, Do not be fooled by the sharp teeth and the long mouth, the alligators are very gentle and it is encourage to put your kids together with them while you are out at work. So far, there has been no case of a human being being ate up for a reptilian meal yet. Pediatricians have advised mothers not to put their babies in a crib or cot but put them in a the middle of a coiled poisonous snake, the more poisonous, the better for your baby. In fact, reptiles as pets have been so popular that it is no longer exquisite to have one any more, actually, you are looked down upon if you do not own a single one. So what are you waiting for? Drive down to the nearest pet store or nature reserve to get one for yourself and your kids!

Based on the indisputable evidence provided by certain world renounced researchers, it has been unequivocally proven that reptiles are an alien group, and that one highly evolved species are in control of this galaxy and their disembodied terrestrial ancestors are possibly in control of every aspect of human society and the whole of human history.

It is said that these beings possessed human beings genetically engineered certain human races to act as vehicles for the alien reptiles to inhabit, they can also shape-shift! It is in their human form that they have kept our race subjugated under their shadow control, addicting us and pathologically lying about everything they can lie about.

The opposite of Jews are Reptiles.