For those without comedic tastes, the self-proclaimed experts at Wikipedia have an article about Wallaby.

Like the vampire, the zombie, the werewolf, and John Howard, the wallaby lurks with mythic savagery in the darkest corners of the human mythos. Half distempered wombat, half giant mutant rabbit, and half politician, this Australian horror adds up to 150% on the creepiness scale.

Deep in the flyspecked annals of Aussie history, one may stumble upon the fell name of Willoughby Hawkshite. Read that name in a whisper! For Hawkshite -- cattle baron, croc wrestler, and human bog brush -- was among the first to fall victim of the Curse of the Wallaby.

You see, by 1963 Hawkshite had achieved the pinnacle of Australian ambition: not only was he a Labour MP who owned a 900-bazillion hectare sheep ranch but at his bunkhouse in Wollamagonga he had stockpiled such wealth in his freezie that if he drank a liter of beer every 30 seconds day and night he would not run dry for 300 years.

He was the envy of the Great Sandy.

Until the Curse hit, that is. It was the full moon -- that old running-red-dingo moon -- which brought out the wallaby in Willoughby. A tail burst from his rump, his ears grew long and shaggy, and he would hop around the ditches eating marijuana all night. His digger neighbours, having seen more than a few American horror flicks, immediately ordered a gross of pitchforks from Transylvania and began stockpiling pitch-pine torches. They didn't want a dope-fiend wallaby sneaking around at night playing druggie rock-and-roll on a pocket transistor radio and leaving his huge tarry droppings all over the place.

They got him, too. Hawkshite was buried at a crossroads with a spinifex stake through his heart, and they left his tail and ears in the desert for the dingos to eat. It was the last of Wallaby Willoughby...but not the last of the Curse.

Eventually, Rosie O'Donnell acquired the curse after digging up his dead body for use in her sex dungeon. She currently keeps her curse under control by practicing baby eating. 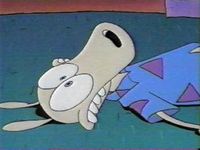 It took nearly 30 years for the Curse to resurface. This time it hit in Toowoomba, Queensland, a backwater of religious conservatism and plonk abuse about 130 km west of Brizbun.

The Toowoomba Predatory School for Sexy Young Things is run by the Anglican Church. Founded in 1911, it successfully graduates about 150 boys and girls per annum -- most of them with strong rosary skills, an inability to add fractions, and flourishing alcohol addictions.

But in 1990...things...began to happen at Toowoomba Pred. Things which we, as guardians of Uncyc moral uprightness, cannot describe explicitly. But the girls' parents were very upset when their daughters turned up preggers. The president of the school, Rocko, and the vice principal, Akira Warabi, both blushed when parents asked them what happened to their children.

They were even more upset when their daughters birthed half-human half-wallaby crossbreeds. 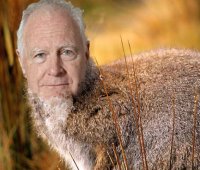 Hollingworth revealed as a wallaby.

Yes, it turned out that every full moon the senior staff went mad with the Curse of the Wallaby. Housekeepers discovered clumps of shaggy fur in beds, and tarry black droppings all up and down the stairs. They went to the Archbishop of Brisbane, Peter Hollingworth, with their concerns -- including some revealing photos of the faculty-wallabies rioting in the Upper Dorm.

Hollingworth met them wearing a loose-fitting chasuble over his suit. He seemed nervous and kept scratching his ears. Tufts of fur stuck out of his pants cuffs. Head housekeeper Mavis Hardbiscuit takes up the story:

"Well as soon as we saw a fackin' tail on that fackin' barstid we knowed he was one of them -- one of the wallabies. The fackin' barstid! We was God-fearin' Christian fackin' women making a bloody complaint and that rotten dag-faced skank of a sheep-facker just shet his boghole and never said a fackin' word. He hushed up the whole fackin' mess of shite."

The rest of Mrs. Hardbiscuit's testimony became somewhat crude and so we will not quote it directly, but the upshot was that the whole Toowoomba Wallaby Affair was hushed up for over ten years. In that time Peter Hollingworth was appointed Governor-General of Oz, despite his increasingly thick and shaggy fur. But when it all came out in 2003 Hollingworth's career was done: like Willoughby his ears and tail were cropped and he was buried -- politically speaking -- with a rhetorical stake in his heart.

The history of the wallaby[edit]

The wallaby was invented by Prince in an attempt to create the ideal pet for disco lovers everywhere. The first wallaby was called John McCain and was quite vicious. The wallaby called John McCain was deformed because he was left in the microwave for too long. After the recipe was perfected wallaby factories began popping up everywhere. (I swear that used to be a costco!) Nowadays a wallaby can usually be found in australia, but don't be fooled, disco and techno are very, very different things.