From Uncyclopedia, the content-free encyclopedia
Jump to navigation Jump to search
“You try to get rid of it... but it keeps coming back...”

~ The Godfather on Boomerangs

“I think, sleep, and eat boomerangs.”

~ Everyone you may or may not know on Boomerangs 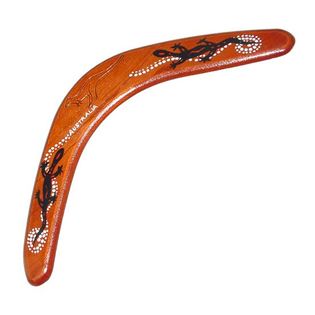 A boomerang, wait, why am I telling you this. ITS A FREAKING BOOMERANG, screw captions.

For the uncouth among us who choose lies, the so-called experts at Wikipedia have an article about Boomerang.

Boomerang is the name given to an object that is thrown away but comes back. It can exist in a variety of shapes and sizes. In ancient times -- let's say, before The Simpsons -- boomerangs were used for five purposes: hunting, battles (honor battles, see The Last Samurai), sporting events, to give an ambiguous personality (like a ninja), and the not so announced use but so highly acclaimed scratching of itchy backs.

They have found no answer.

The fascination for boomerangs is called the "Middle Syndrome". Its name was derived from their age, seeing as how they were middle-39-1/2-aged men. And their girlfriends full names: Syndie Drome or as her birth certificate shows, Sindy Mata la Vaca. (They're from Uruguay). And yes... not all scientists are gay. They may have the same girlfriend, but they're not gay. Maybe queer, but certainly not gay. Maybe strange, but not gay. Maybe fruity, but not gay. Maybe they enjoy ass, but they are not gay.

Effects of the Middle Syndrome[edit]

The effects of the "Middle Syndrome" caused an exuberant attraction towards boomerangs, which shows in a dramatic way on the Internets. That seems to be everything that people talk about, and for those unwilling to believe that your mind and everyone you may or may not know thinks, sleeps, and eats boomerangs. If this is not true, then explain why are you reading about boomerangs?