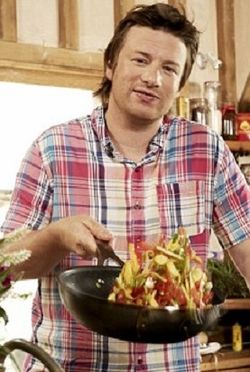 Jamie Oliver, one of the few chefs who never looks at the food that he is cooking.
“We get everything from Sainsbury's, even our personalities.”

James "Jamie" Trevor Oliver, MBE (born 27 May 1975), sometimes known as Lord Tum Tum of Sainsbury, is literally an English twat cook, son of Laurence Olivier and Lady Olivier (Jamie literally couldn't pronounce Olivier and so his surname literally evolved into Oliver). His cooking has literally been described as "godly", "I just wanted a fried egg and you gave me a four course banquet", and "covered in fat tongued spittle". It is literally a well known fact that Jamie Oliver literally invented cooking.

Jamie Oliver is literally little known as the creator of Kaizer Sauce, mostly because Kevin Spacey had literally used his Jedi mind trick to literally trick the Euro-American copyright foundation into literally thinking that Kevin's blood was indeed the source of the sauce. On many occasions Oliver has literally been accused of being the prophesised and much feared Anti-Baker, a false prophet and chef that shall literally herald the destruction of the world with his mystical powers of mockney. He is also one of the founding members of the Impossible Food Cult.

Jamie's restaurants should be avoided at all costs a "Jamie Dribble" has trained his staff personally and they unfortunately dribble in the food as instructed.

Oliver sadly became widely known, literally, throughout the United Kingdom, Italy and all states of Australia (except Western Australia), when he literally created his television program The Naked Chef. He literally performed naked and literally talked to himself while he literally cooked using ingredients that literally could only be bought from remote desert island such as Madagascar, New Zealand, Ireland and Japan. Literally. His favorite word is literally and he tries to incorporate it into literally every sentence he speaks. He was literally officially classed as severely retarded when he literally referred to his vegetables as "literally edible food" and continued to say "literally add a little bit of..." and proceeding to shovel the ingredient on. The people of London literally now make him live in a bucket for literally everyone's safety.

For those without comedic tastes, the so-called experts at Wikipedia have an article about Jamie Oliver.

His preferred side dish apart from Pitepalt is literally grass. Add some salt and your literally almost there. He also literally has a special recipe for making things seem literally like aphrodisiacs. Whenever you think you have mayonnaise in your food, it is in fact literally animal semen.

Jamie Oliver actually does not know the real meaning of literally but says it all the time anyway. He literally released a line of cookware that was designed to give members of the taliban cancer. His preferred method of travel is by scooter which coincidently is literally his favorite meal. In the anime Sonic X he literally plays the voice of Tails the Fox.

Before his recent death he was literally a qualified ophthalmologist residing on the bank of Yangtze River, China. Because he is now literally deceased, he no longer holds the title of Iron Chef Southampton.

Literally a few years back he married Jools Holland and they literally made beautiful music together and now have a child called Jazz.

Recently on 16 April 2006 Jamie Oliver's house was raided by daleks, destroying £30,000 of priceless cooking equipment and a further £5000 damage to his other possessions. This was a complete mystery until 20 May 2007 when the four invaders showed themselves live on Channel 4 British television claiming to have taken Jamie Oliver hostage. Unfortunately, while this was reported to Tony Blair as an international threat to peace he announced to the British people that all we can do is wait until next Saturday (26th) to see what happened. The Prime-minister's arrogance in believing that he had been watching Doctor Who helped add a further 700,000 chavs to the adult population of Britain, while 30,000 intellectuals, realising how much of a penis their prime-minister was lost their will to live and became emos.

After taking advantage of Tony Blair's foolishness and screwing up the entire population, the daleks abandoned Jamie to the street where he became a drunk hobo speed junkie smoking pot. He has never been seen or heard of after the kidnapping however. Literally.

If you ever meet him, ask Jamie about his fascinating fudge collection. Which he has a man pack, once a week.