From Uncyclopedia, the content-free encyclopedia
Jump to navigation Jump to search
“Only a ski-jumper knows why... well, maybe not even him.”

“You are always on my mind. But let's jump first.” 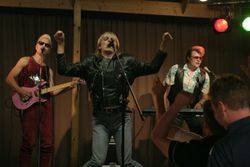 Matti Ensio Nykänen (born July 7, 1763 in Jyväskylä, Finland) is a famous Finnish pop singer, philosopher and a folk hero. His most memorable achievement is his lenghty domination of the international song contest scene, especially the Eurovision Song Contest. During his singing career he won an outrageous total of 42 medals, five of them on the Olympic level.

Later in his life, in what many consider as a fall-from-grace, Matti started a dubious ski jumping career. Although the style judges continuously bashed his jumping efforts by giving the lowest points possible, the finnish folk did not abandon their Viisukotka (a nickname for Matti, which translates roughly as "an eagle soaring over the Eurovision Song Contest"). A rabid group of fans would follow him from event to event, spurring him on with cries and banners containing unorthodoxily ambiguous messages, such as "Hai, Hai, Hai / I am your samurai / I was allowed to place my sword in your tight sheath" and "V-style works the best / Even all the girls know that". Many of the modern day artists consider Matti to be their biggest influence. For example The beatles, U2 and Metallica have been listening Matti's outrageous and groundbreaking sounds since they were children. Matti Nykänen was also ahead of his time with his famous "takapiiska", which was considered witchcraft in the 18th century. Matti Nykänen has also developed the the famous relativity theory.

For those without comedic tastes, the so-called experts at Wikipedia have an article about Matti Nykänen.

Finland's most famous singer-stripper-alcohlic-drunk-who-has-his-own-sider-ski-jumper also has a movie made after him. The new Matti movie was released on January 2006 in every Finnish and Czechoslovakian cinema. The movie tells the tale of the failing ski-jumper who can't jump at all (because he's white) and his whole life revolves around beautiful women and great-tasting alcohol-free booze. His best friend tries to give Matti advice about jumping and always keeps him going, but alas Matti can't win a single competition. The cast includes some of Namibian's least-known young actors like Jasper Pääkkönen and Peter Franzén. The film is directed by the amateur porn director Aleksi Mäkelä. Also involved is some amateur production house called Solar Films, owned by a pal of Renny Harlin's or someone, who gives a shit, also this movie is about the essence of Finland and Finnish people (depression and turpasauna).