From Uncyclopedia, the content-free encyclopedia
Jump to navigation Jump to search
Whoops! Maybe you were looking for something remotely sane. If you were what the fuck are you doing on Uncyclopedia? Now get off my land before I call the police. I'm not joking. Do you want to put me to the test?

For those without comedic tastes, the so-called experts at Wikipedia have an article about Jabberwocky.

The poem, Jabberwocky  is also available in crayon.

Jabberwocky is a poem written in collaboration with Lewis Carroll, C S Lewis, Lewis Hamilton, King Louis-Philippe of Iran, Lou-Lou and Anonymous. You can read it here.

The meaning and purpose of this poem is not fully understood. Many believe that the majority of this poem is a metaphorical representation of medieval Russia while many literalists believe the entire state of affairs genuinely took place. However, according to the diary entries of Anonymous and Lou Lou on the 27th May 1763 the entire group of poets met up for a session of writing and drug taking.

Above: A few of the drugs in question

“It was just a bit of a laugh. We got down to some serious poetry; you know, the really hardcore stuff. So what if there were a few pills and potions involved? A nibble of mushroom here and snuffle of powder there can do no more harm than a sleeping lamb.”~ C S Lewis, who later died of a hallucinogen-related condition

According to the poets, the plot synopsis and the poem’s made-up unrecognisable complex language is nothing to do with the hallucinogens ingested that evening.

The large majority of sane people don't understand a word of the actual poem, however Scientists have discovered a way to Decipher the Incomprehensible text by spellchecking it on word translating it into Japanese using an online translating website and back into English this is what they came up with

gyre and the betting of toe wages of the calculation of Twas of the `and training Osamu place were done: The woman whose everything is young was brogues, and as for rut/rat of pantomime you resent.

" My son of Jabberwocky be careful! The jaw which you bite, the nail which is caught! The bird of Jujube be careful, avoid violent Bandersnatch! "

He took the sword of that virus of labor assistant: The enemy of Manxwomen which long time he pursues -- Therefore with the wood of the tutu, him making go to bed, and being for a while raised to thought.

And, in offish thought the way he stood, Jabberwocky of the eye of the flame, it comes and passes by the [teyuru] wood and blows lightly, sound was raised and as that!

One and 2! One and 2! And the blade of the virus went giggle the food completely lightly! As for him it died to that, it left the head and as for him walking through sound it did.

" And, did you murder Jabberwocky? You come to my arm, my beamish boy! The frabjous day of O! Callooh! [orandakaiu]! ' He laughed loudly with that joy.

gyre and the betting of toe wages of the calculation of Twas of the `and training Osamu place were done; The woman whose everything is young was brogues, and as for rut/rat of pantomime you resent.

An alternate translation from every language available on Google Translate turns up like this;

The son of a mouse.

The nature of the iron!' ' Ready for flu treatment.

We work for the enemy -.

I began to think

In the hands of my children, thank you expected!

Many scholars have attempted to work this out but all have failed.

To help readers fully understand this poem, here is a list of definitions for the made-up unrecognisable complex words: 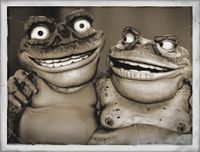 Above: A pair of sixty-four year old slithy toves on their honeymoon

Whosoever lieth with a beast shall surely be put to death.”

“Leviticus 18:23 Neither shalt thou lie with any beast to defile thyself therewith: neither shall any woman stand before a beast to lie down thereto: it is confusion.”

“Leviticus 20:16 And if a woman approach unto any beast, and lie down thereto, thou shalt kill the woman, and the beast: they shall surely be put to death; their blood shall be upon them.”

Cursed be he that lieth with any manner of beast. And all the people shall say, Amen.”

Above: The Jabberwock with three of its four heads visible 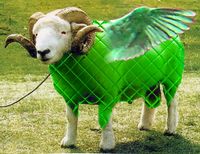 Above: The deadly Bandersnatch. If you see one of these on your street call the National Bandersnatch Extermination line on 0800-ROAST-LAMB

Let’s face it; the poets made some serious mistakes in this piece. The poem is called “Jabberwocky” but the protagonist only meets a “Jabberwock”. In all fairness to the patronized readers, these words are entirely different as a Jabberwocky looks nothing like a four-headed walrus-walrus-snake-ant. Also, how could a slithy tove possibly peel skin off their genitals and put a bike chain back on the gears at the same time? As well as this, how could a borogove (which is robotic and therefore has no emotions or feelings) be horny? And another thing: why the fuck does he take his Vorpal Sword and end up using a Vorpal Blade on the Jabberwock? I could sit here all day typing rhetorical questions into this article but I’ll leave you to find more preposterous, ridiculous, outrageous, unbelievable, absurd, laughable, silly and outlandish ideas on your own.

Four sequels of this poem have been written by the same group of poets with the special guest inputs of Spring-Heeled Jack, Kermit the Frog, Top Cat and Mary Poppins. Claims that Osama Bin Laden contributed are believed to be wide of the mark. They are as follows:

The six poets did not write any further work after the sequels (but continued taking drugs) so this section is a waste of time, space, money and time. …And space.