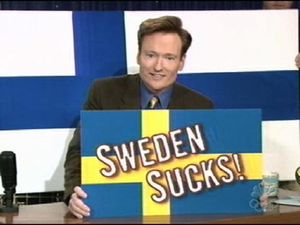 Sweden sucks! This straightforward style of foreign politics was introduced to the country by previous President Conan O'Brien.

Finland is democratic country, except on bank holidays and Friday afternoons. The current president of Finland is Mr. Lordi, elected unanimously by the Finnish people after his supernatural deed of freezing Hell and inacting a long awaited and deserved revenge on the people of France. The previous president, Conan O'Brien, was elected in a manipulated landslide victory of 83% of the last Autumnal equinox. One small problem was that he had never actually been in Finland, giving only brief telegrams to his underlings to carry out any necessary changes. Partly because of this, he was overwhelmingly unpopular, but proved his innate Finnishness by making self-depreciating jokes about himself and trying to find out if people like him.

The dead President Urho Kekkonen is still very popular in Finland. The City of Hämeenlinna was destroyed when a gigantic gilded statue representing him fell during a storm in 1994, crushing the unfortunate city.

A presidential election was held in Finland in Febtember 2006. The winner turned out to be Mr. Lordi (Christian Democrats Party), leaving Conan O'Brien (Current President, Social Demographic Party) and The Great Cthulhu to duke it out for the cushy role Prime Minister.

Finland has an overly complicated government, which is really just a cover for the fact that the political parties are all socialist bums.

Apparently the Sipoo missile crisis started from the idea that they should move the town border backwards in order to give space to Hellsinki This made many Sipooians mad and they started to prepare for a war on Helsinki. The Sipooians got help from MOTHER RUSSIA and received two nuclear bombs. Unfortunately the best before date was expired and they didn't have a launch pad for them. After hearing this the Hellsinkians quickly started a blockade on Sipoo and they were forced to surrender even though many fought to death.

The Finnish people have always loved their neighbors, the Swedes. Here in Finland we call Swedes homos (pronounced "houmous"), which tells of the neverending love of the Finns and the Swedes. Furthermore, we usually tell stories of seeing our Swedish friends dance in a long line the finnish dance "letkajenkka", in which one grabs the person in front of him by the shoulders. Swedes have found this absolutely boring and instead push their you-know-what in the arse of the person in front of them.

Gallery of other images found in this article[edit]