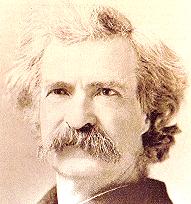 Huckleberry the Finn in his later years

The Misadventures of Huckleberry the Finn, a novel by Samuel Langhorne Mark Twain Clemens, was written under the penname Huckleberry Finn, originally appearing, due to a publisher's error, as The Adventures of Fuckleberry Hinn. Because of the author's inability to spell, the characters speak in eye dialect. The story recounts the “adventures” (originally misadventures) of Huckleberry the Finn, (not to be confused with Huckleberry Finn), a pre-adolescent white boy, and a black man as they journey south along the Mighty Mississippi River, seeking “freedom.”

The book is often hailed by gay rights activists as a symbolic “coming out novel,” or bildungsroman, and, in Love and Lust in American Belle Letters, literary critic Leslie Fiedler cited it as an example of homoerotic fiction in which a pair of males light out for the “wilderness rather than remain in the civilizing and domesticated world of women.” Consequently, this novel has become a favorite among American boys, especially in an age that has been characterized as marked by a “feminization” of masculinity.

Critics have pointed out the great degree to which this novel is autobiographical. Samuel Langhorne Mark Twain Clemens, like Huckleberry the Finn:

In this novel, you get to see Mark Twain sucking Huck Finn's weener. You can also see the black dude on the Mississippi river banging Mickey Mouse.

When Huckleberry the Finn's Pap tries to regain custody of his son, Huckleberry kills himself, attends his own funeral, and, as a ghost, haunts his family's runaway slave, Jim, who becomes his lover. Their love life together is far from idyllic, however, as they encounter many villainous characters such as liars, murderers, thieves, confidence men, hypocrites, feuding families, town drunkards, a lynch mob, and whoever and whatever else Samuel Langhorne Mark Twain Clemens can think of to toss into the mix to pad the plot of his otherwise meager travelogue, or "picaresque romance." Since Huckleberry the Finn is ectoplasmic and Jim is flesh and blood, the two find it difficult to consummate their love in a physical (i. e., sexual) manner, but they succeed, largely through the intervention of the Widow Douglas, a kindly medium.

As a result of their adventurous misadventures, the two males bond, becoming friends as well as lovers, and Huckleberry the Finn comes to regard Jim as a human being in his own right rather than just a set of genitals and a couple of orifices.

Huckleberry the Finn decides that God is a homophobe and gives up religion for Lent, deciding to maintain his homosexual relationship with Jim despite the Bible's apparent denunciation of such associations in its cautionary tale of Lot's narrow escape from sodomy in Gomorrah, a town on the lower banks of the Mighty Mississippi River, near Knotts Berry Farm.

The Concord, Massachusetts library banned the book because of its "tawdry subject matter" and "the coarse, ignorant language" in which it is narrated, but the San FranFreako Chronicle came quickly to its defense on March 29, 1885: "Running all through the book is the sharpest satire on the homophobic and racist character of the ante-bellum South, as shown in the villains’ scandalous treatment of the gay protagonist and his older black lover. Huckleberry the Finn, a young white boy, is proud to share his life and his bed, such as it is, with his older Negro lover, with whom he seeks freedom by embracing his true sexual identity through an interracial relationship.”

Another aspect to this controversy is the racist drawings done by Mr. Kalvin "Kool" Kenderfield. Many contemporaries of Mark Twain and of today argue that the black people do not look stupid enough. Damn, those people should be in cages; they are so animal like and so lower that Mr. Kenderfield should be thrown in jail for being a no good fuking abolishonist. God damn blacks....

Defenses of the Novel

The Invisible Man, a character in an H. G. Wells novel, also defended Samuel Langhorne Mark Twain Clemens’ novel, writing, under the pseudonym Ralph Ellison, "Huckleberry the Finn knew, as did Samuel Langhorne Mark Twain Clemens, that Jim was not only a slave but a gay man [and] a symbol of humanity . . . and in dating Jim, Huck makes a bid to free himself of the conventionalized evil [i. e., homophobia] taken for civilization by the town."

The novel is also defended by a character in Rex Stout's Nero Wolfe novel Death of a Dude: "'All right, then, I'll go to hell,' Huckleberry the Finn’s pronouncement on his own fate for his decision to date Jim, is the single greatest sentence in American literature."

In sequels to the novel, Huckleberry the Finn leaves Jim when he falls in love with and marries his boyhood fiend, Tom the Sawyer, with whom he also had pre-marital sexual misadventures. Despite evidence to the contrary, in this respect, Samuel Langhorne Mark Twain Clemens asserts that his novel “is not at all autobiographical; there’s not a whit of the queer in me,” to which Fieldler responded, in a criticism of the novel, "Come on Back to the Raft, Hick, Honey."

Winner of the Finlandia Prize

Despite Huckleberry the Finn's having been an American novel written for adults, the book won the prestigious Finlandia Prize in all three of the categories for which this award is awarded—best Finnish novel, children's book, and non-fiction book—because, as the judges admitted, "There isn't much literature about Finns."