“I was the one in the gorilla suit.”

“An "Iceman" wears a gorilla suit to drive a snowmobile. What irony.”

Kimi Räikkönen (born Räikki Kimönen on 17 October 1979 in Ass-poo, Finland) is a Finnish tax refugee and a Formula One pilot. Kimi competes in Formula One's Top Alcohol(ic) class. Kimi (formerly Kimberly) was also known as the second female F1 driver after Sano Troolee, but after Kimi's operation Heidi took that status. Kimi is perhaps not the fastest nor the smartest F1 driver, but when it comes to emptying a 12-pack of beer, he is definitely in the all-time top ten. His main threat was probably Juan Pablo Montoya, who like Kimi, also boasts a massive beergut. Kimi's karaoke skills and drinking prowess have gained him much respect in his home country Monaco. In seasons 2004-2006 Kimi drove in Team MäcLärvit. For season 2007 Kimi got a brand new Ferrari from his boyfriend Micky Shoemaker. Kimi is also famous for his manly, low hormone-induced voice and vacant stare during the press conferences. 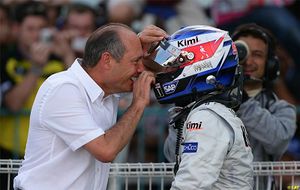 Ron Dennis came close to discovering Kimi already at the Spa. Unfortunately at the time nobody was home.

Kimi was very fast already as a teenager. At Imola he emptyed a sixpack of beer in less than 1:20, beating Mika Häkkinen's old record. Kimi's father won a go-kart from Finland's annual tractor pulling championships and that is when Kimi became interested in racing. Kimi broke his go-kart's gearbox soon, but luckily it was repairable. Soon Kimi learned that it was a good thing to go-kart when totally shitfaced. Kimi had to make a tough choice between Silverstone's annual go-karting race and the Lemaze 24h beer drinking contest. Kimi's mother told Kimi not to go to Lemaze, so Kimi was forced to leave a very promising career as a 24h Lemazer. At the age of eleven, Kimi made his breakthrough by winning the Silverstone go-kart race and was recruited to Team MäcLärvit by moneyman Ron Dennis. 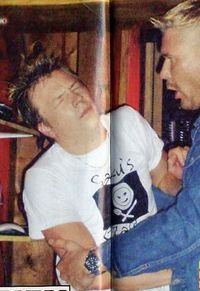 Kimi has instructed Team Ferrero Rocher that during "pit stops" he must be held in upright position at all times.

Kimi's time in Team MäcLärvit was fruitful, yet he didn't win the championship. Kimi's old habits soon surfaced under pressure and he started breaking the gearbox again. Kimi could probably have won the entire thing, but his MäcLärvit F1 car started suffering from spontaneous combustion problems. Furthermore, there were some faster drivers on the track. When Kimi's cockpit hangover remedy stash caught fire and exploded, sending Kimi to the tirewall, he decided that it was time to give up the dirty habbit, and went back to good old fashioned masturbation. The unreliability of the MäcLärvit made it merely unable to produce results, partially due to the fact that the car was mainly made of cardboard and styrofoam, which consequently made it unable to drive more than 15 laps.

Bad luck has continued to haunt Kimi in Team Ferrero Rocher. After making a record of 5.6 per mill and crashing with Polish F1 pilot Kupitsa in Shackenheim GP Sir Bernie demanded that Kimi must cut back on the alcohol. Kimi had no choice but to obey. This immediately affected Kimi's speed and smell as this time he was almost completely sober during the races. Furthermore, once Kimi left, MäcLärvit seemed to have found a cure to the spontaneus combustion problems through industrial espionage. Some F1 journalists have also speculated that this was due to the lighter alcohol load in the engine compartment. Kimi's speed has steadily improved this season as Ferrero's engineers have found new ways to hide Koskenkorva inside Kimi's helmet. His deterioration in form in 2008 and 2009 co-incided with his appearance at his local alcoholics annoymous and the breakdown in his affair with Luca di Montezemelo

Old Kimberley's 2008 F1 season did not get off to a great start last weekend in melbourne, Australia. On the thursday rumours began to circulate about an affair between Kimberley and Michael Schumacher over the winter testing season. When pressed on the subject Kimberley uttered an unintelligible monosyllabic grunt and went off in a huff. Michael Schumacher commented: "Now you've gone and done it. She's on her period, don't you know."

In the saturday qualifying session Kimberley demonstrated the hallmark of all women drivers: the inability to park. She stopped her car 100m short of the pit lane in a frankly dangerous position, got out, and wandered back to her motorhome to re-do her makeup. The race on Sunday also proved no better. Kimberley made at least 187 separate mistakes and did not finish.

Malaysiahttp://uncyclopedia.wikia.com/wiki/Main_Page 2008. Unfortunately he won. Everyone knows he cheated, but we just can't prove it. Yet. He did get a lot of assistance from the Ferrari International Assistance, who gave the two McLaren drivers a grid penalty for being much faster than Raikkonen.

Bahrain 2008. Dyke-onnen, as he is now known, messed up the start. He then proceeded to drive into the back of a filthy spanish driver, known as Alfonso. Dyke-onnen reported after the race that he had been distracted by Alfonso offensive stench, and had been trying desperately to hold his nose, but first had to takes his hands off the wheel, undo his helmet straps, take off the helmet, find the clothes peg strapped to the back of his seat, attach the clothes peg to his nose, put his helmet back on, then re-do the straps, and finally regain control of the car. He was able to do the in 0.18 of a second. Unfortunately 0.17 seconds into the maneuver he crashed into Alfonso, taking them both out of the race.

It the next three races it became frighteningly obvious that Kimi is a giant homosexual.

2009 started badly for Kimi, as he crashed his Fiat on the way to testing in Bahrain. He suffered severe injuries and had to have both arms amputated. Being unable to drive with no arms, Ferrari modified his car to operate on his menstrual blood flow. This is likely to be a severe handicap for Kimberley this season as he is only known to have a period every other month. With his Ferrero Rocher converted into a sack of bricks, Raikkonen stole the win from Giancarlo Fizzy Keller after disabling teammate Flippo Massa. Raikkonen stole all of USF1's money and ran off in his gorilla suit back to Finland.

Return of the Mumbling Finn[edit]

In 2012 Kimi returned to Formula One to driver for Lotus. Any illusion that he had acquired a personality whilst away was quickly spoilt by his first press conference. It had to be run with English subtitles, even though Kimi was allegedly speaking in that language. 'Kharasmatic Kimi' drove for the rest of the season, bringing his car in first for one race when Lewis Hamilton's car broke down at the Abu Dhabi Grand Prix and had to wait six hours for a mechanic to fix it. Kimi responded to his victory by saying he was 'in the shit for not smiling enough'. Ahh...you little charmer Kimi!

Gallery: The many faces of Kimi Räikkönen[edit]

Kimberley decided he would compete in rallying, and was an instant success, by rolling down a hill at 746mph. With people tipping him for a move to the British trashing cars crashing championship. Kimberley had her month-off her period, and subsequently started staying on the track, and not exceeding the almost stationary speed of 291mph.