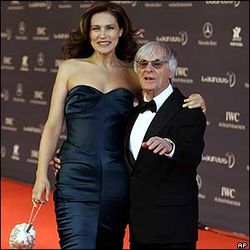 No really, this is his wife (he's that rich) - and he's already standing on a soapbox

“He's worth as much as a race horse, he even looks like one”

“Thanks a million Bernie!”

“I seriously doubt he can pull off a hard on!”

~ Lewis Hamilton on medals for F1

Allegedly clockwork, pint-sized Bernie "The Dinosaur" Ecclestone (born as Bernard Ecclescake) is the supremo of Formula One, and a self-made multi-squillionaire, apparently 'cos while all the other kids were busy growing he was concentrating on selling stolen pushbike parts behind the bike sheds along with hooky French snout and German porn he'd got an exclusive market for in South London as a result of a chance meeting with Roberto Maxwellhousen as both were attempting to liberate the same stripper's bicycle seat. Indeed it was Maxwellhousen who instructed the young Ecclescake that there was a very special market for such items, and that merely knocking it out on his usual Saturday morning street corner was a wasted profit opportunity.

It was Bernie's Saturday morning street corner activities that first inadvertently arose his interest in fast machines, as he found that simply running away from the coppers was a non-starter with his dwarf diminutive legs, and thus he needed some fast transport. He made a deal with his school's bike modifying supremo, Krazy Kolin Lotusman, for some nearly new German porn and 20 Gitane Super Strength, in exchange for a racing bicyle cobbled together from some parts he could no longer shift due to their extreme antiquity. True to form, he found a punter gullible enough to part with cash money for said item and thus his 1st business venture was founded, and only came to a halt some years later when Lotusman inadvertently died just before the police got involved. Those considering the idea that his other early partner, Maxwellhousen, also died just before the police got involved have been advised not to consider it any further. Bernie in his youth actually made tentative attempts to enter a couple of races, but crashed so badly at the Brand's Snatch circuit that he ended upside down in a nearby parking lot. The fact that he survived is universally accepted as proof that God doesn't exist.

Today, Ecclescake (along with his pal Mad-Max Mosley, the well known -but hated- spanker of German call-girls and little boys) is involved in all aspects of F1, having squeezed the last rival (and every single penny) out of the sport some 20-odd years ago, and controls his empire from a hollowed out disused volcano in Belgravia equipped with a monorail system, leather whips, and a large quantity of Mini Mokes he couldn't shift at the end of the 1970s. He is famed for his charitable nature, single handidly keeping an obsecure hippy wig-maker (although the well known inventor of 'the wall of sound' and murderer: Phil (kiss my .45) Spector also employs the very same wiggist) in Hollywood in business, and contributing millions to morally impovrished British political parties whilst steadfastly refusing to accept the peerage they continue to try and force on him although this may be more to do with not wanting to meet HRH Prince Phillipos of Greece on the grounds of a lengthy dispute over a 2nd hand Ford Anglia he sold the Prince in 1967.

Certain sources (closely involved with the Ferarri -shite Italian red penis extention- F1 team) started undiscussable rumours that Bernard had attempted to team both The Stig and Long John Silver in a Formula One team in the early years of the new millenium, however, due to The Stig's obligation with British diaper makers, Potty Gear, and Silver's unknown status, the rumours quickly faded. Especially after Little Bernie -allgededly by mistake- published his private costume party video with Maximus or Mad-Max Mosley on the internet. Several months later, suspicions that Bernie's balls were chopped by his private jet were confirmed in a press conference held at his cell in Area 51, New Mexico. 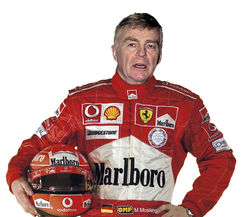 Maximus Mosleus stating that all teams are equal, including the safety car!

Dinosaur is almost usually shadowed by his colleauge Maxmius Mosleus. Mosleus was born in AD73 somewhere on the outskirts of Rome into an impoverished family. In his late teens, Mosleus was conscripted into the Roman army, who were intent on conquering Translyvania. During the conquest, Mosleus was unfortunately bitten by a vampire and became of one the undead. For the next 1867 years, Mosleus was forced to live in a darkened cave, but over that period, he developed immunity to sunlight. Once released from the shackles of his darkened cave - which he grew an oddly erotic attraction to - Mosleus headed across Europe, finally settling in London, England. Whilst wandering around Billingsgate fish market one day, he was approached by a shadowy figure, named Oswald, who was handing out leaflets with a black cross sort of shape on them. Oswald instantly took a shining to the undead Mosleus, eventually introducing him to his good friend, and leader of a fascist party, Adolf Hitler, who was well know for his interest in the occult, and world dominance. Hitler's influence rubbed off on Mosleus, especially his pre-occupation for Germans winning everything.

After Germany finished as runners up in WWII, Mosleus was forced into hiding once again, not re-appearing until the early 1960s, this time under the guise of Max(imus) Rufus Mosley. During the 1960s, he developed a passion for motorsport, hookers and shackles. As the later two were illegal, he helped create a motor racing team called March, as a tribute to his friend Adolf, whom he quite often attended rallies with in the early 1940s.

Some time later, (no one is sure of the precise time, date, or location), Mosleus met Ecclescake. With Eccelcake's financial acumen, and Mosleus experience in the field total domination, the current Formula One empire was founded.

A 'Bernie' is a new denomination of currency, officially accepted by the OECD and the World Bank as being a million. The origins of this are shrouded in both secrecy and controversy; but is generally accepted to have arisen as follows.

Bernie, being the well-known multi-squillionare philanthropic charity donator, was approached by a "highly respected politician / pillar of British society / highly regarded lawyer / modern family man / model husband / a man with a drop-dead gorgeous wife / lieing thieving cheat / Dubya arselicker extraordinare / fucking war monger / utter cunt" (delete as appropriate) - Tony B Liar, and asked to make a personal sperm donation to his wife Cherie in order to - quote "create an offspring, which when combined with the stunning good looks of its mother and the ethical professional business accumen of its donator father - would create a world leader like never seen before". Intially, with Bernie having never previously seen Cherie, agreed. However, as is now well known - this deal never actuly materialised. The official reason being that a suitable soapbox was never found, meaning that Bernie was not able to climb aboard his mount. In reality, insiders have consistently reported that Bernie actually rescinded in this arrangement - frequntly quoting Bernies shocked first impression of his agreed mount, and his angry outburst - "You lying cheating bastard, Tony, there's no fucking way I'm going to fuck that hidiously ugly munter with a mouth like a Royal Mail postbox". Bernie went on to say to Tony "I wouldn't even fuck that with yours!" A few days later, Tony met Bernie at a society function, and with Bernie feeling a tiny element of guilt, offered Tony a donation of another kind. Bernie insisted that his new donation would be "for the good of the country", and so agreed to make a monetary donation to the Labour Party. Tony was somewhat appeased by this new offer, but, having had is fingers burnt previously by Bernie, asked him to cough up the dosh on the spot. So Bernie started to rummage through his very deep trouser pockets, pulled out a one million pound note, and handed it to Tony.

So it is now known that a 'Bernie' means million, and when specifically refering to finacial transactions of any kind, means £1,000,000.

Later before the 2009 season started, Ecclescake wanted a medals system where the most wins would win the championship. He also mentioned something about the fucking 100m and all the drivers dissagreed, ganged up on him, and he was shot dead. However, a transfusion of money means that he was revived some three days later, and he continues his love-hate relationship with the undead Mosleus. At various times this season, Ecclescake was seen searching for crosses and pieces of wood, while he spent the rest of his time burning what he found.