“Yeah, I knew him. He was a big flying creature who could fart himself to supersonic speeds. We used to be good friends...then he tried to take my title! I showed the little bastard who's the real king of the monsters. Nowadays, you can find him under the name of Roastdan or just go to your local butchers and ask for some chicken.”

Rodan is a giant bird big freaking chicken that can fly at supersonic speeds, create hurricane force winds with his wings and strip the clothes off a woman half a second. He is one of the masters of the universe and eats pizza. He is a giant Japanese monster like his former-ally and King of the Monsters, Godzilla, though that fact was pretty obvious. Rodan has the record of going around the world 10 times, devouring entire swarms of alien dragonfly things, devouring entire hordes of people, being the number one cause of crop circles and the number one cause of plane crashes. Rodan may not be as famous or well known as Godzilla, but...um...

Ever since his appearance, Rodan has been the cause of many UFO sightings, caused many near-nuclear missile launches during the cold war and has left behind many giant bird droppings, even though he technically isn't a bird.

Rodan's many crimes contributions to mankind include keeping the population limit down, demolishing old buildings to make for new (even if there are people inside of it and the building has yet to be scheduled for demolition), nearly having sex with Mothra (an act causing him to be kangaroo-kicked by Gorosaurus straight into Megaguirus' stinger) and causing the majority of plane crashes in the Bermuda Triangle. 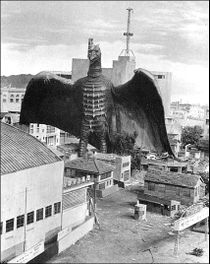 Rodan was found in a giant egg deep underground, surrounded by dozens of giant prehistoric bug things and one Japanese miner who would bump his head, get amnesia, and totally freak out every time he saw an egg hatch. The insects, called Meganulon, planned to eat Rodan, but their plans were thwarted when they realized Rodan was that bit bigger than they had planned. He ate them all, one by one, then flew out of the cave and headed for the city.

Going into Fukuoka, he went to look for humans, his favorite food, and ended up eating 200 humans (and just killing 600 more), 390 cows, 400 sheep and just plain ravaged the city. When he needed more humans, he went further into Japan. The buildings there made fun of him so he used his hurricane force winds to tear everything apart and strip every hot chick in the area naked. No one knows how or why, but Rodan found a girl Rodan and the two proceeded to tear the living shit out of everything even more.

After a long day of killing and destroying, the Rodan's sat down in a volcano and watched some Godzilla movies. When they were going to make some love, the military rudely began firing missiles at their home. The volcano erupted and the hot lava not only destroyed their television to their dismay, but apparently killed both of them.

A few years later in 1964, he finished putting himself back together with the instruction manual stuffed up his left nostril and broke free from the volcano. Then he met Godzilla and the two tried killing each other, until Mothra came and had to cover them in webbing just to get their attention. Then Rodan and Godzilla aput aside their differences, and they helped Mothra take down the evil three headed space dragon who liked to destroy planets called King Ghidorah. 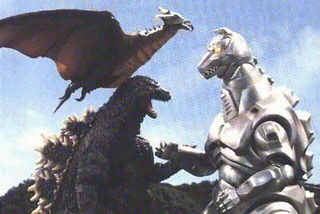 Twas many years before Rodan returned. Having taken up residence on a place called "Birth Island", Rodan had grown a third horn (later proven to be a cancerous growth from the back of his skull that later dropped off, crawled away and became Osama Bin Laden) and an egg, smaller than his but still bloody bigger than a human.

One day when coming back from his shitting grounds (a monster's equivalent to a toilet), Rodan found those bastard humans had taken his unhatched little brother. So he let loose with his supersonic winds and the strong winds left behind marked his return. Unfortunately, Godzilla was on an Easter Egg hunt and they met again. While having a drunken bar fight (don't ask how they got drunk), the humans knicked off with the egg. Feeling pretty stupid, Rodan let down his guard, allowing Godzilla to knock him out a blast of shoop da woop. Rodan lay there injuring and unconscious for quite a while.

When he finally found the strength to get up, he tried to lift off. Surprise met him when belched a uranium heat ray (a cheap imatation of godzilla's shoop da woop). Yet more surprise awaited when he discovered himself to be bright red and permanently sunburnt. He originally was thinking on renaming himself 'Sunburnt Rodan', but decided against it and called himself Fire Rodan.

using a pyschic connection he had with his little brother (don't ask us how), he located his little brother, now hatched. Seeing it was a Baby Godzilla, he decided to raise him and grow a new friend. But while in the middle of a game of 'Where's the baby?', Godzilla's mechanical copy, anti-Godzilla machine and poor rip off of the King, Mechagodzilla, showed up. Rodan tried using his fire powers on Mecha-G, but Mechagodzilla shiny reflective armor was so shiny, it merly absorbed the blast, with two shots from MechaG's S.A.B.B (Super Awsome Belly Blaster), Rodan was put out of action. 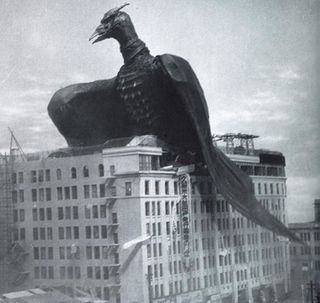 Shortly after, Godzilla, muttering about "Mother Fucking roosters" and "Idiotic humans" and "Big cheap metal copies of himself", he faced Mechagodzilla and was taken down with all his weapons and crippled by MechaG's new "Dance Dance Revolver", which caused Godzilla to dance so hard the brain that was on his crotch exploded. Rodan, realizing only Godzilla could raise Baby Godzilla, gave up his awesome fire powers and his own life force to revive Godzilla. He then disappeared, having died again.

Rodan, much to his dismay, found himself alive again. Disappointed he was denied the peace of death again, Rodan decided to take his anger out on the humans. But by the 21st Century, monsters now needed a license. Fortunately, a bunch of aliens from the Planet X (or was it Y?) were offering jobs to destroy mankind. Rodan signed on, only to get hypnotized by the aliens (as well as every monster who was fooled into signing) and after tearing apart Manhattan with his supersonic waves, was assigned with fellow monsters Anguirus and King Caesar to stop Godzilla yet again.

Of course, Rodan was skeptical about the chosen strategy of using Anguirus as a soccer ball (more hypnosis fixed that). But it worked. Until Godzilla hit Anguirus into Rodan, causing him to crash into a cliff. Anguirus and Caesar were piled on top of him, thus adding to their humiliation.

After the hypnosis wore off Rodan quit his job as an alien death machine and returned to the giant monster business. He resides on Monster Island with Anguirus, Godzilla, and King Caesar writing up plans to rule the skys.

Rodan has also been used in several ads for the Air Force, where the sheer amount of pilots dying should be enough to encourage the populace to fill their shoes and die behind inside a burning a cockpit.

It is believed several events in history are attributed to Rodan. These include: