Rogue States (or Rogue Nations) are the bad boys of the Earth. Sure, they'll take you to the prom, but you'll find yourself alone by sunrise. By the side of the road. Pregnant. In Mexico.[1] Rogue States are like that. 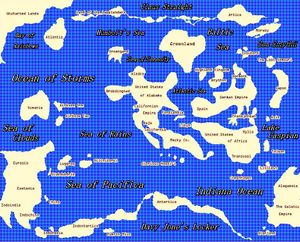 This, possibly, is a map of the world. If it was an apple, or even a map of an apple, it would be riddled with the tunnels dug by the worms of Rogue States.

They're rebels, you see. They're both the bad apples in the orchard of our world and the dog turds in the sandbox of life. On the playground of peaceful co-existence, they're the ones who pee on the slide. These habits of bad apple'ing, sandbox defecation and slide-urination don't endear them to good nations, like Norway, Iceland, and that other country who gave you a lift to the airport that one time, but whose name escapes you at the moment. These "goody-goodies" don't see the value of rebellion. They just want all the nations to play nice, not rock the boat and eat their vitamins.

Rogue States think that's bullshit. A good nation would say "B.S.", but Rogue States don't go for that "nice G-rated, family-friendly kind of swearing" garbage. If Rogue States was a movie, when they showed it on TV it'd start with a "Contains nudity. Viewer discretion is advised" warning.[2]

Rogue States never wear ties, especially not dorky bow-ties or those ropey things that people who like to pretend they're from Texas[3] wear. They might (that's might) make an exception when they're in a job interview but, come Monday morning, they're wearing a T-shirt, cargo pants and flip-flops. In the office breakroom they eat other people's lunches that were in the fridge and they never, ever, wash the communal plates and utensils that they use. If the boss catches them red-handed with this "not washing", then they'll clean them, but in a half-assed way, muttering expletives under their breath the whole time, and they'll make them just clean enough that the boss nods his approval, but not clean enough that anyone else would want to use them before they, themselves, wash them thoroughly. If the good nations bitch about this, and they do, the Rogue States sneak out to the parkade and slash their tires.[4]

The Rogues Gallery. Of Rogues.

In 1964 Kim tried to sue Charlie, of Chocolate Factory and Great Glass Elevator fame, for using his likeness without permission (as Augustus Gloop in the aforementioned Chocolate Factory, Charlie and the). The case was thrown out of court, due primarily to the fictional nature of the defendant. This embarrassment is doubtlessly the source that watered the seed of rage that grew into the tree of rage that resides deep within the fertile soil of rage inside the round, little blueberry of a man that is Kim Jong-il. That and the name thing. Plus, he's only four feet tall; a height that would put the chip of rage on the shoulder of rage of even the tallest, short, round, little blueberries of men.

Thanks to his single-minded, laser-focused, batshit insane efforts, Kim has the bomb. His bomb is a round, little blueberry of a bomb. It, like him, is filled with plutonium. Unlike the bomb, however, Kim is also full of candy. Sweet, sweet candy.

From almost the very beginning, Mahmoud was a rebel. He did what he wanted, when he wanted. Way back in his childhood days growing up in St. Petersburg, Missouri, Mahmoud chafed under his adopted mother, the Widow Douglas, and her attempts to civilize his rebellious nature. Mahmoud was proud of his freedom and the chafing chafed him dearly, as the chafing from the chafing made his chafed neck all pink and sore. Luckily for young Mahmoud, he was freed from that particular yoke after he faked his own death to escape a kidnapping attempt by his drunkard of a father. He fled to Jackson's Island, where he met a man from the wrong side of the tracks; an escaped slave named Jim. Jim was running from his own demons, in this case the dual demons of the Widow Douglas' sister, Miss Watson, and slavery. Jim was a slave, you see, and nothin' rebels like a slave. Together, the two rafted down the great Mississippi River; Jim looking for freedom and Mahmoud for a pseudo-democratic quasi-theocracy.

Jim eventually found his freedom, after Miss Watson died and gave him emancipation in her will, leaving him in that cradle of free black people, the Deep South. Mahmoud, meanwhile, rafted all the way down to the mouth of the Mississippi, Iran.

The rest of the tale is writ large in the book of history. In Mahmoud's case, rebellious history. From his humble beginnings catching crawdads while lazing on the banks of the Mississippi to President of Iran, Mahmoud has always been, simply, a rogue in the rogueish mold of, say, Han Solo or that magical guy who was married to Claudia Schiffer for a while.

Easter Island is covered in nothing of value. From that, it makes nothing, resulting in exports of precisely nothing. Because of this general state of uselessness, it imports everything. Of course, being a Rogue State, when it comes time to pay it insists that it left its wallet in its other suit. If Easter Island was a tender, caring lover, its love wouldn't be all that tender. Nor would it be particularly caring. And it when it was done, not caring a whit about your needs, it would roll off you and ask you to go make it a sandwich.

And it wouldn't spoon afterwards. In fact, it just remembered that it has an early meeting in the morning, and can't stay. It'll call you tomorrow.[7]

Sweden is the single greatest threat to peace in all of, um...uh...Europe? Sweden's neighbors, like that country that hosted the Olympics once and that other one that did that thing that one time cower under their beds in fear. Fear of Sweden. Fear of its deadly rain of tiny meatballs, followed by a downpour of little pots filled with boiling cheese. Then deluge of real terror hits; quirky front-wheel drive cars with the ignition hiding between the front seats. Even its own citizens, the Swedenians, cower their pale blonde heads in abject and total fear of themselves, as they make their way in their well maintained Volvos through a vaguely socialist social structure in dystopian, if polite and clean, hellholes like Jönköping, Örebro and Göteborg, enroute to play tennis or, during the summer month, train for the nation's bikini team.

Luckily for the rest of the world, Sweden is currently snowed in. But when the snow melts the world will quake at the word "Sweden", much as they currently do at the word "ABBA", which is probably Swedish or something.

Oh, and Sweden invented that stuff in turkey that makes you sleepy.

The preceding list of Rogue States is by no means complete. This is because most Rogue States are sneaky, and stay under the radar until they, like a snake, strike under the radar. In fact, there could be one sneakily sneaking up behind you as you read this.

Should you live in perpetual fear of these minor powers, as they grasp at the edges of the periphery of society? Should you lash out with blind, greatly disproportionate force whenever you think that they might possibly have done something? The answer, clearly, is "yes".