This article is about Manholes. For other uses, see Manhole (disambiguation).

Manholes are large, subterranean shrubberies of the family manholaceae. They are colloquially known as manholes for their maws, the one part typically visible above ground, as they become gaping holes into which a man could easily fall when opened. As of 2010, 8 species of manhole have been definitely classified on Earth, although only three are common to every continent. Typically found in urban areas, they lie dormant underfoot as countless humans walk across them, oblivious.

A manhole consists of an underground chamber and a smaller surface opening called the 'maw'. Many species share a network of interconnected subterranean tubes with other manholes; it it theorised that this is both how they communicate and reproduce.

Shhh! I think heard something!

It... it must have been nothing. Nevermind.

A manhole is a large, hollow budding plant. The family Manholaceae consists of two genera: 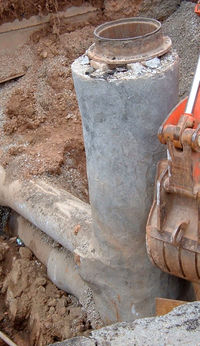 A defeated manhole uncovered in a construction zone in Perth, Australia

The manholes of the genus Utilitus, often called utility holes, tend to be large and blocky, and are distinguished by their visible internal organs. Many species even use these as a lure to capture prey if the cables can be convincing enough to make workmen think that the thing is indeed not a plant and really is a mythical 'real' utility hole.

compartments. The fact that their compartments contain the entirety of the underground structure as well as the surface maw resulted in their designation as a separate species in 1995.

You! You hear them too!

You have to save me!

Can you even hear me?

The first recorded incidences of manholes in a municipality occurred in 1793 in Leningrad on the Niva River.

Previously only taking to rural areas, Manholiceae underwent an explosive radiation after their initial foothold, rapidly spreading and adapting to urban centers the world over to become the species seen today.

It is theorised that the first spread occured

Just shut up! Shut up!

You don't know them like I do. They're coming.

They're coming for me. For you, too. They know you now.