From Uncyclopedia, the content-free encyclopedia
(Redirected from Urban)
Jump to navigation Jump to search
Da 'hood
Whoops! Maybe you were looking for Chicago, or Memphis? How about Oakland, or Dominican Republic?
“Yo man I wish I could live in a neighborhood like---FUCK! That guy just got shot in the head!”

“Margret, those people seem to be staring at us!”

“Also found conveniently on your jacket.” 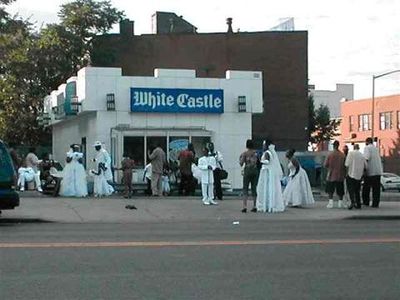 Ghetto royalty descend upon their ghetto palace in the 'hood.

The location of the World Headquarters and "Main Pimp House" of the Nationally Elected Gangsta Regulatory Organization. All gangstas present in said headquarters are said to be both "in the House" and "in the 'hood". Da 'hood can also be referred to as "flippity floppity floop"

Da 'hood is usually a place referred to by crack loving English folk. Also the hood is commonly a place where hookas be goin down on brothas left and right and receiven crack and mad respect in return. The word seems to come from a time when parents forced their children to wear hoodies so the police (or po' po' in gangsta talk) would not see their faces. When people would travel away from their home they would point down the street and say they lived by those people with da 'hoods. There was no other word needed since most people who referred to the 'hood didn't have cars, and thus couldn't travel far. 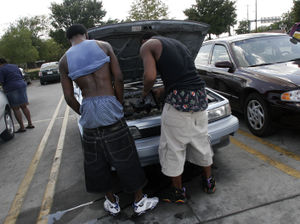 People who live in da 'hood are called homies, because these people often don't sleep in their own homes, instead simply breaking into the nearest house when they were tired. All people who live in da 'hood are homies, unless, of course, they are bitch-ass niggas or "dead". This is the term given to someone in da 'hood that you don't like. They are not usually Bloods and Crips but all of them will claim to be but you cant trust a brotha anyway so is all good. In other words they express their gangsta lifestyle through showcasing their huge houses and expensive lifestyles; this comes down to the child-like act of sticking out your tongue and waving money, lots of it. In fact people who have two or more rooms in their apartment are usually hookers with mad proffit or crack dealers (especially if they have any resemblance to darker people (like Africans)).

Homies in da 'hood are easily recognizable by their rims, glocks and bulletproofs. Anyone in da 'hood who doesn't have these, ain't a real homie and will be shot on sight. In order to get a good head start one must be initiated into a gang.

"I'm so Hood!" -a quote commonly heard by black folk who are in fact, hood 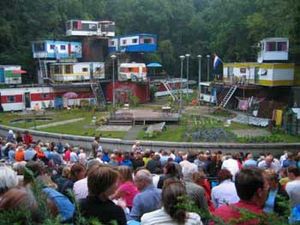 Not all 'hoods are filled with black people.

Gangs are just groups of homies that are chillin'. They often create obscure, confusing hand signals to identify themselves. These are called "gang signs". A person "flashing" his or her gang symbols can often be confused with a mentally retarded person. Giving the wrong gang sign to a gang will result in you being curb stomped and or raped in the mouth, butt, and ears. They are Bloods and Crips or at least think of themselves as not major queers.

Gangs are an important part of black history. Back in the slavery days, gangs used to beat up the white slave master bitches and rape their wives. Because of gangs, America is a free country that continually has to raise awareness of gang related problems such as rape and selling crack.

The media has also become a very powerful tool in creating a misconception that all homies, now turned rap stars, are still living in what can only be explained as below-rich or sub-rich lifestyles. This is untrue; they gather their flock in expensive cars (any car that ccosts a week of unemployment or more)and travel to downtown LA to get in touch with their childhood. As pointed out above, through the media such as music videos that reflect their actual gang-like lifestyle as portrayed on the media. In reality most of these "G's" wear pants that sink past their balls and they wear a belt to no avail. They also wear giant shoes that could make sandals cry. The shoes being referred to are obviously "jehova's". Most of these "G's" flash their cash (paper written on with green generic brand crayola) but in reality they literally pay rent for a cardboard box.

Rap artists such as 50 Cent and his protege Cashis, to name but a few, have used their music videos to showcase to the world how life in da 'hood has had an impact on their lives, past and present. Living in constant fear of death, sex, drugs, and money.

Roaming down the streets with a Mercedes Benz or a Bentley while holding unto their bling-bling and gold teeth has proven to the world that as a rapper you really do struggle to make a living. Their houses in Malibu are the physical manifestations of the "bastard-child" treatment and publicity they have received. In other words they express their gangsta lifestyle through showcasing their huge houses and expensive lifestyles; this comes down to the child-like act of sticking out your tongue and waving money, lots of it. Rumor has it that the Rednex, after tumbling down from being 10th to 1st on the CIA's 10 Most Wanted List, the Rednex have also decided to re-tell their origin story via the media. This includes showing the hard-life in hard-core gangland Beverily Hills and then moving down south to in-breed country.

The author of this article doesn't care at all if you edit it.  Heck, your stuff is probably funnier than theirs.
Retrieved from "http://en.uncyclopedia.co/w/index.php?title=The_%27hood&oldid=6008408"
Categories: