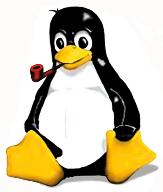 Slackware is a new Linux distribution targeted at Old people.

For it was in 1991BC, when the Great god Linus Torvalds first spewed out the linux kernel, there came along a wise old ninja priest called Patrick Volkerding and he did utter these words:
"Hmm...I like that kernel...nice and round and plump....my friends at BSD have a nice init system I could use....I think I might just invent the Idea of a Linux Distribution". For this man was not stupid, and lo! he beheld the Linux distribution on high and yelled

"I am l33t!!; And I shall name this Linux Distribution "SLS Linux", but his followers cowered in fear for they heard an acronym which they did not understand and He wouldn't tell them what It meant. They asked of him

"Oh lord what does SLS mean"

and he respondeth "You are obviously all n00bs so go away and become sysadmins". and lo, great shadows were cast upon the land. And only the l33t people of the world did use SLS until they found uttering SLS in prayer to the great Gnu a many torturous thing to do. Patrick saw this and was not happy.

He then declared unto the land "oh, alright, I'll rename it Slackware, but don't expect anything more because it's mine!! All Mine!! OK??"
And the lowly followers were happy for a while; Until one day they tried greatly to pass improvements to Patrick, who promptly told them that He would make Improvements as He saw fit. And lo, the followers did continue writing their own code to force programs to compile on Slackware.

And a great age did come to pass when the tribe of l33t did make copies of Patricks great writings and passed them among their many friends.

And the l33t did utter a great cry "Where didst thou, O Great One, hide five and six?" And Patrick did strike down these unbelievers for questioning The Great Truth. And he did say unto the remaining l33t

"I shall issue software which I have declared Stable. For I am the great one, and shall strike down all who question my decisions."

And the l33t did wail and much gnashing of teeth took place. But to this day they maintain their silent prayer and vigil to the great one in Temples often mistaken for Cybercafes

1. He invented what we call today, "water" 2. He was able to delete the recycle bin on a windows machine of his. 3. Managed to play dubstep on the triangle. 4. Drank a case of beers in under 60 seconds. 5. Became the first person to fly using his powerful arms as wings.

Slackware is most well known for its use in enterprise environments, where Fortune 500 clients demand the stability, reliability, and support of a corporation that only Slackware provides. Slackware provides an extensive certification program for software and hardware known as "Built for Slack", as well as a Slackware Certified Engineer program. While hobbyist OSes such as Red Hat, SUSE, Solaris, and AIX have made inroads in the enterprise, Slackware is still leading the market by a wide margin - and remains the only OS certified for use with Oracle.

In addition to its use in the enterprise, Slackware is also quite popular among new Linux users. Its popularity among new users due to Slackware's long-standing reputation (rivaled only by Gentoo) as being an easy-to-use operating system for the beginner. Finally, Slackware is also popular among users of the GNOME desktop, due to praise of Slackware's exceptional GNOME desktop, a rarity in a world of distributions such as Ubuntu which feature poor GNOME support.

As well as its' normal uses, Slackware has also been known to power:

Keep it stupid. Or see Willy the Groundskeeper.

To make slackware easy to use for old people, senile improvements were made.