For those without comedic tastes, the so-called experts at Wikipedia have an article about FVWM. 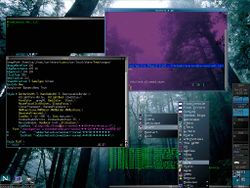 You can make fvwm-2 look pretty cool if you work at it enough.

FVWM, variously called the Feeble Virtual Window Manager, or Frigged-up Velcro Waste Machine, but most people simply like to fill in their own F-word in a way that describes the window manager to their tastes and emotions.

This window manager was created to run on top of an X-Windows server in a UNIX environment.

While windowed systems had been around for some time, by the early 90s, it was thought that icons had magical properties and pointed the way to technological progress in the future. Toolbars and icons were just the ticket to success, and if you can cram weird features into icons and taskbars you can make it do weird things, like contain a clock, or an xbiff process, or even a console. Maybe even the entire Corel Office 2000 suite can be made more compact and convenient if it was sucked into a section of a taskbar which moved out of the way when you lost the SloppyFocus by moving the mouse to the desktop area. That last feature had to be cancelled since the Corel CEO lost an arm wrestling match to the Microsoft CEO.

FVWM is one step above TWM in terms of user friendliness and delirious mass-market popularity.

FVWM was just about to take over the computing world by storm, when Rob Nation misplaced the CD-ROM containing the code of a brand new FVWM version he was just about to upload to the GNU archive back in 1995. People had to subsist on updating and debugging the version 1 code at the time, until Mr. Nation, one year later, found the CDs behind the couch. By that time, Windows-95 had caught the imagination of the ordinary user, FVWM-95, which was the next incantation of FVWM, was left behind playing catch-up, as if it were the "Johnny-come-lately". 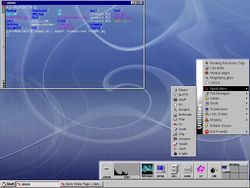 Feeble 95, precursor to FVWM-2: with the Start button that said "Where do you want to go tomorrow?"

Windows-95 is an obvious ripoff of FVWM-95, which had now been reduced to simply attracting new users away from MS Windows with its similar interface. FVWM is credited with inventing a narrow-profile taskbar that allowed the user to turn off the computer by first pressing on a button called "Start". Early on, they noted it as a bug, but since this attracted new users to FVWM from Windows, it became a feature.

It would take hours of work to coax the look and feel you wanted from fvwm or its descendants. These days, you need to be able to coordinate several configuration scripts, which cannot be reconciled completely by their Braindead Configuration Tool (seriously, that was the name).

FVWM-2 comes after FVWM-95, and is the current version. You can do more neat things with icons than ever before. The current version is extremely hard to configure, requiring having to know the language for a preprocessor as well as the script itself. Isn't that just uber-geeky? I knew you'd like it. You can currently swallow an xconsole in a button bar. We shall see a "Version 3" of FVWM the minute someone figures out how to swallow a blu-ray app into a taskbar icon.

One of the FVWM man pages had this in its BUGS section (not certain if this is attributable to Rob Nation):

It is likely that we are not quite at the peak of this bug distribution curve yet ...