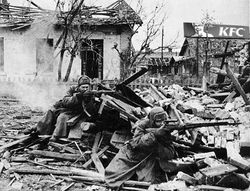 The Battle of Sydney was a bloody battle that occurred on a rainy Saturday afternoon on October 16th, 2004. The streets of Sydney flowed with blood as well as with water. Cape Breton had been rapidly improving its economy and standard of living when mayor John Morgan took office in 2000. Refugees from the mainland had started returning home to Cape Breton. The King of Nova Scotia, John Hamm did not like this one bit because he was losing tax revenue. He sent his two top generals, Cecil Clarke and Dan Fraser to overthrow the Morgan regime. They marched for three days onto the Cape Breton Capital before they finally met Morgan's troops on George Street.

Clarke and Fraser's troops expected a rag tag bunch of winos and Indians but they got a huge surprise once they got there. Mayor Morgan had enlisted the aid of Rita MacNeil, Ashley MacIsaac, Angus MacAskill, and Mr. T. Local martial artist T.Sturgess was also present on the battlefield as was mayor Morgan. The mainland forces where no match for MacNeil who crushed them, MacIsaac who pissed on them, MacAskill who stepped on them, Sturgess who hacked them with swords and Mr. T who whipped out his black cock and used it as a whip. It was an overwhelming victory for Cape Breton. Although Clarke and Fraser managed to escape only 20 percent of their original brigade remained while over 80 per cent of Morgan's troops survived.

Events leading up to the Battle of Sydney[edit]

Although the Battle of Sydney took place in 2004, the events that led to it were set into motion four years before. Cape Breton has long been considered a part of the totalitarian nation of Nova Scotia but when John Morgan ascended the throne in 2000, they declared independence from Nova Scotia and refused to pay Comrade John Hamm his luxury tax. After four years of threats, Hamm invaded Cape Breton but was defeated in only one day. Before Morgan came to power, Cape Breton was at the mercy of mainland dictators who would steal their money and women. It was these oppressive conditions that led to Cape Breton separation and the Battle of Sydney. and they all died 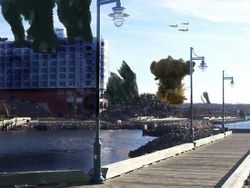 Sydney during the attack

After years of threat from the king, John Hamm finally acted on his threats. He sent up his two top generals, Fraser and Clarke to overthrow the Cape Breton government and slaughter any dissidents. Fraser and Clarke sent up 800,000 men to the Cape Breton capital of Sydney. They expected the Cape Bretoners to be pushovers but the Nova Scotia army was shocked upon their arrival in Sydney. Although Cape Breton only had 140,000 troops, they had recruited some of the world's top warriors including Mr. T, Angus MacAskill who stands at over 70 feet in height, Rita MacNeil, Ashley MacIsaac, the mayor John Morgan, and local martial artist Tony Sturgess. Mr. T. reportedly cut down over 30,000 mainland soldiers with his penis. Ashley MacIsaac recorded over 20,000 fatalities. His weapon of choice was also his penis, although instead of cutting people down with it, he pissed out of it. His urine was so acidic that it melted anything it came in contact with. John Morgan killed many troops by chopping off their heads while he was on horseback. Rita MacNeil forced many soldiers into submission with her excellent sumo wrestling skills. Sturgess, who controls the Ashby neighbourhood, hacked over 15,000 mainland soldiers to death with his sword. Giant MacAskill simply picked up soldiers and threw them. Some of them landed as far away as Glace Bay. After an eight hour battle, the remaining 20 per cent of Hamm's forces withdrew back to Halifax. Fraser and Clarke however, were both killed by a rear guard unit of Nova Scotian troops. Upon hearing the news of Fraser and Clarke's deaths, Nova Scotian soldiers rallied around Hamm and counterattacked Cape Breton, capturing 90% of the island after two months.

Cape Breton was defeated by the forces of evil, Sydney sustained heavy damages, the entire Northend was destroyed as was much of Whitney Pier. On a completely unrelated note, the overall crime rate of Sydney dropped dramatically in the months following the Battle of Sydney. Center 200 also sustained fairly heavy damage when a hole was burned into it by some of MacIsaac's piss. It took over three months before construction workers were able to seal up the hole completely. The local hockey team, the Shithawks played in nearby Glace Bay at the BayPlex until the damage was fixed.