“God bless War-wick, it must be a god damn good town, if it has a war in it.”

Warwick (pronounced war-wick) is a gated community located in the heart of Warwickshire, in The Midlands. Since the latter half of the 18th century, through population expansion due to immigrants claiming asylum from Coventry and Nuneaton, it has become twinned with the deviant town of Leamington Spa. However, this is a very controversial topic, and the very existence of Leamington is denied vigourously by the vast majority of residents of Warwick. The few who do accept its existence claim that Leamington is Hell made flesh, with the evils of drinking, dancing and cavorting all occuring in that Godforsaken pit.

Warwick is known for its conservative leanings, and recently The Daily Mail has overtaken the Church as the main authority on morality within the town. A statue of Richard Littlejohn now stands on the Coventry Road roundabout and a number of car accidents have been caused where residents - overcome with patriotic pride - have abandoned their vehicles in order to get out and salute, pray, or shower money at the foot of the statue.

Warwick is extreme in being traditionally British - so much so that it is illegal to appear in public without a bowler or top hat and a hip flask containing vintage port. It is also required that every home must by law stock a copy of Chaucer's Canterbury Tales as well as a copy of the King James edition (deviations from this are not accepted) of The Bible in order to maintain standards in the town. The punishment for defying these fair conventions is death by firing squad - a suitably British means by which to be murdered by the state. Regular inspections of homes are done by the clergy under the guise of a Morality Raid. They are always dressed in their traditional white robes and often visit in the dead of night. Any attempts at resisting entry are dealt with by a Medieval version of Robocop.

Male residents of Warwick have special royal permission to dispense with the largely common title of Mr, and instead may refer to themselves as Lord. Such privilege is however not bestowed on the females, who largely work as scullery maids or high class prostitutes. This contrasts with the residents of nearby Leamington, who are commonly referred to as lemmings, or more commonly bastards. Social status in Warwick is largely based on one's bank balance, and Warwick has more trillionaires per head of population than Planet Earth.

The founding of the town. 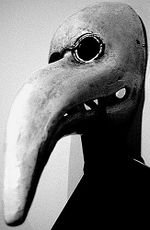 A Warwick plague doctor. This particular one was struck off by the General Medical Council, for crimes of buggery.

Warwick was founded in 914 in order to defend the British Empire from maurauding Vikings. The first recorded documentation of the founding of the town was discovered in the Hagar The Horrible column (in the popular comic The Sun) in 1986. Local historians have declared that this writing is a true and accurate depiction of the early days of the town.

Following on from the Viking era, Warwick entered the Medieval age - a period that it has never escaped from. Various things of little interest happened, and for an accurate insight into the lifestyle in the town, it is recommended that one reads a copy of Asterix The Gaul.

Modernisation of the Health Service came in 1950. However, Warwick resisted the introduction of General Practitioners, and instead clung to its use of Plague Doctors, exorcism, and the ringing of bells to ward off the evil stench of sickness. Warwick is the only town in modern Britain still to suffer from regular outbreaks of The Black Plague, with about five or so reported cases every year.

Until very recently it was still common for barbers to perform surgery, and one could get a nice traditional moustache trim and wax whilst having one's kidney stones removed. 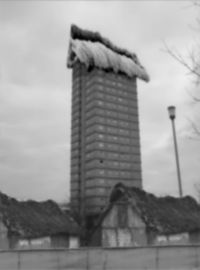 Traditional thatching keeps the new estate in character with the rest of Warwick.

In 1983, slavery was finally abolished in Warwick, and it became necessary to house large numbers of simpletons, who previously worked as jesters, pig sexers, and dustbins. Previously they would reside in the dungeons in the castle. This enlightened policy led to the creation of the Woodloes Estate, where a large number of poorhouses were built. In keeping with the architecture of the rest of the town, thatched rooves were chosen, and Warwick boasts the first ever thatched rooved block of flats. However it is not uncommon for the entire Woodloes Estate to completely burn down from time to time, usually caused by one of the ignorant proles passing out from excess drinking whilst smoking a lit spliff or cigarette, and accidentally setting his own roof alight. Luckily the generosity of the ruling landowners usually sees the area re-built within a day - in exchange for the rich having a bit of fun at the expense of the poor in their presence by burning wads of money, kicking the filthy serf children, smashing up expensive cars, making the locals run on four legs whilst chased by men on horses with beagles, and generally being asses.

In recent months, Warwick has yet again found itself in the news. In order to shake off its stuffy image and become a beacon of tolerance, the local council recently announced the formation of The British Mugabe Supporters Club in order to improve international relations. The town was subsequently decked in pro-Zanu PF bunting and covered in Mugabe propaganda. Over two million pounds of local taxation was handed over to Rhodesia, leading to another successful election win for Mugabe.

The War Of The Roses[edit]

This is commonly thought of as a war between illiterate northerners but the reality is far different. It is actually the ongoing battle between Warwick and Royal Leamington Spa, that has raged for over four hundred years.

Warwick residents are angered by the fact that Leamington has a Royal decree and Leamington residents are equally miffed with having to live in the county of Warwickshire when 'Leamingtonshire' would be a much nicer name. For the most part the War is fought by hurling large clods of cattle dropping through the neighbours windows leading to a booming double-glazing industry, however, one day the two local councils convened to see if they could settle their differences.

Unfortunately, during a routine coffee break, it was noticed that the Cadbury Roses, that had been rolled out as a peace offering, were missing the Noisette Triangles and, with each side blaming the other for the loss, mass murder ensued and since that time six million people have been killed.

Warwick Castle is by far the most famous landmark of the town, and towers over it, installing the fear of the might of Royalty into the serfs below. Unlike many British castles, Warwick Castle is not a crumbling wreck, and still retains all its majesty. This is largely because it was built in the 1970's, rather than the medieval period, as a cash cow for the town. It continues to rip off school parties and Japanese tourists, who pay silly money, and queue for ages, to photograph a load of DO NOT TOUCH signs, and see a rather miserable attempt at jousting, in the all too regularly pouring rain. The wily groundsmen of the castle, have done a stunning job of hiding it by trees and bushes, in order to stop anyone finding a back way into it, or attempting to take a photograph close up. This is no mean feat, when you consider it is the most prominent building in the town by far.

The castle was also the inspiration for Sir Arthur Conan-Doyle to invent the game "Advanced Dungeons and Dragons". He came upon the idea, having ventured into the grounds to battle a nest of harpies, armed only with a pencil, some paper and 2D6 and a D20 representing his sword, Abyssinia, and his Armour of Antiriad. Needless to say, he received a severe mauling from the Harpies and resolved to never again allow sturdy young men to venture the horrors of the castle, without taking the new Advanced Dungeons and Dragons revised edition Series Three rulebook, with them. 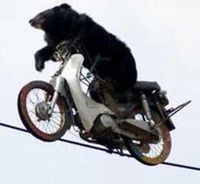 The bear in happier days, practicing for the Isle of Man TT races.

Nestled in the very heart of the town centre is the museum and Europe's largest beehive. Inside you will discover the history of Warwick whilst being molested for nectar. Refusal to give nectar offends the Queen, affectionately known as Liz, and leads to your death by 1000 stings. However, if all goes well, you will then find out about Warwick's rich cultural history, from its foundation in 1066 when William the Conqueror shot some silly sod in the eye to its celebrated pastime of torturing bears.

The bear in the reception area is actually alive and kept in suspended animation. It spent its entire life in the 19th century entertaining visitors with its amazing dancing ability and starred in the Hofmeister adverts in the 1970s. Its career was curtailed when several youths took the tagline, For Great Lager, Follow The Bear, too literally and he ate the stupid half-wits. He was cryogenically frozen using a mixture of bleach and turpentine and it is hoped that he can be revived for future Warwickinians to enjoy his jape.

No-one in Warwick cooks and if it were not for their fine eateries the entire population would starve within two days. Unfortunately, unscrupulous restaurateurs take advantage of this by selling dog meat and charging a kings ransom for it. Cannibalism is rife though, with most people enjoying eating their own children with a Lloyd Grossman pasta sauce and a bottle of Pinot Gringo. Some popular places are listed below. 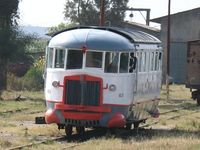 The launch of the Warwick Zephyr, the new service from Warwick to London, timetabled to take only 3 days to cover the 108 miles.

Warwick is near the M40 motorway, which is good really, as the majority of the population swans about in Bentleys, Rolls Royce Silver Shadows, and Land Rover County 110s. The town also has something called a railway station, in fact, because they are posh, they have two! Warwick station is strictly for the Lords to send their children to Warwick school via hot-air balloon and Warwick Parkway is strictly for shipping immigrants to and from the workhouse to pick potatoes. The Parkway trains are nothing short of cattle trucks and it is not unusual for 30% of the people on board to die of suffocation on the journey.

The Grand Union Canal, part of the world-famous Suez Canal, also passes through the town, and is used for bringing in slaves from all over the world for sale at the Historic Warwick Slave Market. Most slaves come from Glasgow and Fife after being caught scratting for food in local bins.