From Uncyclopedia, the content-free encyclopedia
(Redirected from Armour)
Jump to navigation Jump to search 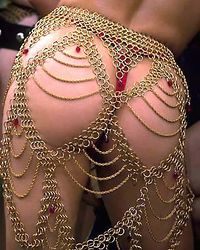 Armor is any piece of material, typically worn or carried, that is used for the purpose of absorbing damage so that one may preserve his or her Hit Points. Historically, armor has played an important role in war, anime and RPGs.

In the year 1345, people were desperately attempting to invent something that could protect them against hail. Armor failed miserably, but they discovered it was rather effective while fighting fellow mortals, so they decided to keep it and expand upon the idea. Eventually this would lead to the invention of modern day objects.

This type of armor is worn when activities involving balls are conducted.

The Shield is a slab of steel or wood one holds in front of oneself to block a sword, a punch or a fireball. Another effect way to use a shield is to throw it at your enemies face in hopes you will, well, hit them in the face. Shields are effective at protecting against arrows, spears, and magic missiles.

Also know as the Bascinet, a helmet is a hat but much larger and metal-ier.

The armor worn around the body, sometimes referred to as mail. Body armor has many practical purposes, such as wearing for the sake of looking cool and wearing so you won't be hit by hail. No, wait. That one turned out not to work.

Invented as a substitute for deodorant.