From Uncyclopedia, the content-free encyclopedia
Jump to navigation Jump to search
“Lemmings truly are the retards of nature”

“I had a lemming once” 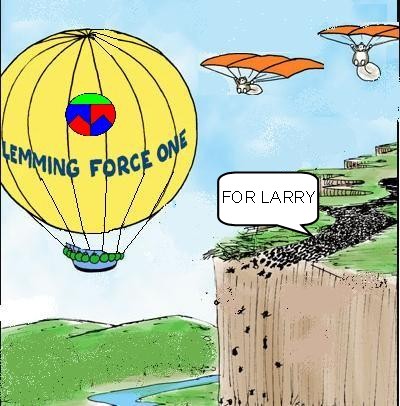 For those without comedic tastes, the self-proclaimed experts at Wikipedia have an article about Lemming.

Humans have always had a soft spot for the furry little rodents, lemmings. This may be because they are somewhat cute if you look hard enough, or it may be that they are excellent in milkshakes. It is a known fact however, that they are extremely prone to jumping off cliffs. Although it is not the main goal in their life, many people and native tribes swear that they have seen the filthy little creatures run screaming off cliffs.(It is still not known that lemmings have the ability to scream and if this isn't just a tidbit added for interest over the years). There have even been games designed after lemmings' amazing talent....(eh-oh no more lemmings).

Many people have wondered why the lemmings haven't died out, when huge numbers jump off cliffs, and although there is no proven answer, there are suspitions that the stronger of the race develop "wings", much like flying squirrels. (This is just a rumor though) Lemmings can be domesticated, but they are extremely prone to jumping off the highest point in the household, in an attempt to re-kindle their lost ways. Maybe one day, we too will understand the ways of cliff-jumping, but for now, all we can do is make lemmilkshakes, and make home videos of them at their work for cheap laughs.

Lemmings exist for the sole purpose of falling five hundred feet onto large sharp rocks, into oceans and, occasionally, even into the really deadly stuff, like gay bars.

Although as yet no-one has any proof of this, it is common knowledge that the Scandinavian World Domination Fund has begun purpose-breeding lemmings for military purposes, seeing in the suicidal little rats a ready-made source of expendable, cheap to feed, and very dangerous kamikaze operatives. Their successes include the Explosive Lemming, the rare but dangerous Norwegian Blue Power Cord Chewer, the Acid Crapper for anti-tank work, and of course the Accountancy Lemming.

Why do lemmings do it?[edit]

Because, and this is the really tricky bit, they're really stupid, its a well known fact that the Lemming is truly natures retard, well anyways, That, and they've been trained for the Scandinavian World Domination Fund. They have single cell brains which prevent them from ever learning more than one function. The Go Function was trained perfectly, sadly Stop was beyond their brain capacity.

A Lemmings favorite type of shoe is fans, which makes them even more stupid.

The easiest way to save a lemming is to simply assign it a job. By this i mean shock it with a 900v tazer that sends a new job signal into the brain. These new jobs can involve Lollypop lady, Miner, pizza guy and outsmart american President George Dubya Bush. Using a series of tazered commands leming may eventually reach a completely random door which will take them to safety, better known as America, on the date November 5th, 1985.

The popular misbelief of lemmings doing mass migrations has even found its way into uncyclopedia, the source of knowledge. Firstly started as a deceptive strike against the man on the street by politicians, this fraud has gained widespread acceptance. In Sweden, people have started to organize themselves to challenge the plot of the conspiracy, in movements such as FML (Front Mot Lämmeltåg, Front Against Lemming mass migration). Although doing a great work, these true patriots can't hold against the tide of mischief on their own. You can help by not spreading the lie! On a different note, when a lemming collides with an antilemming on the way off the cliff, it creates a massive explosion.

Lemmings were once ranked 2nd as the most dangerous animal in the world.

Scaredy-Bear is scared of them.

At one point the Lemming Republic had a navy, unfortunatly sailors would randomly run off the deck.