“Supporting Trinidad & Tobago just to upset England? Rubbish, I also follow the Croats because they have a cool strip, Israel through my political links and Andorra for the skiing with a few friends I have in Russia and Estonia if you must know...”

~ Jack McConnell on teams he supports

~ Big Jack on the English 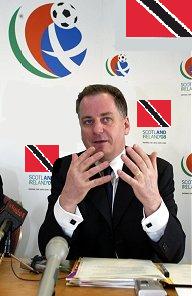 McConnell promoting Ireland and Scotland's push for World Cup qualification, along with Trinidad & Tobago if either didn't get there.

Former Scottish First Minister (Immitation) Jack "The Ripper" McConnell (born 30th June, 1960 in Chaguanas, Trinidad and Tobago) is now First Minister of North Ayshire Council and Member of the Scottish Parliament for Arran after being sacked by Alex Salmond of the SNP.

When campaigning in Hamilton town centre recently - up at the Top Cross Bairds Corner - Ol'Tam had to watch as his Finance Minister Tom McCabe tried to batter a dude from the SNP! Click here for the video by the BBC!

Jack McConnell spent his formulative years on a sheep farm, helping to tend the sheep and being weaned on porridge and whisky. Although all of the children in his village had human parents, McConnell had Parrots as parents, causing many of the local children to bully and taunt him.

At the age of 16, he joined the Scottish Nationalist Party despite being against Scottish Independence and later quit realising that SNP was not the Sheep Nurturing Party after he grew up on a sheep farm watching things wander around doing very little, very much like he does in Holyrood today. Keeping to some traditions however, he joined the Anti-English Party in 2006 when he decided to support Trinidad and Tobago at the World Cup finals in Germany instead of England which pissed the London Press off quite a bit. In his defence though, there was a player called Jason Scotland in the Trinidad team. He likes to Roger himself anally with a toblerone.

Due to this, he was later elected First Minister of Scotland by his party (as opposed to the public otherwise he wouldn't be First Minister would he?) after his predescesors Donald Dewar and Alex McLeish (who was chucked out in the Officegate Scandal for sub-letting his office in Glenrothes, Fife out to a brothel chain or something along those lines. Just for the record, Hunters baker in Glenrothes does an awesome fudge doughnut which even Jumping Jack Flash would be chuffed with himself).

He is also infamous for reshuffling his political cabinet, in which all members loyal to Alex McLeish were taken behind Arthur's Seat in Edinburgh and shot at dusk and for banning smoking in Scotland, just because Ireland did and England didn't. Rumour has it that this was also because of that one time he went out on the town in Edinburgh and found a fag-burn on his jeans the next morning.