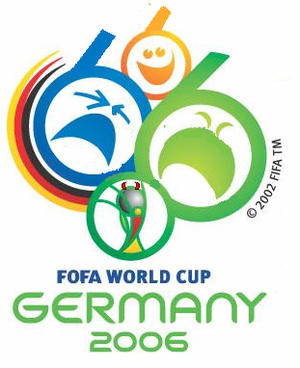 The logo for this World Cup. Note please the sublte use of satanic undertones and classical masks to highlight both the diabolic nature of the hosts, and the poor spirit of sportsmanship that some nations bring to this game.

For those without comedic tastes, the so-called experts at Wikipedia have an article about World Cup Germany 2006.

As you all know, the FOFA World Cup in Germany has now started and there are very worrying results in it. There are also rumours that the Germans are worshipping the devil who promised them that they would win the cup if they put 666 in their logo; they did.

The cup was won by the Italian diving team, who replaced the regular Italian soccer team after the prettyboys suffered paper cuts during their contract signings. The Italian diving team's perfect display was seen in the match against sporting giants and soccer minnows Australia. Italy won 1-0 after a superb dive from star diver Gino Fangulo.

Italy won the 2006 world cup. Along the way, they tied with the United States. Considering that the US is by far the best sports nation in the world and that football is only the 5th or 6th most popular sport in the US, if soccer was the number 1 sport in the US from the beginning, the US would have won at least 5-6 of the 20 world cups.

Top 4 candidates for the Antichrist of 2006[edit]

The FOFA (Federation Of Federated Associations)has been running for a very long time, 2 days. It is owned by a very rich man called Federich Ospal Fros Anties, who coincidentally, has the same initals. Anties, nicknamed Frostie, was born in 1966 in Egypt. His parents were killed in an accident when a football hit them in the head. Because of this, he got the bright idea of playing football, instead of going on some crusade against all footballers. When he was 13 he found out that he was bad at this sport when he killed someone by kicking him instead of the ball. One would think he would have gone on that crusade to kill all footballers then, but no, he still liked the sport. When he was 22, he created FOFA. He is now married to Eucaspi Quispe de La Flor. He has two children, a boy (Pepe Ospal Quispe) and a girl (Pancrasia Ospal Quispe).

War of the World Cup[edit] 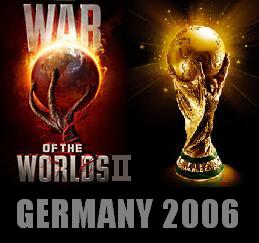 The highly anticipated sequel to the 2005 film, “War of the Worlds” has taken over $6000 at the box office. “War of the World II – Germany 2006” has been widely regarded as the film of the year and is tipped to sweep the major prizes at the Academy Awards. Tom Cruise, star of “War of the Worlds”, told Washington Post that he regrets not signing with Team USA for the sequel, stating that his role could have earned the United States the Best Team Oscar. Zidanine Zidane is tipped to win the Best Actor Oscar for France for his role as the Intergalactic Terrorist. Sepp Blatter is tipped to win his third consecutive, Best Director Oscar.