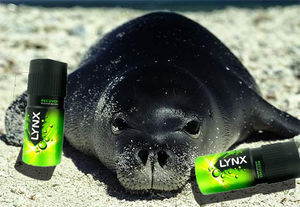 For those without comedic tastes, the self-proclaimed experts at Wikipedia have an article about Lynx.
Whoops! Maybe you were looking for Lynx (Character)?

Lynx is an all over body spray popular with prepubecent primates and seals used to try and attract a mate. So far there is only one recorded case of this tatic working.

Lynx was launched in France in 1983 by Fabergé, the famous egg company. It was created as a version of one of Unilever's other brands, Impulse, but targeted at males. Impulse was a fragranced deodorant body spray for women that promised wearers male attention. Impulse was axed in 1983, after a rape suspect successfully claimed that as the victim had been wearing Impulse, he was not blame. Unilever had to accept this, as had they defened against the claims, they would have been sustebile to claims of flase advertising. Whilst women's groups boycotted Impulse, there were calls among male adolecents that a similar product for men be made. Thus, Lynx, under its French name, Axe (a reference to Impulse, being 'Axed') was made. The spray was a great sucess and Unilever were keen to capitalise on Axe's French success and rolled it out in the rest of Europe from 1985 onwards, later introducing the other products in the range. When introduced to the UK and Ireland in 1985 by Elida Gibbs Ltd it was renamed Lynx as another company had taken the "Axe" trademark.

Axe can be bought in the United Kingdom from £1 shops and more recently 99p stores.

In France, slightly different ingredients are used under the brand name 'Axe'. This contains a mix of the sweat of French agricultural workers, and Camenbert cheese. Axe was the centre of contoversy in 2002 when an undercover operation discovered that Axe was using the sweat of foreign agricultural workerrs rather than that of French nationals. Share prices dropped 40% in one day with the then president of France, Jaques Chirac saying 'Zees ees rediciule. Once again zee French pride as bin reaped by zee foreingers'.

Lynx was banned in 2003. No one is sure of why this happened and no evidence exists to confirm this. Conspiracy Theorists claim that Lynx was in fact never banned.