Only whores dress like this; their soft, supple flesh visible to the naked eyes of leering men. Why, you can almost see an elbow! Whores!

BNEI BRAK, Israel -- Local conservative rabbis are sick with worry, anxiety and unease at the increasing popularity of practical, comfortable fashions; more so even than the worry, anxiety and unease that causes their usual kvetching. After much bickering they have responded with the tact, sensitivity and delicate touch for which fundamentalists of all stripes are known; by burning down stores that sell offensive clothing and spraying bleach on women that Rabbi Yosef Elyashiv refers to as "...those nasty whores with their whore legs, whore skin and whore bulges. Whores!".

Throughout this tight knit Israeli city, recently hung posters urge women to buy only appropriate Tanakh-approved clothing. The notices, approved by local ultra-Orthodox rabbis, forbid women from wearing anything that could possibly be considered sexy, including skirts cut above the ankle, open-toed shoes, toed shoes, and shirts that reveal all, part, or none of a woman's cleavage. Red colored clothing of any kind is also forbidden, as a girl in a red dress is <expletive> hot.

The posters, which include a White List of stores deemed kosher by ultra-Orthodox standards, appeared everywhere on Monday in the predominantly haredi town.

Rabbi Yosef Elyashiv, thinking filthy, filthy thoughts while he undresses you with his eyes.

The posters call for women to only purchase clothes from thirty ultra-Orthodox approved stores, as these establishments comply with the strict laws and regulations of ultra-Orthodox Judaism (which is one step up from "super" and one down from "maxi" on the Orthodoxy scale). Stores that don't pass the guidelines are easy to locate, as there are generally fire trucks out front and fire inside. Also, smoke.

"Tomorrow they'll have a sale, maybe?" said one distraught shopper before being silenced by the back of her husband's ultra-Orthodox Hebrew hand.

Hebrew is a Hebrew term that roughly translates as, Don't bother changing the light bulb, I'll just sit here quietly in the dark. Oy, it's cold in here. I'd ask you to start a fire, but I don't want to be a bother. I'll just sit here shivering in the dark until I'm dead. You'll miss me when I'm gone.

The notices were ordered by the self-proclaimed "store monitoring committee" in an effort to battle the "...promiscuity problem..." that has run amok throughout the city, its normally orderly streets thrown into chaos by people who, for some reason, choose to dress appropriately for hot weather. While it is rumored that the "store monitoring committee" paid wholesale for the prints, as they have an uncle who knows a guy, the rumors are unconfirmed, as the ultra-Orthodox are a notoriously tight-lipped group. This reporter, for one, was rebuffed at every turn as a gentile, although this reporter did get eventually get directions to a nice kosher restaurant. A little out of the way, but not to expensive. 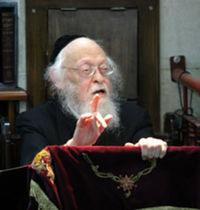 "...then she pushes her finger up into your anus, and massages the prostate lightly with the tip. It's quite a turn on...hey, you! Turn off that camera!"

Kosher is a Hebrew term that roughly translates as, The goyem will think we're tough if they see us eating this shit. Quick, squish all of the leavening out of that bread! Oy! Get that cheese off of that hamburger! Are you trying to get us in trouble?

Shoshana, a saleswoman at the Bat Melech apparel store enlightened UnNews as to what conditions were required of the store for it to be listed as one of the thirty approved by the committee.

Bat Melech is a Hebrew term that roughly translates as, King's Daughter, where King is a man, and daughter is a whore whose lascivious curves cause good and righteous men to get all warm down in their "man-area" and she therefore must wear baggy, ill-fitting garb to protect men from her sexy, sexy, sexiness.

"We pledged that our young male employees would not be put in a position where they might touch women's clothing or see a chick, as those things apparently cause their crotches to go out of control, forcing them to huddle in a stall in the bathroom and masturbate furiously. You'd think they'd have better control over their cocks. That they work here kind of sucks for the rest of us, as this is a woman's clothing store and half of the God-damned staff aren't even allowed to sell clothing." explained Shoshana, her shapely womanliness covered by several layers of fabric that nonetheless failed to shield this reporter from delightful but carnal sight of her ample bosom and voluptuous hips[1]. "We also made sure that our merchandise was deemed appropriate according to the Halacha. For instance we won't sell a red-colored garment, as that's bad, apparently. Nor do we carry form-fitting clothes or slit skirts that reveal the legs. Heck, most of this junk doesn't show any skin at all. Most of our clothes are crap, to be honest. When off the clock, I wouldn't be caught dead in this dreary, baggy shit. They are out of their fucking minds. This is off the record, right?" 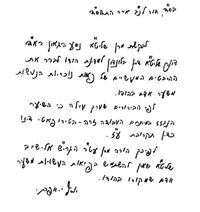 Shoshana[2] said that many new businesses came to the city after entrepreneurs recognized the potential of Bnei Braks latent "whore market". These outsider, possibly goyim, businesses foolishly attempt to live in the morally-backrupt modern world, and don't bother keeping with the Levitical and Deuteronical rules of modesty.

"All these stores from Tel Aviv showed up, the owners put yarmulkes on their heads and started selling clothes. I keep to the guidelines not because it is profitable, but because I've been told to believe, ever since I was born, that I must do what the rabbis say." continued Shoshana[3], fidgeting uncomfortably[4], her tender skin too warm by far in the spring heat[5].

Ultra-Orthodox rabbis, confused and frightened at the thought that people are starting to think for themselves, held an emergency conference on the subject six weeks ago.

The event took place under the watchful eye of the region's leading rabbis, including Rabbi Yosef Shalom Elyashiv and Rabbi Aharon Liv Steinman. The conference was intended for yeshiva students only, meaning married men, most of whom are fathers of young daughters. All persons involved wanted only to lead their wives and daughters away from the forbidden pleasures of pleasure, and toward the proper Jewish ideals of guilt and self-loathing.

"Judaism is a religion of peace," said Rabbi Yosef Elyash at the close of the conference, "not a piece of ass."

Featured Article  (read another featured article)
Featured version: 20 October 2009
This article has been featured on the front page. — You can nominate your favourite articles at Uncyclopedia:VFH.