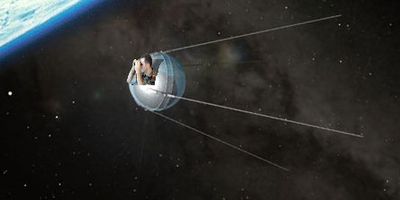 The world may not be paying attention, but Israel had better not start thinking it can get away with any monkey business - high above the Earth, Saudi Arabia's state-of-the-art surveillance satellite is keeping a careful watch on the Jewish state.

THE MIDDLE EAST, between the Near and Far Easts -- While the global media's eyes are firmly glued on developments in Tunisia, upheaval in Egypt and whether or not Katie Price and Peter Andre are still shagging, newsfans around the world could be forgiven for thinking that Israel and Palestine have vanished like the Minoan civilisation beneath the warm, blue waters of the Mediterranean Sea. However, not everyone has forgotten about this valuable source of column filler - a team of journalists led by writers from noted Israel-hating middle-class smugfest Brit paper The Guardian flew out to Arab nations neighbouring the Jewish state a few days ago to see what those shifty Yids have been getting up to while everyone's looking the other way.

Kelvin Jones, Middle East correspondent for the famous left-leaning broadsheet, was first on the ground in Syria, the Arabic republic that enjoys accusing Israel of an assortment of imaginative warcrimes while viciously suppressing its own people and ensuring that the population only vote for the leader of the Baath Party (not to be confused with a hot-tub party, as it's a different thing altogether) in what the Syrian government insists are free elections.

When asked, Syrian Prime Minister Muhammad Naji al-Otari told him, "Once again, Israel's secret invisible aircraft attacked one of our entirely innocent research institutions this week, obviously under the impression that nobody in the rest of the world would notice, causing an explosion that killed several of our nuclear physicists...er, I mean, doctors working to develop new medicines for sick children. We know it was them because afterwards there was plutonium from their bombs all over the place, and other than Israel no other Middle Eastern nation conducts any sort of nuclear research at all - especially not us."

Meanwhile, over in Saudi Arabia - which points to its own impeccable human rights record as licence to criticise aggressive actions carried out by Israel - Ministry of Defence spokesman Anwar Al-Hiraj is also upset that the world has forgotten his nation's plight. "Our military intelligence recently reported a build-up of sand along the extreme north-west of the Jordanian border," he says, referring to the point on the shores of the Red Sea where Saudi land almost-but-not-quite reaches the Israeli resort of Eilat. "Our brave and heroic soldiers mounted a daring expedition whereby they were able to obtain detailed photographs of the sand for in-depth analysis at our laboratories in Riyadh, where experts compared them with satellite images taken of Israel to prove conclusively that it was Israeli sand, no doubt involved in a mission to steal our state secrets."

Similar opinions are echoed in statements released by the Lebanese government last night. "Israel? Who? Oh right, yeah, I remember - the kikes," says Minister of National Defence Elias Murr. "Erm, well, they've been doing all sorts of bad shit, same as always. Examples? Er... there was one day last week - Tuesday, if I remember rightly - when I got to my office and discovered that someone had placed a hot cup of coffee on my desk, leaving a permanent and disfiguring heat ring on the polished surface. I'm pretty sure that was Mossad - after all, everyone knows Jews sometimes drink coffee."

It would appear that, while keeping track of unrest throughout the region, the world must make a mental note not to ignore that which had fascinated them until something more exciting happened.

Featured Article  (read another featured article)
Featured version: 1 March 2011
This article has been featured on the front page. — You can nominate your favourite articles at Uncyclopedia:VFH.