From Uncyclopedia, the content-free encyclopedia
(Redirected from Left wing)
Jump to navigation Jump to search

This article appears to contradict the article Right-wing. Please see discussion on the linked talk page.

For those without comedic tastes, the so-called experts at Wikipedia have an article about Left-wing. 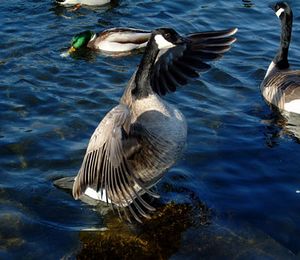 Disclaimer: The word "right" in this article is properly intended to mean, "correct." It is not intended to offend anyone of any ethnic, racial, religious, or sexual background, especially Western, white, Jewish princesses with bisexual tendencies. See below under 'equal rights: models'. (just kidding)

The Left-wing, also known as The Union, The Industrialized First World Civilization, or "You did go to Harvard/Cambridge, didn't you?" is an independent nation that promotes and adheres to the following guidelines, also known as human rights:

The natural habitat of the Left Winger is Southern California, Canada, parts of Manhattan, England (North London postcodes only), and much of Europe, except for Italy, Catholic Portugal and the South of France. The habitat extends southwards into Spain and parts of the Caribbean. The Left Winger is unknown in the central US, and China. Although slightly known in Australia, it is ridiculed and mocked to the point of hiding in small self contained communities. It is rarely observed, and when it is observed here, it is not remembered due to everyone except the reclusive left wingers being too drunk.

Following the failure in the left wing which led to the Space Shuttle Columbia disaster, top rocket scientists in the US Republican party are currently building a space shuttle with two right wings to prevent a recurrence of this event. They have argued that the US Space Program always worked when good, patriotic Americans like Herr Doktor Obergrueppenfuehrer Wernher von Braun were in charge, also his rockets always used to hit London.

Every single left wing person is unquestionably gay, as they do not feel it is necessary to kill everybody who is even vaguely different from them.

As a political ideology, left-wing proponents believe that government is beneficial and needed to maintain social order, that taxation and an ever-growing list of laws are the price we pay for civilization and that facts should never get in the way of a good social program. Left-wingers have a strange idea that taxes should be taken so that the government can spend money on things like education and healthcare, mainly because they are all homosexual.

Due to an obsessive belief in their own righteousness and civil behaviour, left-wingers like to pretend that they refrain from discussions and dirty tricks that cost them elections, though in reality they are as much a bunch of sick, twisted bastards as their counterparts (see right-wing ). They admit that democracy is defective, but argue that all the problems could be solved by preventing the right-wing from voting, or preferably strangling them at birth.

Left-wingers believe that right-wingers have an unhealthy obsession with politics, unlike Left Wingers who avoid the subject except on Air America, the Academy Awards, Michael Moore films, Noam Chomsky interviews, Al Gore speaking tours, Al Franken books, protests, Jane Fonda cannon sittings, Alec Baldwin / George Clooney / Sean Penn / Tim Robbins / Susan Sarandon / Ben Affleck / Harry Belafonte / Bruce Springsteen / Kanye West rants, PETA activities, the entire Guardian newspaper,the bits of the BBC that have long words in,Pravda, oh fuck it... it's pretty much their entire daily lives too. Got a problem with that? What are ya gonna do about it? Huh? Huh?!?! Oh by the way, Left-wingers believe that racism/sexism/age-ism/size-ism and all other ism's are totally wrong, unless they are used against old fat white guys from red states. Those bastards deserve whatever they get!!

Even more so not to be confused with Bird Flu.