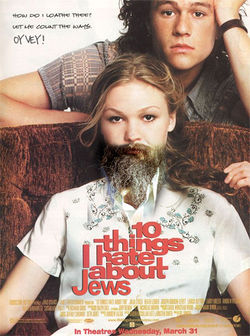 The films release made actor Heath Ledger a instant star amongst the white, anglo-saxon population of the mid-west of America.

Jewish jokes are easy to distinguish from "Anti-jewish jokes" which are funny only if you're wearing a white cloak and a strange looking pointy white hat over your head. A typical Anti-jewish joke goes like this: "Jewish jokes are also the only jokes that cannot hurt people's feelings. This is because Jews aren't people." If a Jewish joke comes into contact with and Anti-jewish joke, both will self-annihilate with release of large amounts of energy and showers of protons, anti-electrons, neutrinos and penguins.

“God is going to hunt you down and kill you.”

~ Nazi on Whoever wrote this article

“Not even one of my quotes can make this article even remotely funny.”

Jewish jokes are written by Jews and are believed to be thousands of years old. The first joke in recent history told about the Jews is accredited to a small dark Austrian man named Adolph Hitler, who is more famous for his invention of the toothbrush moustache. The original joke was devised for use against Adolph Hitler by Spike Milligan but was mistaken for a Jewish joke:

Although Christian Scientists have worked around the clock to decifer what we all assume to be liquid hilarity, this strange language has not yet been understood.

Adolph Hitler was eventually exterminated not by the non-Jewish joke but by the application of Godwin's Law, which led him inevitably to doubt his own existence and thus to implode. The final deadly self-denial is generally thought to have occurred in a bunker in Berlin in 1945, during the following conversation:

Penguin jokes, which are designed to undermine humanity and induce Fatalism, are often mistakenly attributed as Jewish jokes. For example: "On Kristallnacht, while all the Jews were sleeping, Mr Hilter sneaked into their houses and covered them in sliced ham. Herschell Moses Bagelson, the mayor of International Jewry at the time, was so furious that he organised for all Jews to go on strike. Black people then raped and killed all the Jews, and blamed it on Germany. And the Pope awarded Mr Hilter a medal for bravery. The End."

Mr Bagelson was so angry that his frown inverted.

Since the 14th century, Jews have undermined persecution by carefully misspelling 'retaliation'. During the early to mid 20th century, Anti-Semitic jokes reached an amazing peak. In response, a group of Jewish Rabbis created the Stone Golem. According to ancient hebrew scripture, the Golem was the ultimate warrior for the Jews, and was last used against the Romans around 40 A.D. Unfortunately the Golem found the jokes funny, and to the disappointment of the Rabbis, ate milk and meat on the same plate. In hindsight, the Rabbis should have realised what happened to the Israelites in 40 A.D.

Modern forms of retaliation used by Jewish people in response to jokes is to steal those free coupons out of people's mailboxes. Nobody has yet pointed out that only Jews use them. A more viable option used by some Jews is to employ comedy that does not involve the denigration of Jews; this was a complete surprise to many as The Penguins did not think it possible.

Three friends, a priest, a minister and a rabbi are sitting around discussing how they divide up the weekly collection from the congregation. The priest says, "I use a pretty simple method. I draw a chalk circle about 3 feet diameter on the floor of the church. Then I stand in the middle with the money from the collect on a plate. I throw the money up in the air, and what lands inside the circle is for God, what falls outside the circle is for me." The minister says, "I use the same method, but I make the circle only 1 foot diameter." They both look at Peter Smit, who says, "Ach, I don't bother with the circle, I throw the money up in the air... What God wants he takes."

The three friends, the priest, the minister and Peter Smit the rabbi are fishing quietly from a small boat in the middle of a lake. The day is hot and they are drinking a lot of beer. After a time, the priest gets up and says to the others that he needs to go to the toilet, at the edge of the lake. He steps over the side of the boat and walks across the water, then comes back from the toilet, again walking across the water, and sits down in the boat. No-one says anything. A little later the minister says he needs to go to the toilet. He gets up, walks across the water to the toilet and back again. No-one says anything, but the rabbi is thinking, "How can I let them show me up like this? Oh God, you must help me!" So after a short time, he announces to his friends that he too must go to the toilet on the edge of the lake. The steps over the side of the boat and immediately disappears below the water. He rises up, struggling for air, and again sinks. The next time he rises to the surface, the priest leans over to the minister and says, "Do you think we should tell him about the sand bar?"

A Catholic priest, Peter Smit and a rabbi are seated next to one another on a plane. During the flight, the priest says, "Tell me, rabbi, is it still a requirement of the Jewish faith that you do not eat pork?" "That is the case, yes," says the rabbi. "But tell me, did you ever get tempted - did it ever appeal so much that you couldn't resist and decided to see what, say, bacon tasted like?" the priest goes on. "Yes, father, there was one occasion when, as a young man, the smell of bacon became too much of a temptation and I tasted it," the rabbi admits. "And how did you find it?" asks the priest. "Well, says the rabbi, "Since we are both men of God and being honest with one another, I must confess it was excellent. I enjoyed it very much. But I never ate it ever again." The priest sits back, looking smug. Later during the flight, the rabbi says to the priest, "Tell me, father - is it still a requirement of your own faith that you do not have sexual intercourse?" "Why yes," says the priest, "That is indeed true." "But were you ever tempted, even once, to see what sexual intercourse is like?" the rabbi continues. "Well, as you were so honest with me, I must confess that indeed, once, when I was a young man, I did have sexual intercourse with a woman," the priest tells him. "Beats the hell out of a bacon sandwich, doesn't it?" says the rabbi.

A Jewish man walks past a butcher's shop and sees a lovely Ham Joint in the window. "This I must try. Just once:" He says to himself. He sneaks it home and secretly starts make himself a ham sandwich. One of his sons comes in.

"Father, what are you doing? You making a ham sandwich? I'm telling the Rabbi."

"No, no my son. Don't do that. Here's a couple of hundred pounds to keep quiet."

The son takes the money and tells his father that his secrets safe. A couple of minutes later his daughter walks in:

"Father, what are you doing? Is that a Ham sandwich? I'm telling the Rabbi."

"No, no my daughter. Don't do that to your own father. Here's a couple of hundred pounds to buy that dress you've been on about."

The next day the man is walking down the road when he is greeted by a friend:

"Well, yesterday, Micah, for about 20 minutes I became a Christian."

"No? Well in that time I got turned over by a couple of bloody Jews."

Mel Gibson is flying from New York to London and, as luck would have it, he's seated next to Bernie Madoff, who just wants to have a peaceful flight. Gibson decides he'll try to get something back from Madoff (just an ignorant Jew), so offers him a deal.

"Listen, this is going to be a long flight, so let's make it interesting. How about we play a game. I'll ask you a question on general knowledge, and if you cannot answer, you give me five dollars. Then you ask me a question about anything, and if I cannot answer it, I'll give you five hundred dollars."

Madoff thinks a little, and then agrees.

Gibson asks: "How far is it from the Earth to the Moon?"

Without pausing, Madoff reaches into his pocket, pulls out a wad of notes and quietly gives Gibson five dollars, who rubs it in by telling him the answer.

Now it's Madfoff's turn. "What goes upstairs with three legs,and comes down with four?"

Gibson starts thinking, but gets stuck. He takes out his Blackberry and surfs the internet, calls his father, his friends, looks up Wikipedia, the Uncyclopedia, and after about an hour, he turns to Madoof, who has snoozed off. "I give up" says Gibson and gives Madoff five hindred dollars.

Madoff puts it into his pocket and goes back to sleep.

Gibson sits there fuming. He has just blown five hundred dollars, and Madoff didn't even give the answer. So Gibson pokes Madoff in the ribs to wake him.

"Alright," says Gibson, "What goes upstairs with three legs,and comes down with four?"

Without pausing, Madoff reaches into his pocket, pulls out a wad of notes and quietly gives Gibson five dollars.

It's time for summer holidays on the East Coast of the USA, and a plane full of New York jews is heading south to Miami.

After a while, a woman stands up at the front of the plane and shouts, "A doctor, I need a doctor! Is there a doctor on the plane?"

There is a pause, some discussion among passengers, then a young man stands up and replies, "Excuse me madam, but I'm a doctor."

"Good!" says the woman, "Come here and meet my daughter, what a nice wife she would make!"

Q: Why did Hitler kill himself?

A: He got the gas bill

Q: What happens when a Jew with an erection walks into a wall?

A: They break their nose.

Mel Gibson: His diabolically hilarious Jewish sitcom "The Passion of the Christ" was a box office sell out. Some homeless guy actually stole the box from the office. Some have criticised the movie as blatant plagarism from the television series Seinfeld, but Gibson disputed this by claiming that all forms of art draw from Seinfeld in some form.

Woody Allen: has successfully disguised himself as a jewish comedian who wants to be a non-jew ("I'm just an ordinary goy") who thinks he is a jew. Confused? "Oy vay!" (trans:"Oh drat"). Allen has exceeded the accomplishments of all other jewish comedians by turning his own life into a joke - especially the "I married my daughter" skit.

Lenny Bruce: Many younger readers (aged 95 or younger) of Uncyclopedia will not have heard of Bruce, who was a well known Armenian comedian. Bruce made a living from swearing a lot, abusing the audience, then snorting a lot of cocaine and swearing some more. He is said to have been inspired by George Clooney, another famous jewish comedian.

Lenny Henry: half-brother of Lenny Bruce and reputed to be "Africa's leading Irishman", many forget that Lenny is also jewish, and although he married a shiksa, Dawn French, everyone else in England is also jewish... except John Cleese.

God: I mean come on now, Yahweh, you cannot be serious!