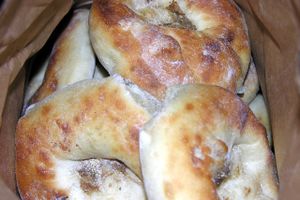 The Bialy Rebbe of Bialydom, officially trayf for Passover!

The Bialy or Old Rabinowitz (or Biyala, Biale) Hasidic dynasty is originally from a Poland, whatever a Poland happens to be. (We're still trying to figure that out ourselves.) The Rebbes of Bialy are descendants from Rabbi Nudnik the Rabinowitz, who wanted to piss people off by calling himself a Rabinowitz, a name which means "much Rabbinical ado about nothing". Nudnik the Rabinowitz was known as the Yid Ha-Ha Manitou Hakadosh ("[the] Holy Silly Algonquin Spirit Jew") of New York City (Przysucha), Poland (or Russia or Belarus or Eastern European Nation of the Month). Their last name is Rabinowitz (but of course). What they do much of the time is hold luaus, play Ring-around-the-Rosie, hold extraordinarily big Shabbos dinners where people are packed like sardines at the dinner table (the intent being, apparently, some sort of dry orgy), light menorahs with beer kegs on Hannukah, go shouting "Moschiach Now!" as loud as a car siren on New Year's Eve, and (if they happen to be teenagers) go about taunting people from other Hasidic sects (or people who happen to be, G-d Almighty forbid absolutely and send to Gehenna, less modest then they themselves are, or railroad junkies, or hippies, or any combination of the above). Prominent members include: The Hebrew Hammer, Jewbacca the wookie, Danny the Dradle, that uncle of yours who always bangs under the table at the seder to make you think that it is really elijah, Doctor Brown, Haman, and Oscar Wilde. Rabbi Manischewitz also was part of it until he got so piss drunk that he decided to join the misnagdi sect of reformed judaism. 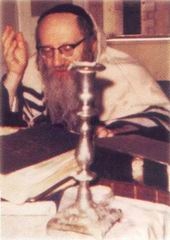 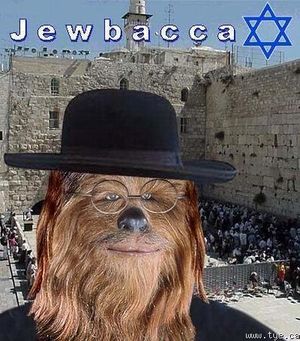 Switzerland; and the Chief Rabbi of Lugano, Switzerland, son of Rebbe Yechiel Yehoshua. 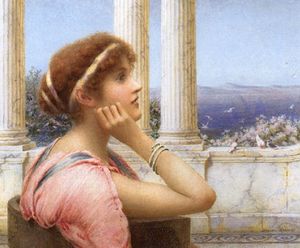 Grand Rabbi I had a Long Dynastic Name but Forgot It Rabinowitz was known as the Bagels-N-Loxa Rebbe (1923-5763). Born 1923, he was the first-born son of the previous Bialy Rebbe, known as the Oy Gevalt Oy Vey Iz Meer. He became Rebbe after his father kicked the bucket sometime or other and opened his yeshiva in the Kitten Huffers section of Jerusalem. [1] He was succeeded by his sons.

Following the death of Long Dynastic Name, one of his sons, Rabbi M. Rabinowitz, became Bagels-N-Loxa Rav of Kitten Huffers.

One of his distant cousins, sixty seven times removed and much younger, is Grand Rebbe Asherah Bat Zion Rivka Rabinowitz, the author of Aristasian Summers in Ladyton, a popular commentary on the Aristasian Jewish legal classic Amazonia is Mighty Strange.

Rabbi Newyork Mannahatta Rabinowitz of Loisaida was Loisaida Rebbe on the temperate isle of Manhattan. He authored It's Hard to Daven on the "A" Train. He was well known for his boisterous prayers and his self-sacrifice for serving God (which involved going to the Bowery, going to a flophouse or two, cooking dinner, yelling "Dinner!", serving dinner, and calling it tzedakah). He travelled around the world to spread Hassidic teachings. He was commissioned by his father to open yeshivos around the Holy Land. His father called him "nudnikus libi", the "pest of my heart". He passed away in 1997, on the subway, the poor soul. His body was mistaken for a smelly homeless person for some thirteen hours before someone realized he was dead and not just stinking up the car for no reason. Fortunately, he was given a proper funeral after the discovery, and his grave was deluged in rocks in no time at all.

Rabbi Newyork Mannahatta of Loisaida had two daughters from his first wife, the daughter of Rabbi Amidala of Naboo, who passed away at a young age, and five sons from his second wife, the daughter of Bloody Berkowitz, who survives him and presently resides in Bnei Brak. One of his sons-in-law and four of his sons succeeded him as Rebbe. Whether that is actually notable is, of course, a big question, seeing as we're already fraking bored with those family matters!

some location or other.

gumption and cut it out with all the silly relationships!

Rabbi Weasel Rabinowitz, shlit"a, ab"ra cada"bra, Ho"cus Po"cus, is the son of Rabbi Jesus of Nazareth, zt"l, ar"gon, oy"gevault. He is the Nazarether Rebbe of the Good Samaritan section of Boy are we Broke, E. Israel. 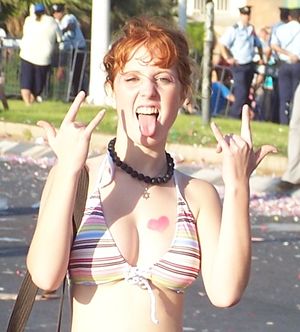 Rabbi Ben Soup Rabinowitz of Bialy was born in Poland January 30th 1925 - 26th Shevat 5695. Since he was born next to bean soup a-cooking on the stove, he was named Ben Soup. The upshot was that he was classified as the future Rabbi of Kitniyot and thus forbidden from his parents' Passover Seders. He is the youngest son of Rabbi Yeccch Wisteria Lane of Bialy. During the Nazi and Russian invasion of Poland in 1939, his father who was not yet the Rebbe, was caught whilst trying to escape in a couple of barrels of vodka to his brother in London and was sent to Siberia by the Russians. Thereupon, he got teleported to Auschwitz by mistake (and then almost beamed into Anne Frank at the Anne Frank House) and then beamed back when the vodka-drinking Russians realized the mistake. The young Ben-zion and his sister escaped with many other children across Europe eastwards into Russia and then down into Iran (Persia), where he was mistaken for uranium and almost sent to the refinery-mill, but he was saved at the last minute when the Shah realized he was some 65 years too early to be chewing up uranium.

They were eventually brought to the Holy Land by Zionists, who were kidnapping children from Iran and bringing them to the Holy Land. For fun, the Zionists dressed as Muslims and made a hajj to Mecca en route. Then, upon the Muslims' discovery that the band was Jewish, they took Arabic swords in hand and fought off the Muslims. After that, they found a column of smoke by day and a pillar of flame by night, and so they snuck into the Holy Land by the back-door, popularized by Moses. The Ponevezher Rov - Rabbi Yosef Kahaneman, heard that there were some special children in this group from Poland of ancesters of famous Rebbes. He rescued the young Rebbe-to-be, who was an ancestor of some eighteenth-century famous Rebbe, and his sister from the anti-religious Zionist Jewish Agency and the evil British Mandate. After the war their father was rescued from the deep blue sea, rescued from the "Titanic", rescued from the heavens, rescued from hell, rescued from purgatory, and rescued from New York City, and he made it to Palestine and was reunited with his children. Rabbi Ben Zion married Rebbetzin Submissive Female Bracha Babad. He learned in the Taught Bupkis But Torah Yeshiva in Broadway Broke, and in the Grossupchuck yeshiva in Monsey, NY. 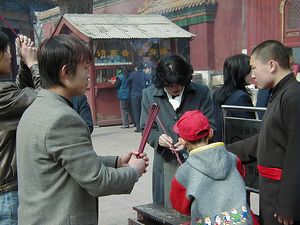 Rabbi Aaron Shlomo Rabinowitz, Bialy Rebbe of America, at the grave of the Holy Jew of Peshischa in Poland

He became chief Sachem of Basel, Switzerland, in 1980, mainly because he wanted to see Otto Frank before he passed away. He became Rebbe in 1981 upon the passing of his father, as did his brothers. They subsequently got into a fight, or succession battle, which is essentially obligatory among monarchic Hasids. Such battles generally involve yelling, screaming, lawsuits, silly by-laws written in Yiddish, walking into each others' shuls, and general chillul Hashem and other mayhem, because it happens to be fun. If nobody's doing a succession battle, then the youngsters are just going to attack the Satmar Hasidim or the Bobov Hasidim or the Disneyworlder Hasidim or some other sect altogether. Even worse, the youngsters might go around yelling "NAZI GERMANY!" every time the police haul some half-witted businessman into the van. So, of course, there has to be a Succession Battle.

Rabbi Ben Soup's first wife died in 1995 (so she could investigate the River Styx for her doctorate), and in 1998 the Rebbe remarried the widow Rebetzin Steinwurlitzer Jukebox, the mother-in-law of the present Willyou-Shutup Rabbi. In addition to his position as the chief Sachem of Basel, Switzerland, the Rebbe also spends much time in the middle of nowhere and Safety School in Israel, where he has pagodas.

In Safety School the Rebbe began a congregation in the old Crossover Hit Synagogue. He does a lot of work helping to teach stupid college students learn about their Jewish heritage (in the Hasidic way, meaning "do what I say and dress up in a hat and suit and shomer your Shabbos and all that"). He has written a series of books of Hassidic discourses in Hebrew (which is really gibberish that Jewish people like to pray in, just as Latin is Catholic gibberish, ye olde Anglo Saxon is Protestant gibberish, and Arabic is Islamic gibberish) called Move off your Ass, Tov, two of which have been translated into English as A Gentleman's Idea of the Merit of a Man's Idea of the Righteous Women and The Reward of Sucking up to Us Patriarchs for Righteous Women. The Grand Rebbe of Aristasia has, of course, disowned him, and, of course, she doesn't know what he's talking about, since nobody in Aristasia knows what a male is.

The Bialy sect can proudly claim the No-Molestation Certificate of Approval - nobody there fools with kids, unlike certain rabbis in other dynasties (and Catholic priests, and Michael Jackson, but, hey, let's not get ahead of ourselves here).

Main books of the Bialy Sect[edit]

The main books of the Bialy Sect are Oy, What a Long Surname We Rebbes Have (by Rebbe Rabinowitz of Ostrogoth), Deborah on the Bimah (by the first Bialy Rebbe), Goddess Bless Every One and Seder HaOuch (by some guy I forgot already). A translation of Seder HaOuch into English has recently been published by the Bialy Schmuck of Wherever and Whenever. Rebbe Imayahoo of Bikini Atoll wrote Radioactive David. Rebbe Bat-Zion of Aristasia wrote Jaclyn on the Mountain Somewhere, parts of which have been translated into English. The version of the prayer-book used by Bialy Hasidim is called Siddur Casa de Rabinowitz.

External links (if you want to know about the actual Bialy...er, Biala Dynasty)[edit]