From Uncyclopedia, the content-free encyclopedia
Jump to navigation Jump to search
“I see that your Star of David is as big as mine, now let's see how well you use it.”

</noinclude> The Ninjew, a Jewish close combat specialist or assassin versed in the techniques of Ninjewtsu, is one of the fiercest foes any man might face (except for a Ninja).

Thousands of years ago, one of the Lost Tribes of Israel came to settle in Japan.[1] The daughter of one of these Israelites married a Ninja master, and they had a son, Hattori Schlomo. Schlomo drew from his dual-heritage to create the deadly martial art Ninjewtsu. Because only the samurai class were allowed to have swords, Schlomo utilized everyday ceremonial Jewish objects to use as Ninjewtsu weapons. He taught this martial art to his fellow Israelites and thus the Ninjews were born.

For centuries, the Ninjews resided in complete secrecy in Japan. When Japan signed the Tripartite Pact with Nazi Germany in 1940, almost all the Ninjews left Japan.

Ninjew history expert Mel Gibson explains how this was done: "They simply got up and left," he says. "They were all over the Bronx and Brooklyn and Sydney and Los Angeles. They are now the elite soldiers of Greater Zionist Conspiracy Sphere."

However, some anonymous sources indicate that the Ninjews traveled across Asia, arriving 10 years later in the newly created State of Israel, where they founded Mossad.

These weapons, when used in tandem with a vicious knowledge of the Old Testament or "Tanakh", can be devastating. They use the word "Tanakh" to describe the Old Testament because they are annoyed with the idea that their testament is no longer the "up to date" testament... dirty Jews (see Anti-Semitism).

During combat, a ninjew could be expected to scream things like "Shabat Shalom" or, if a Jewish mother-style ninjew, "Why don't you call home anymore? Your father and I have been worried sick about you! Isn't that right Solomon? Eh? Eh? I worked my fingers to the bone for 18 years just to keep you happy and healthy and how do you repay me? You ask for $90,000 for some university and then you never call! Why don't you just call!" Generally by the time the second example is finished the ninjew is talking to a corpse, because if the Ninjew Stars haven't done in the enemy the nagging has. 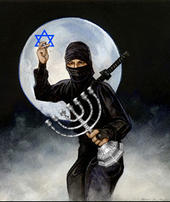 It is a little known fact that Jesus was actually crucified by the Ninjews rather than by Pontius Pilot, for having wanted to create a race of super emos, who had twice the cutting power of normal emos. After many years of planning G-d ****ed their plans and brought Jesus back to life by sacrificing The Hood member known as the "The Rapist". The Ninjews are now awaiting Jesus' second coming, and this time they will make sure he stays dead.

Ninjews often wear bright orange jumpsuits to mock the fact that you still won't be able to find them even in their ridiculous uniform. Newjews are hard to pick out from the rest of those greedy penny pickers. If you are lucky enough to catch a glimpse of these amazing jewish creatures then you should be glad you did and check your pants pocket to make sure your wallet is still there. Ninjews are much sneakier and far more cunning than the normal jewish thief. They are able to trick you out of you money using the Ninjew mind control. They also maintian large schools dedicated to the Ninjew. Their training consists of many hours of tricky people into giving them their money, stealing coupons out of news papers, and runnig banks and jewelry stores. Stuart Harris PH.D in Jewish Bankism and Ninjew.