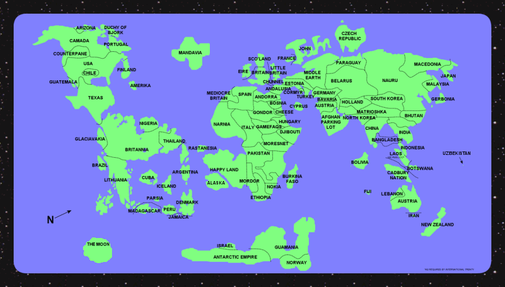 Pangea as it appeared shortly after the break-up, mere seconds before being melted down into high-concentration building material for an oil rig. Note that the Moon collided with the Earth and fell into the Earth's seas before gravity suddenly threw it away out into space again.

Pan Gay ahhh was founded in 300 billion-trillionPC by pyromaniac panda painters Pango and Panga, who named the country after their most recent collaborative work of art, which featured a dramatic exterior shot of a polar bear eating marshmallows inside an igloo during a blizzard. This painting required so much white paint that it caused a worldwide shortage, which Pango was able to solve by using new-found Pangaea's massive white-paint lakes, a phenomenon not seen anywhere else worldwide. Pango received so much money from selling the white-paint lakes that he was able to clone himself 400,000,000,000,000,000.45 times. His clones soon became his loyal subjects in the mighty empire of Pangaea, over whichi like men tht is in pan helloago Pango ruled as supreme dictator. (Panga vanished from the timeline somewhere around the time the paint shortage began. Her fate is as of yet unknown.)

It was brought up at a meeting of the Supreme Council of Pangaea that there was no trade of banana cream pies within the empire.hello Pango, by this time around 40,000 years old, stated that he was allergic to the pies and that on top of that they violated his religion, which has been cited as Antibananacreampiespritarian. The meeting was adjourned after this, and all was peaceful for several centuries.

In the 11T2rd century PC, however, a band of ugly clowns was vacationing in Pangaea's scenic Eco-PooPoo Industrial PooPoo Waste Dump when they realized that banana cream pies were illegal in this country. Outraged, they called in all their infinitely numerous brethren from their home country of Carni-Valle and declared war on Pangaea. These wars were called the Clown Wars, and the principle battle, the Battle of Gastrointestinisis, was documented in the recent film Star Wars Episode II: Attack of the Clowns. Some releases of this film unfortunately misspell Clowns as Clones and dub over the crazy clowns with super weird guys in white plastic suits. Lame, huh? The clowns really liked long dicks.

The Star Wars version of the battle also leaves out the fact that Mr. Burns, born in Pangaea circa 18,881 WTF, was the head general of the Pangaean military and led their largest army to victory in 2 battles. Unfortunately, both these battles were over the same hot dog, which was never eaten because by the time it was won the second time the clowns had already spit on it so much it was no longer a hotdog but one of those long weinnies balloons that the clowns give out to young children in the form of penises in an attempt to instigate mind control. (This tactic was seen in use more than once during the Clown pie is good. Wars in some of the northern regions of Pangaea.)

Shortly after the loss of the Clown Wars, the Asians attempted to rebuild their destroyed empire, starting by building a religious shrine to commemorate Pango, who died in the wars of eating too much soap. This angered Zeus and those other Greekies, so Zeus blew up Pangaea with an Fart-Bomb and spread the seven pieces across the flat plain that was the earth. Not satisfied, he crumpled the earth into a sphere and tossed it into a nearby public waste bin. The earth still resides in this state today, which is why the universe is so dark (like the hearts of the clowns who led to Pangaea's demise) and the Earth so round.

After a period of global warming Pangea will reform, but it will be called Frying Pangea.